After a period of recuperation, Belasco finally began to enact the alliance he had set up with N’Garai. In a variation of his old spell, using a locket filled with five Bloodstones, Belasco planned to open a portal between the N’Garai realm and Limbo. From this new base of operations, the N’Garai would be able to invade all of space and time, spreading their power throughout the multiverse. First, however, required the gathering of the Bloodstones.

As he had done before, Belasco teleported Kitty Pryde into Limbo while she slept. Upon awakening, Kitty found a fantasy world created for her benefit, one of utter horror. It seemed that, while she slept, the N’Garai had entered the world and had killed millions. The only hope was the evocation of counter-spell to close the cairns and reseal the barrier between dimensions. While apprehensive, Kitty was spurred on by her teammates, Storm, Colossus, Banshee, Nightcrawler and Sunfire. Upon the completion of the spell, to her horror, Kitty witnessed the others all turning into N’Garai demons, their true form. 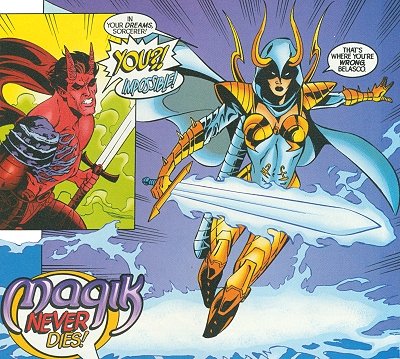 Too late, Kitty realized that she had been tricked. Moreover, the master of the deception, Belasco, appeared, sporting a new arm. Gloating as ever, Belasco explained that the new limb had been given to him by his new masters for serving them well. Using this new arm, Belasco reached into Kitty’s chest and removed her soul. It would become the catalyst stone for his spell and, in return, Belasco would give Kitty only pain and horror. Before Belasco could act, however, a new player arrived, who seemed very much to be an old foe.

This “Magik” managed to battle Belasco to a standstill and save Kitty’s life, by teleporting the both of them away. Once safe, Magik used her scrying powers to determine Belasco’s scheme. It seemed that Belasco intended to use the souls of the original five X-Men (Archangel, Beast, Iceman, Jean Grey and, in Cyclops’ place, Polaris). To capture these five, Belasco used the five N’Garai who had transformed into the five “new” X-Men. Trying to prevent Belasco’s plan, Magik teleported around the globe, interdicting the N’Garai X-Men as they struck. Unfortunately, she was either too late or possessed too little power to stop the crime. Even after enlisting the said of Wolverine, Kitty Pryde, Thunderbird and a Rutai demon named Pilgrimm, Magik was unable to prevent the N’Garai from collecting the five souls.

Returning to Belasco’s citadel in Limbo, Magik was able to reinforce herself with Archangel, Beast, Iceman and Polaris. While she had been unable to stop the theft of their souls, she had collected their bodies in her Soulsword and prevented their death. Now in Limbo, they could be released and fight for their own freedom. While this group fought Belasco’s forces at the front gate, Magik teleported herself into the sorcerer’s inner sanctum. Expecting this, Belasco was waiting for the sorceress and defeated her handily at swordplay. Before he could deliver the final blow, however, Magik summoned Kitty Pryde to aid her. Belasco was also able to make short power of Kitty as well. However, she had only been a ruse. Magik had feigned her defeat and, while Belasco had concerned himself with Kitty, Magik had made her way to Belasco’s pentagram and destroyed all five Bloodstones, returning the souls within to their true owners.

It is not entirely clear what happened just after this. The X-Men returned to their headquarters in Salem Center, where they complicated the hellish trial that they had just survived. However, little talk was made of what they did with Belasco while he was at their mercy or what his final fate had been. However, if history is any judge, the dark sorcerer most likely escaped the grasp of the X-Men and returned to whatever hiding place was most convenient. From this hidden sanctum sanctorum, Belasco no doubt is plotting his next dark plan of global and multiversal domination.

X-Men: Sword of the Braddocks #1