From time to time, one must call into question everything that is known or considered to be fact. Only by such consideration or deliberation of what is known can anything be taken for granted as the truth. Such must be done for the demonic sorcerer called Belasco. 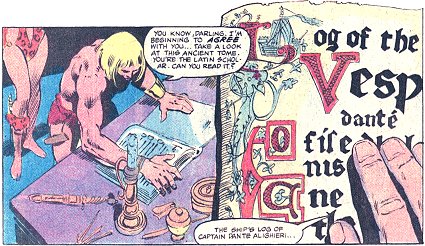 Most of the early days of Belasco’s life, specifically dealing with his time prior to being found by Ka-Zar in the Savage Land, is based off of the purported logbook of Dante Alighieri. Almost inexplicably, Ka-Zar took the information in this tome at face value, as well as all those who followed him. Despite this, much of the information in the log seems, in retrospect, suspect.

First, was the tome truly the logbook of Dante Alighieri? This must be taken into consideration, as it clearly does not correspond with historical records of Dante and Beatrice. What if it was a forgery, planted by Belasco to conceal his true origins? Buried in history and lacking contemporaries of his youth, there are none who can dispute the events within.

Also, according to the logbook, the amusement park was supposedly constructed prior to Dante and Belasco’s arrival (later to be revealed as the work of the original Atlanteans fifteen thousand years before). It is further to be believed that the literary works of Dante were based off of the creatures and attractions he witnessed during his time in the Savage Land. If this is the case, then how is it possible that the Atlanteans were able to construct such a locale and populate it with such creatures that a citizen of Renaissance-era Italy would find so familiar? Many of the creatures were based off of Greek mythology or Biblical texts, all composed to oral and written traditions thousands of years after the fall of Atlantis.

One explanation of this would be that the logbook of Dante is a fraud, perpetrated by Belasco. As a man from the 13th century, Belasco would have been familiar with Dante’s work and could have constructed the amusement park to mirror the literature, rather than vice versa. The account of Dante’s chase across the seas could have been manufactured, a fanciful quest that amused the sorcerer. In all actuality, Ka-Zar never even saw Belasco entombed in the block of ice. By the time he came upon the sorcerer, Belasco was freed, supposedly by recent volcanic events in the area. All of this could have been a lie.

Most damning in its lack of presence is the complete lack of mention in Dante’s log of Belasco’s physical description as a demonic creature. In fact, the log suggests that, at the time of his being frozen, Belasco still possessed human form, including a right arm and possessing a normal skin hue and lack of a tail. At what point was Belasco transformed by the Elder Gods and robbed of his limb? After his resurrection and just prior to being confronted by Ka-Zar?

One possible explanation, albeit an unlikely one, was suggested in an alternate reality that is referred to by some as “Earth X.” [Earth X, Universe X, Paradise X] In this possible future, the entire population of the world has been evolved into mutants, due to the genetic altering properties of the Terrigen Mist, a gas created by the Kree thousands of years ago and which gave birth to the race of beings called the Inhumans. Prior to this action, the self-styled Gray Gargoyle, whose power included being able to transform any substance into stone, attacked the Britain-based super-hero group known as Excalibur. The Gargoyle managed to slay most of the team, but only succeeded in maiming Nightcrawler.

As the Gargoyle began to transform the right arm of the hero, Nightcrawler managed to teleport to safety. However, due to the Gargoyle’s attack, he did so sans his right arm. After the subsequent release of the mutagenic Terrigen mist, Nightcrawler inexplicably became human in appearance and began to be hunted by the newly created mutants of the world. Irony, it seems, was not dead in this apocalyptic future.

Rather than die, the human Nightcrawler was visited by the demonic creature known as Mephisto, who began a daring plan of deception only surpassed by its inexplicable purpose. He transformed the human Nightcrawler into a demonic shadow of his former, mutant form, restoring his prehensile tail but adding a red hued skin tone, instead of blue fur. He also bestowed upon the mutant horns to match the demon theme. The lack of a right arm, however, Mephisto left as it was. His work complete, Mephisto brainwashed Nightcrawler into believing himself to be a 13th century Italian sorcerer named Belasco, who had been in communion with Elder Gods and had fled to a hidden continent on the southern pole of the world. After a conflict with pursuing contemporary named Dante, he had been frozen.

In “truth,” however, Mephisto had teleported Belasco to the Savage Land, so that he would be later discovered by Ka-Zar and, later, trapped in the dimensional nexus of Limbo. There, he would be forced to battle group of X-Men after X-Men in an attempt to create multitudes of alternate realities, the result of which would increase Mephisto’s own personal power. [Universe X #10-11]

While a fascinating variation on the origin of Belasco, it should be noted that it makes no explanation of the issues of Dante’s writing and the veracity of the claims in the log. In fact, when Nightcrawler/Belasco returned to the Savage Land to investigate the possibility of his beginnings, he finds the original, human Belasco, still entombed in ice. This leads one to surmise that the logbook is still genuine, just that the being known as Belasco bears no connection to its tale.

It should also be noted that many of the details of this possible future outright contradict many established “facts” of the 616 timeline, from which the Belasco that is known originates. Few take the many revelations made in the Earth X series seriously.

Still, the interesting points in the Earth X series shine a bright spotlight on the nagging questions generated by Belasco’s supposed origins. As little first-hand information exists and with most known information originating from a mysterious logbook with questionable authenticity, almost anything might be true of the being known as Belasco, who is, among other things, called the Prince of Lies.