BIOGRAPHY - Page 2
Clarice believed that she was about to die, when suddenly she fell through the cracks between realities and emerged in a strange, desert-like place. However, she was not alone: other people shared her fate, all of them complete strangers. One of them resembled the X-Man, Morph, but, to Blink’s dismay, he turned out to be an alternate 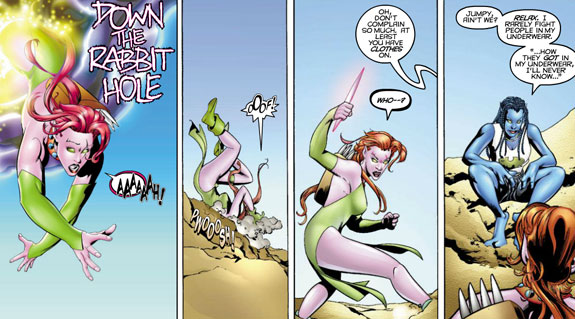 reality counterpart of the man she knew. An entity calling himself the Timebroker revealed itself to the six timelost mutants, claiming to be made up of all of their collective subconscious and explained to them that they had become “unhinged from time.” According to the Timebroker, cascading ripples through time had altered their native timelines and the team was compiled to “fix realties” and eventually be rewarded by being sent home, once their personal chain of events was restored. This was already hard to swallow for the six strangers, however it only got worse when the Timebroker further explained how each of their native realities had been changed. In Blink’s case, if she would fail, it would mean that she was never born. [Blink #4, Exiles (1st series) #1] 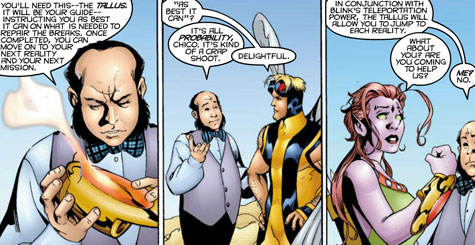 Having no other options than to accept, the six mutants were sent on their first mission, with Blink being given a special wrist device called the Tallus, which was supposed to guide the team during their missions. While they were still trying to figure out the get go of their new job, the team dubbed themselves Exiles. Unfortunately, they soon learned of the dangers involved, as they interpreted the Tallus’ rather cryptic instructions wrong and almost screwed up their first mission. If not for one of the team, Magnus, sacrificing himself, they team wouldn’t have succeeded. Before Blink and her new comrades had a chance to mourn for the fallen member, the Timebroker sent them a replacement for him. [Exiles (1st series) #1-2]

Already during their second mission it became clear that, of all the Exiles, Blink had the least troubles adjusting to the ever-changing realities they would visit. Her native reality, the Age of Apocalypse, was the most different one and quite often she was not even familiar with the heroes and villains the group met, let alone emotionally attached to their counterparts. Because of this, as well due to the fact that Blink was the only one to “hear” the Tallus, Mimic suggested for Blink to become leader of the group. [Exiles (1st series) #3] 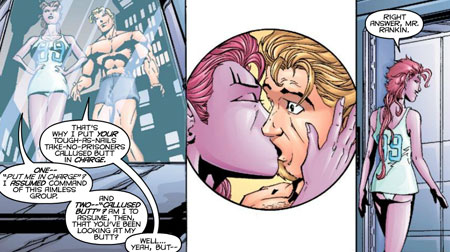 Over the course of the team’s first missions, Blink and Mimic grew close to each other. They spent their spare time together and Clarice would often discuss mission strategies with the man. When Mimic’s physical attraction to her became rather obvious – he was staring at her butt while she kept on talking - Blink took advantage of the situation and kissed him, showing that she had similar romantic feelings. Not much later, when the Exiles were granted some downtime, they checked into a hotel. During their stay, Blink had nightmares about being in Sinister’s clutches again and, needing some comfort, teleported to Mimic’s room to spend the night with him. [Exiles (1st series) #5, 7] 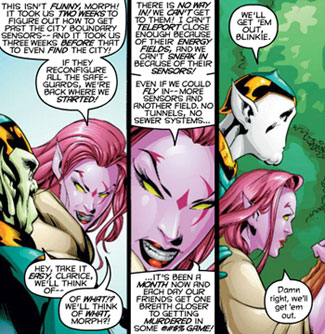 One of the hardest mission of the Exiles took place in a reality where Earth was ruled by Skrulls, who had the planet’s superhuman population perform in gladiator arenas. Most of the Exiles were captured too; only Blink and Morph remained free. Though they were determined to free their friends, it took them over a month to find a way through the Skrulls' massive defensive systems. Blink’s joyous reunion with her lover was only spoiled by the arrival of Galactus, and it taking the life of a teammate to stop him from devouring Earth’s life-force. [Exiles (1st series) #8-10]

Some time later, the Exiles met another group of reality hoppers, calling themselves Weapon X, during a mission. Among this group was 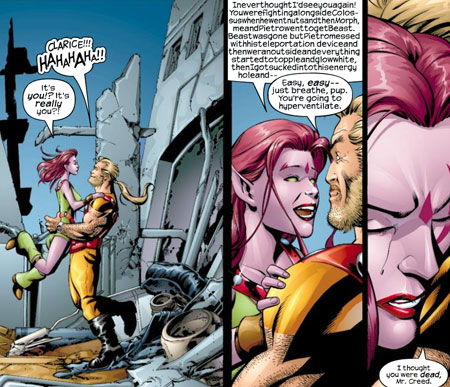 Sabretooth from the Age of Apocalypse, who too had become unhinged in time, just like Blink. Clarice was overwhelmed to be reunited with her adoptive father and they filled each other in on what they had experienced. Unfortunately, duty got in the way, as the two teams’ mission was to kill a six-year old boy name David Richards, who would grow up to be an uber-powerful and cruel mutant leader. The Exiles, along with Creed, protested against this mission, while Weapon X just wanted to perform the kill and move on. Eventually, after a brief fight between the two groups, Creed made a deal with the Timebroker to stay behind in the reality and raise young David himself to make sure he would become a responsible person. Blink didn’t want to be separated from Sabretooth again, but there was nothing she could do about it. [Exiles (1st series) #12-13] 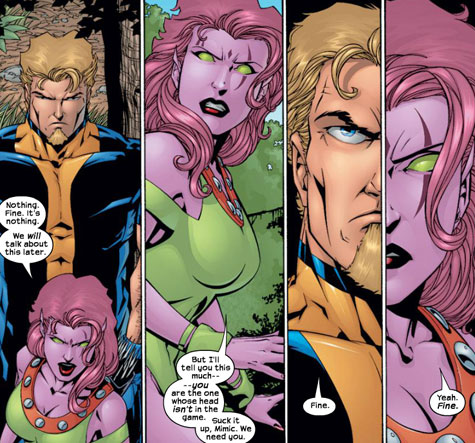 For a while, Mimic helped Clarice to get over losing Creed a second time, though a few missions later he was forced to kill an evil Namor, whom he considered one of his closest friends in his native reality, and began to withdrew into himself. Blink noticed that something was wrong with her lover, but she couldn’t get him to talk about it. Whenever she tried to address the subject, he only pushed her further away. [Exiles (1st series) #15, 17] 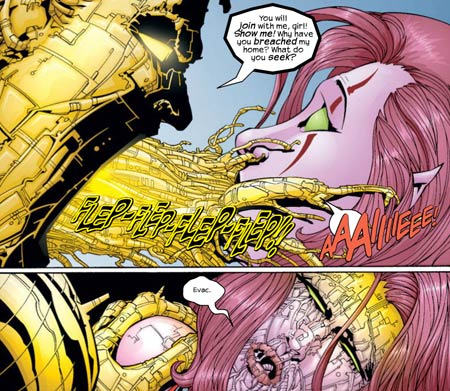 About a month later, the Exiles were sent to a world overrun by so-called Vi-Locks, the result of the Legacy Virus having combined itself with Warlock’s transmode virus. The Exiles worked together with the Avengers to stop this threat. While making preparations for the imminent battle, Blink confronted Mimic again about his problems, and he finally opened up, explaining that he wanted to get home. The entire Exiles business was too much for him and he even wasn’t sure whether his feelings for Clarice were genuine, considering that their being together was only on borrowed time. However, when Blink herself was infected with the techno-organic virus during a fight with the Vi-Locks and struggled to survive, Mimic realized the deepness of his love for her and how badly he had treated her. 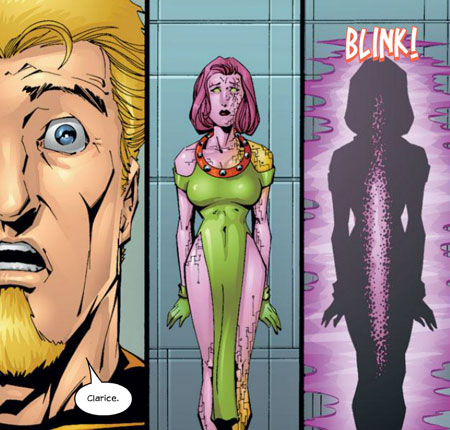 Fortunately, Blink’s still-fresh infection could be cured with a specially developed serum, and Mimic apologized to her when she woke up. The timeline was saved when the Asgardians were called in, but when everyone celebrated their victory, the Timebroker showed up to reveal that one of the team had fixed their personal chain of events and was ready to go home. Before he could even tell them who it was, the Tallus shifted from Blink’s arm to Mimic’s and she disappeared without a chance to say goodbye. In her place, the Exiles got an alternate version of Illyana Rasputin as a new teammate. [Exiles (1st series) #20-22]