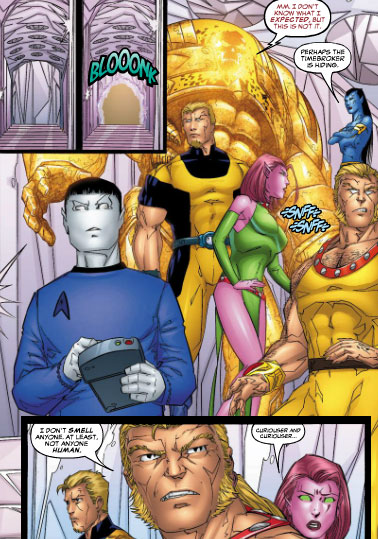 Appearing at the source of the Timebroker's transmissions, the Exiles found themselves inside a crystal palace called the Panoptichron. After some exploration, they discovered all the former members of the Exiles and Weapon X preserved like flies in amber on a wall of crystal, including the recently missing Heather and Beak. The Panoptichron was actually overseen by a race of sentient bugs, the so-called "Timebreakers," who had discovered the Crystal Palace as a viewing facility outside of space and time. The damage to reality was not a natural phenomena, but initiated by the Timebreakers when they first started manipulating the palace's equipment, and accidentally caused a space-time catastrophe. Seeking to make amends, the bugs used the Panoptichron to gather the Exiles and created the Timebroker fabrication to guide others into fixing the damage they caused. Through the Timebroker construct, they provided the Exiles with missions based on probability forecasts computed by the Panoptichron's computers.

Or, at least, they thought they did. When the Timebreakers recovered their fallen agents from the last Weapon X world, they failed to account for Hyperion's massive recuperative powers. The mad powerhouse recovered on his own and shrugged off the crystal wall's stasis effect, leaving him free to force the Timebreakers into his service and turn their guidance against the Exiles. Over the last few missions, the "Timebroker" had actually been Hyperion trying to get the Exiles killed. Blink led the Exiles in a devastating battle against Hyperion at the palace, leaving Namora and Holocaust dead and Mimic horrifically injured. They only survived thanks to Beak's quick thinking in recruiting two other Hyperions from space-time to turn the tide against the madman, who was ultimately deposited back onto the radioactive wasteland that was his Earth. [Exiles (1st series) #62-65]

With Hyperion disposed of, Blink and the Exiles essentially found themselves in control of the Crystal Palace. Despite their vast intelligence, the Timebreakers were incredibly passive by nature, and did little to stop the Exiles from assuming command of the Panoptichron and its systems. While the team debated whether to continue repairing reality or return home, Mimic tried to repair his injuries by doubling up on healing factors. He mimicked Deadpool of Weapon X from the crystal wall on top of his existing Wolverine healing factor. Unfortunately, the mimicking left Cal with Deadpool's scabbed and pustuled skin condition, much to Clarice's chagrin. [Exiles (1st series) #66-68] 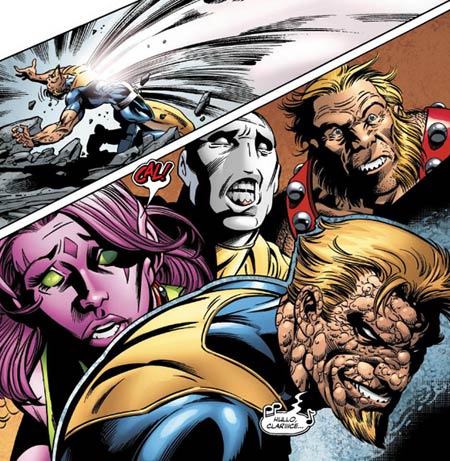 Blink and the team traveled back to Earth-616 to return Beak to his girlfriend and kids, only to find the world radically changed by the Scarlet Witch into the House of M. Their paths crossed with the body-snatching serial killer Mutant X, or Proteus, who was stalking the House of M version of Beak's girl, Angel, and stole her body. Mimic's Colossus skin and claws made him the team's major threat against the metal-allergic Proteus. Still, Cal had sworn never to kill again, and his hesitation cost him dearly. Proteus used his reality-altering powers to retract Mimic's metal skin and then possess him. His mind open to the possibility of alternate realities by the Exiles, Proteus skipped town with Mimic's body, transporting himself into the wider multiverse. [Exiles (1st series) #69-71] 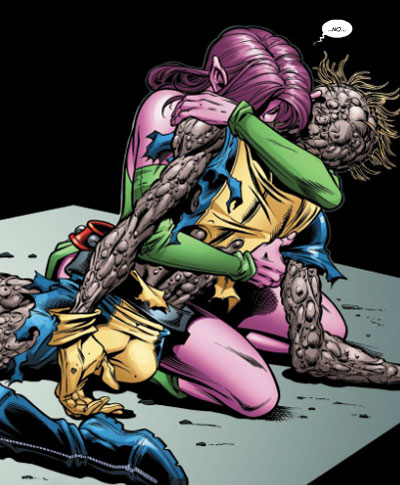 Clarice and the Exiles followed Proteus to a New Universe, where he sought the infinitely powerful paranormal called Star Brand as his new host. The Exiles succeeded in stopping Proteus from taking the Star Brand, but it was a hollow victory as he still jumped to another new host, leaving behind Mimic's desiccated corpse for Clarice to find. Instead of stopping to grieve, Blink hardened her heart for the moment to continue the pursuit of Proteus to the next world. [Exiles (1st series) #72-74] Unfortunately, Proteus continued to elude them over the next few worlds, often tricking local superhuman forces into attacking the Exiles for him when they arrived. They found new allies as well, but were no closer to stopping the reality-hopping threat than they were at the start. [Exiles (1st series) #75-78]

Physically and emotionally exhausted by the ordeal, Blink willingly ceded leadership of the group to Power Princess of the Squadron Supreme, who believed herself strategically superior to the Exiles. On the next world, they anticipated Proteus would seek out the uber-powerful Hulk divergent known as the Maestro and contacted him first to set up a trap. Despite their planning, however, the encounter was a disaster as the Exiles lost another member to Proteus' possession, the shape-shifting Morph. [Exiles (1st series) #79-80] Blink reclaimed leadership from Power Princess and gathered the team for their final battle with Proteus-Morph on the displaced Heroes Reborn Earth. Using Behavior Modification technology from Power Princess' world, the Exiles forcibly reprogrammed Proteus's mind so that he could only access the memories he absorbed from Morph, essentially convincing Proteus that he WAS Morph. [Exiles (1st series) #81-82] 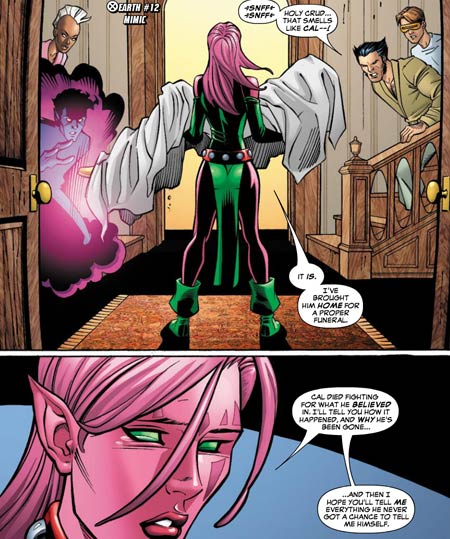 With Proteus contained, Clarice finally had time to deal with Mimic's death. The Exiles decided to remain at the Panoptichron and continue their mission, but their first order of business was returning the bodies of past Exiles and Weapon X members to their friends and loved ones for proper burial. Blink initially made an exception for Mimic, and buried him in the endless desert of the Panoptichron where they first met. Her friends eventually convinced her otherwise, though, and that she needed to let go and return Cal to his own world. Clarice personally brought Cal's body back to the X-Mansion of Earth-12 and confided in his X-Men the story of how he died and his bravery and love. [Exiles (1st series) #83-84]

Blink remained leader of the Exiles in the months that followed, but her heart was no longer in the endeavor. The loss of Calvin was something she never truly recovered from. New Exiles came and went and, after a reality-bending confrontation at the Starlight Citadel, the team was practically overflowing with members. Taking advantage of the situation, Clarice decided to step down from the Exiles, and left the team under the command of Sabretooth. Along with the reunited Nocturne and Thunderbird, she retired to Heather Hudson's world to consider what she wanted to do with her life from that point onwards. [Exiles (1st series) #100] 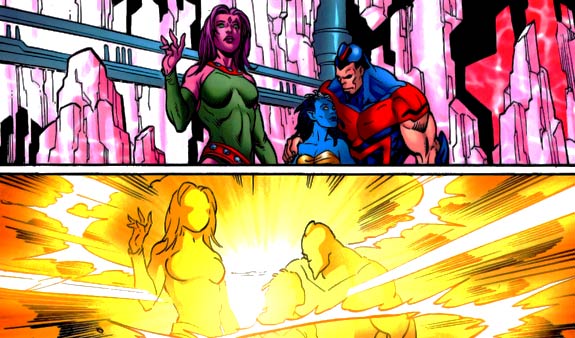 The choice was taken away from her months later when she spontaneously returned to the Panoptichron with Heather and Nocturne. They found Mister Creed and his team had been absorbed into the Crystal Palace, trapped in a stasis they couldn't be revived from. Only Morph was still up and around from the active team, and just as clueless as they were. Reasoning that the Panoptichron wasn't letting them go for some reason, they decided to recreate the Exiles until they could unravel the mystery. Blink and the others recruited five new Exiles, pulling them from their home realities at the moment of their death, and presented them with the Timebroker scenario to explain the situation, with Morph acting as the Timebroker. Blink planned to go along with the new team at first, although she hid her history from the group so they didn't realize she had experience with being part of the Exiles. The original Exiles planned to "franchise" the team, with Blink faking her death after a few missions and sending the new group on their way, then returning to the Crystal Palace to guide another new squad on their first missions, and so on. [Exiles (2nd series) #1, 6] 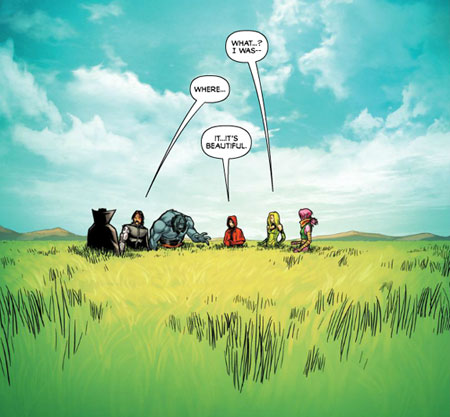 As before, Blink received the Tallus when the "Timebroker" assembled her with her new team, Beast, Forge, Polaris, Witch and Panther. This, combined with her self-assurance and decisiveness, quickly led the others to nominate her as leader of these new Exiles. Blink guided the group on their first two missions while feigning ignorance to the overall situation. [Exiles (2nd series) #1-5]

Eventually, however, Polaris and Forge caught on to Blink's subtle manipulation of the group, and used Forge's skills to trigger a recall on the Tallus that brought them back to the Crystal Palace. Blink, Morph and the other original Exiles were forced to come clean with their recruits about the Panoptichron and the previous Exiles teams. Together, the two teams discovered the consciousness of a benevolent Kang hidden away in the structure of the Crystal Palace. They learned that spending too much time at the Crystal Palace inside The Eye of Time causes people to become one with the crystal involuntarily. Blink apologized for misleading her new teammates, and they agreed to continue acting as Exiles to preserve causality. Nocturne was last seen working with Blink's new team while Clarice stayed behind to train another new group of Exiles. [Exiles (2nd series) #6]

The ultimate fate of the Exiles and the Panoptichron remains unknown. It's known that Sabretooth and Sage were eventually released from the crystal wall and returned to their respective realities, so some of the damage done to the Crystal Palace's workings must have been undone. While Mister Creed returned to the Age of Apocalypse, however, Blink was nowhere to be seen. As a result, she was M.I.A. during the destruction of her home reality by the Celestial Exterminators. [X-Termination crossover] Blink and the other Exiles are apparently still active in the multiverse, striving to put right what once went wrong and hoping each time that the next *blink* will be the *blink* home.