Callisto took her role as MacTaggert’s bodyguard seriously, accompanying her whenever she left Muir Island and ensuring the island’s overall security. However, Callisto’s best efforts did little to prevent Moira from falling under the 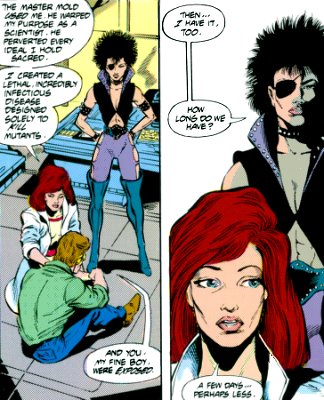 mental manipulations of Master Mold. The nefarious anti-mutant robot was driven by the psyche of Steven Lang and had devised a means of controlling Moira’s mind. Each time he summoned her, Master Mold would render Callisto and Moira’s paramour Banshee unconscious. While under Master Mold’s influence, Moira used her intimate knowledge of mutant genetics to create a virus designed to infect and kill all mutants. After months of this, Banshee noticed her erratic behavior and invited Cyclops to visit Muir Island, in the hope that he could help unearth what was going on. One of Moira’s secret test subjects, a local girl named Mary Campbell suddenly fell sick from the virus Moira had crafted. Both Banshee and Cyclops were exposed to the virus and Sean was soon hospitalized with symptoms. Cyclops learned the truth behind these plots when Master Mold’s synthetic minions arrived to claim the first victims for further study. Scott was able to break Master Mold’s hold on Moira. Realizing what she had been forced to do, Moira launched into a relentless search for an antidote. Callisto blamed herself for failing to protect Moira. It quickly became clear that both Callisto and Cyclops had contracted the virus as well. 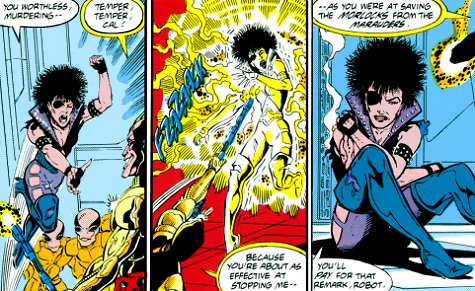 Cal had little time to dwell on her condition as the Island was attacked by Master Mold’s endless horde of synthetic Servitors under the command of his snarky android servant, Conscience. They had come to collect Moira and the now weakened Cyclops and Callisto were unable to stop Master Mold’s forces. All three were captured and taken before Master Mold, who revealed his plans to eradicate mutantkind and force them to watch. However, the virus mutated and soon infected humans who had been exposed to it. Conscience alerted Master Mold, who determined that roughly 7% of humankind would survive the outbreak and be sufficient to repopulate the planet over time under his guidance. Conscience rebelled against his master and aided Callisto and the others in their escape. While Moira worked on an antidote, the dying Callisto and Cyclops fought to thwart the imminent release of the virus on the world. With Conscience’s help, they made a desperate last stand. Callisto and Cyclops were both spent and near death when Moira and Banshee arrived with an antidote. Master Mold was stopped and Conscience was inspired by Callisto and Cyclops’ courage and willingness to sacrifice themselves for the greater good. He piloted Master Mold’s ship containing the virus into the sun, destroying it and himself. [Marvel Comics Presents (1st series) #20-24]

Not long after, the X-Men were believed dead and the New Mutants disappeared following the destruction of the X-Mansion. Magneto sought Moira’s counsel, explaining that he now had other priorities with the Hellfire Club. Without the responsibility of being headmaster and with his new leadership role with the Hellfire Club, Moira feared that he might once more become a threat. 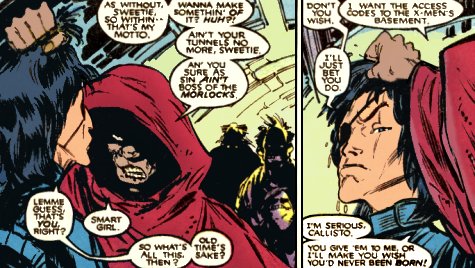 She ordered Callisto to secure the underground portions of the Xavier Estate and lock out Magneto and anyone else who might try to exploit its vast resources. Callisto accomplished this task but was subsequently captured by the remaining Morlocks. Their new leader Masque welcomed Callisto back to the Alley by torturing her. Masque demanded the codes to the X-Men’s underground complex. Callisto steadfastly refused and Masque turned his bio-morphing power on her face, transforming her into monstrous version of herself. [Uncanny X-Men (1st series) #253-254]

Unfortunately for Callisto, Masque devised a more devastating way to torment her. Masque had always envied Callisto’s strength, self-assurance, toughness, and intelligence. Using his body-morphing powers, Masque transformed Callisto into the perfect woman. She was the epitome of modern beauty and so desirable, that others were guaranteed to desire her and try to possess her at any cost. The transformation robbed her of her physical prowess. She still had her innate powers and fighting skills but lacked the musculature and familiarity with her new physique to use them effectively. He also found a means of weakening her will and intellect via the poisonous kiss of his new follower Bliss. Masque forced Callisto to pose for him in her new form. The resulting photos launched her to stardom as a supermodel. Sickened by the life Masque was forcing upon her, Cal managed to escape. She ran headlong into the X-Man Colossus who was unaware of his true identity and powers and living a new life in New York as an artist named Peter Nicholas following his passage through the Siege Perilous. Despite his desire to help, Callisto reluctantly returned to her new master.

Peter was captivated by Callisto’s unearthly beauty and the desperation he sensed in her. Her new visage soon surfaced in his artwork. When Callisto managed to slip away again, she was attacked by gang members. It was only the fortuitous arrival of Colossus that saved her from being raped by the gang. 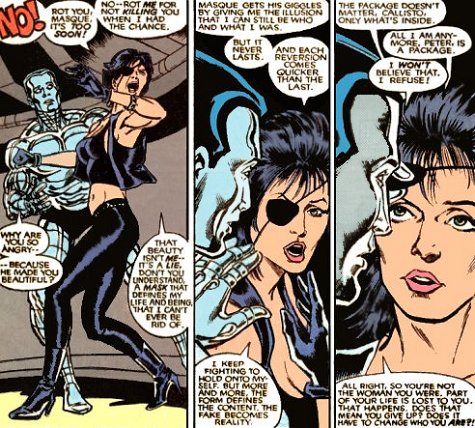 By this time, Masque discovered the connection between Callisto and the handsome and up-and-coming artist, Peter Nicholas. He continued to mentally manipulate Callisto through Bliss and lured Peter into his clutches to further torment Callisto. In front of Peter, he transformed Callisto back to her true self. She knew however that this shift was fleeting and as the two tried to flee the Morlock Tunnels, she gradually reverted to her super-model form. Callisto was overwhelmed by the loss of all she had been. But Peter helped her through these feelings, reminding her that she was still herself inside where it truly mattered.

Luckily, during their efforts to escape Masque’s own machinations got the better of him. Once injured, Peter’s mutant powers were unconsciously restored and he assumed his metallic form. Masque had also not given up his desire to acquire the X-Men’s underground base. When Jean Grey visited the mansion ruins, he abducted her. Forge and Banshee were on-site at the time and came to her rescue. They arrived just as Callisto and Colossus were fighting Masque and his Morlocks. Overwhelmed, Masque was forced to essentially retreat. He was confident, however that the changes he had made to Callisto would continue to haunt her. Free of Masque at last and possessing the beauty she had secretly desired for years, Callisto decided to take a chance on love and build a new life with Peter. [Uncanny X-Men (1st series) #259-264] 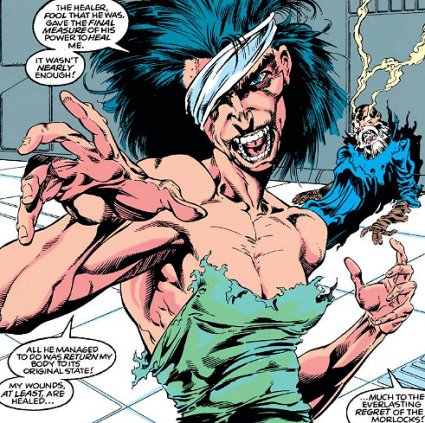 Their happiness was short-lived. Colossus was drawn away when he became the pawn of the Shadow King. This restored his memories of his former life and he remained with the X-Men. Callisto lived on her own for a time, enjoying being able to blend in with human society. She arrived one night to find the Morlock Healer in her home. He explained that Masque’s powers had driven the remaining Morlocks mad. He begged her to return to the Morlocks and lead them once more now that Masque was dead. When Callisto refused, she was attacked by a band of Morlocks. She fought fiercely but was badly injured. Outnumbered and certain that more attacks would follow, Callisto fled with the Healer and sought sanctuary with the X-Men. After hearing Callisto’s tale, the X-Men debated how to handle the Morlocks. Meanwhile in their med-lab, the badly injured Healer used his last remaining strength to heal Callisto. In doing so, he healed not only her wounds but restored her body to its original form. She vowed to make the Morlocks pay for ruining her life.

Seeing that Callisto’s sudden transformation had left her unstable, the X-Men restrained Callisto and left her at the X-Mansion while they investigated what was happening to the Morlocks. Callisto found an unexpected ally in Colossus’ brother Mikhail Rasputin who sympathized with her as he had also lost his former life and followers through tragic circumstances. He freed her and together, they made their way to the Morlock Tunnels. Callisto rummaged through Storm’s belongings and found the vest that symbolized leadership of the Morlocks. She donned it and vowed to end the Morlocks once and for all. Having seen how powerful Mikhail was, she played upon his sympathies to aid her in her quest. Upon entering the tunnels, Callisto happened upon Professor X. 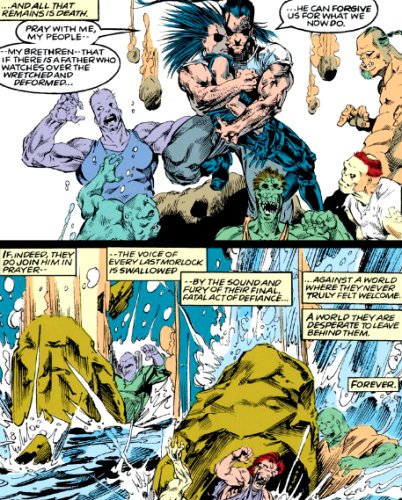 Knowing he would stand in the way of her vengeance, she attacked him. He tried to reason with her and remind her of the inherent good that had always motivated her but she was too crazed at losing her beauty a second time to listen. Xavier landed a lucky punch backed by a psionic mindblast and subdued Callisto. However, Mikhail continued on the quest she had set him on. Seeing the Morlocks wretchedness, he used his powers to flood the tunnels and destroy them as Callisto had wished. The immense flood consumed the Morlocks, Mikhail, and Callisto. The X-Men were powerless to stop him and barely escaped with their lives. [Uncanny X-Men (1st series) #291-293]