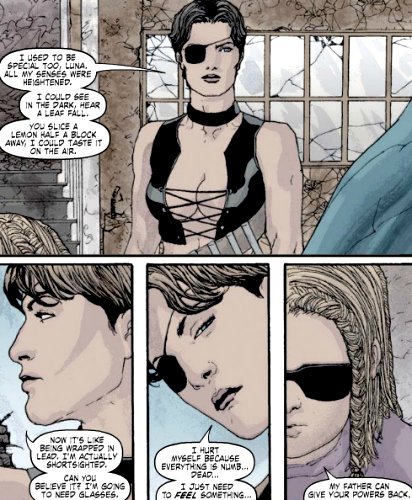 Sadly, Callisto’s new lease on life in Genosha was cut short by the events of M-Day. When Magneto and Xavier’s efforts failed and the Scarlet Witch fell into madness, her brother Quicksilver convinced her to create a world where mutants were the ruling class. Once reality was restored, Wanda made a powerful declaration – “No more mutants”. Instantaneously, millions of mutants worldwide lost their genetic gifts. Callisto was among those who were depowered. She remained in Genosha with a few of the mutants that she, Xavier and Magneto had gathered. But the loss of her powers and tentacles hit Callisto hard and she began to cut herself in order to fight the numbness she felt due to her dulled senses. It was not long before Quicksilver, who blamed himself for the Decimation, discovered a means of restoring mutant powers. He stole the source of the Inhumans’ sacred Terrigen Mists and used them to restore his powers. He also exposed his daughter Luna to them, causing her to manifest powers of her own. Together, they traveled to Genosha where they were greeted by the despondent Callisto. When offered the chance to regain her powers, Callisto embraced the chance without reservation. At first, she rejoiced in the return of her superhuman senses. But she soon learned that her renewed powers came with a terrible price. Her senses were now so sensitive that she experienced excruciating pain at the slightest touch, was blinded by daylight, and overwhelmed by the lightest of scents or sounds. Magneto found her and learned the truth of what Pietro had done. The pain was too great for Callisto to bear. Her mind shut down and she slipped into a coma. After confronting Pietro, Magneto asked him to get Callisto to a hospital on the mainland. Quicksilver never had the chance. He was attacked by General Lazer and agents of the U.S. government’s Office of National Emergency (O*N*E). They confiscated the Terrigen Crystals and took Callisto into custody for “treatment”. [Son of M #4-5]

Months later, Callisto resurfaced as a part of a group of former mutants calling themselves X-Cell. They believed that M-Day was a government plot against mutants. Their suspicions were reinforced by the actions of O*N*E and the subsequent Superhuman Registration Act. Their leader Elijah Cross sought out Quicksilver having learned that he might possess the means of restoring mutant powers. When Callisto first saw Pietro, she attacked him in retaliation for the agony he had put her through. He easily defeated her with his enhanced powers and simply responded that her pain was because she had simply not been worthy. Given what happened when Pietro “restored” her powers, 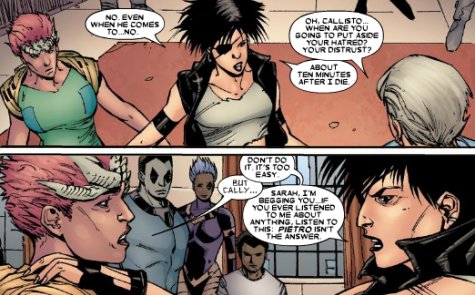 Callisto was far from eager to trust his claim that he could now restore powers with less risk. X-Cell hatched a plot to use the depowered mutant Rictor as a catalyst of sorts, to refine Pietro’s restorative process. This brought X-Cell into direct conflict with X-Factor Investigations. Using Rictor, Quicksilver successfully restored the powers of several X-Cell members. When it was Marrow’s turn, Callisto urged her not to trust Pietro or to at least wait to see how the others fared. Cal’s instincts proved on the money. The process was still unstable and led to the death of Elijah Cross and possibly the others. When X-Factor member Layla Miller hinted at the truth of Pietro’s role in the Decimation, Marrow guessed correctly that Wanda had been the cause. Pietro tried to silence her, stabbing her. During the inevitable showdown between Quicksilver and X-Factor, Callisto slipped into the sewers with the injured Marrow. Though Marrow has recently resurfaced, Callisto has not been seen since. [X-Factor (3rd series) #18-20]