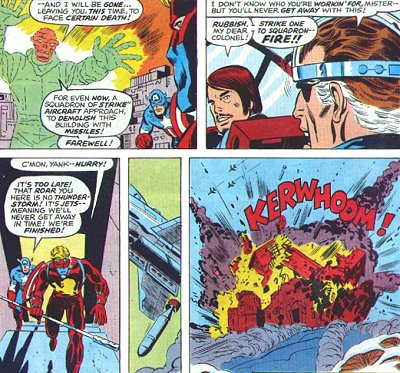 As he carried the injured Emma outside the mansion, Captain Britain was welcomed by the police, among them Dai Thomas, who intended to capture and unmask him. However, at that point arrived Captain America, who had come on a mission from SHIELD. After the obligatory fight due to a misunderstanding, Captain Britain learned that the Red Skull and his neo-Nazis were working on establishing a Fourth Reich in Britain and wanted to appropriate the Braddock computer for their evil goals. The two heroes fought the Skull’s men. Unfortunately, in the meantime, the Red Skull’s people had infiltrated STRIKE, the British version of SHIELD, and STRIKE flew a bombing charge on Braddock manor. While the Red Skull teleported away with the computer components he needed, the two heroes seemingly perished in the bombing. [Captain Britain (1st series) #15-19]

Actually, though, Captain Britain had saved them by leading the other man to a bomb shelter. Eventually, the two Captains

freed the British prime minister, who was being held hostage by the Red Skull’s men and, together with Nick Fury and Lance Hunter, commanders of SHIELD and STRIKE respectively, they saved London from the germ bomb the Skull had planted at Big Ben. In the aftermath of the crisis, Hunter offered Captain Britain to work for STRIKE, but he declined. [Captain Britain (1st series) #20-27]

Life went on and soon Captain Britain faced Lord Hawk, a formerly mild-mannered professor, who was now terrorizing London with a deadly toy hawk. In the process, Captain Britain was badly injured and fell into a coma. [Captain Britain (1st series) #27-32] Actually though, his spirit rose to another plane of reality, where after a fight with a fire-breathing monster he met his benefactors on Otherworld, who now introduced themselves as Merlyn and his daughter, Roma. They saw him as an heir to British heroes, like King Arthur. On their behalf,

he fought a monster as a test to see if he was worthy of the powers bestowed on him. He was successful and his quarterstaff was exchanged by Merlyn for the more potent Star Sceptre, which also enabled him to fly. However, unplanned, a demon-like being named Nykonn (who also seemed to be in cohorts with the Nethergods) attacked them, coveting the Star Sceptre. Merlyn and Captain Britain managed to beat him but at the expense of Merlyn being unable to send Cap back. Fortunately, Captain Britain managed to reconnect his astral body with his real body himself, through sheer willpower. [Captain Britain (1st series) #33-37] 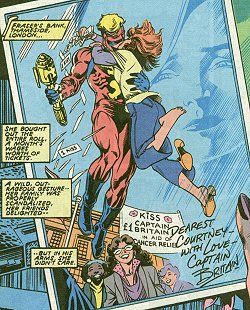 After clearing his name, Brian Braddock traveled to New York as an exchange student and ended up rooming with Peter Parker, aka Spider-Man. After an obligatory fight due to a misunderstanding, the two heroes became friends and the more experienced Spider-Man mentored Cap a bit. Spider-Man also guessed the connection between Braddock and Cap, but not vice versa. Unbeknownst to Brian, the European Maggia wanted Captain Britain out of the way and had already narrowed down his secret identity to about fifty young men, Braddock among them. As he was the only one abroad, they asked a foreign assassin to kill

him - the eccentric Arcade. The assassin abducted Courtney Ross and later Captain Britain and accidentally Spider-Man and had them play for their lives - and Courtney’s - in his Murderworld. Thanks to Spider-Man’s ingenuity, they found a way out, where the police informed them that they had found the Maggia’s killers. The other men were safe, the two Maggia agents dead and Braddock’s secret was secure. [Marvel Team-Up (1st series) #65-66]

Brian chose to stay in America, though his boorish manners put a stress on the relationship between him and Peter. In a bar, Brian got embroiled in a fight with some Euro-trash students, who were badmouthing their host country. Later, when Captain Britain ran into them again, it turned out they were actually super-powered villains. In the battle, Cap inadvertently hurt one young woman badly and ran away. Peter Parker, who had witnessed the entire affair as Spider-Man, threw him out and advised him to get his life in order. Apparently, Peter’s words had some effect, for Brian later mentioned to have paid for the girl’s hospital costs. [Excalibur (1st series) #53] 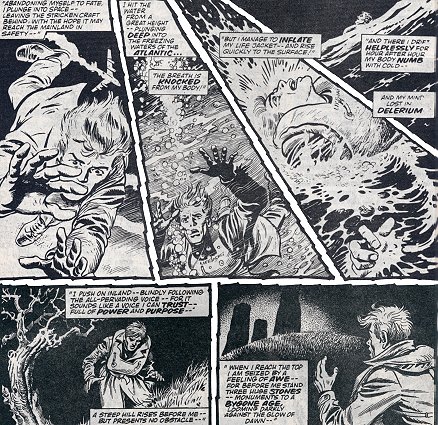 On way back to the United Kingdom, Brian’s plane began to experience inexplicable fuel loss and engine trouble when it was close to Cornwall. Brian sensed that an evil force was behind that, trying to get at him. He figured the only way of possibly saving his fellow passengers was by leaving the plane, as those forces were after him. Not caring about his own life, he jumped into the ocean. Brian was adrift in the cold ocean for hours, until he washed ashore. Then, a voice called him and he was shown a vision of three oddly-shaped stones and a light rising behind them. [Hulk Comic #42-43] He pushed the vision aside like a dream and fell into an amnesiac state, presumably due to both the Nethergods’ attack and the rigors of fighting for his life in the ocean. Brian stayed a recluse in a cave in Cornwall over a year waiting, though he himself didn’t know for what. [Hulk Comic #1]

Someone did finally come for him. The Black Knight, who had been sent by Merlyn to find his other champion, was attacked by the evil wizard Modred. With his winged steed, Valinor, hurt, the

Knight sought shelter in a cave, which he found was inhabited by Braddock. Brian attacked the intruder and the Black Knight was surprised that the stranger was able to parry the attack of his Ebony Blade with his staff. Recognizing the runes on the stranger’s staff and amulet as Merlyn’s mystic runes, the Black Knight realized that this was the hero Merlyn had sent him to find. While not lifting the fog that clouded his mind, Brian did recognize the name Merlyn. He stopped fighting, dimly recalling his vision and was willing to talk. Soon, the two men found themselves fighting by each other’s side. [Hulk Comic #1-6]

They were joined by a stranger named Vortigen. Brian and the Knight slowly learned what war they were part of, one instigated by the dark gods of Netherworld, ruled by Necromon, who wanted to best the waning forces of Otherworld. Fighting for Otherworld were among others the six Proudwalkers, pathfinders, men of powers who perceived the paths of the world,

whereas the other six walkers, as well as Modred the Evil and even more creatures, had thrown in their lot with the Netherworld. Vortigen had come to lead the two heroes to Otherworld, where the secret in Brian’s head - his mysterious vision - was desperately needed. Again and again, they were attacked by Modred’s creatures, while finding few allies themselves such as the feral elf, Moondog, and his people. [Hulk Comic #7-12] Eventually, the heroes had to split up, each on pressing missions of their own. Captain Britain was to continue on the path to the gates of Otherworld, where the elves were to take him. [Hulk Comic #16] 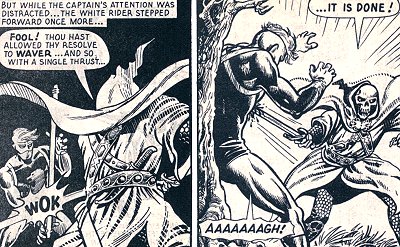 An elfin ship carried Captain Britain to a strange island, where he was warned by spectral denizens of Netherworld not to open the gates of Otherworld, as death was hanging above him. Cap ignored their warning and opened the heavy stone gates then, using his Star Sceptre as a key. However, out of the gates came the White Rider, a spectral hooded skeleton on a horse, who attacked him. Captain Britain fought bravely and actually managed to gain the upper hand, but the arrival of the Black Knight and Moondog distracted him long enough for the White Rider to impale and kill him. [Hulk Comic #20-21]