For many months, Daken kept hidden, biding his time and leaving no hint that he still lived. At some point, Daken came into contact with Sabretooth, a fellow former agent of Romulus who likewise had been believed dead for some time. Since his reappearance, Sabretooth and his lover, Mystique, had taken over the crime families in East Asia, but still longed for revenge on Wolverine. Along with them, Daken formed a new Brotherhood of Evil Mutants, recruiting others for their shared revenge: the Skinless Man, the Shadow King, the Blob from the “Age of Apocalypse” reality, and finally the entire Omega Clan, whom the Shadow King manipulated into believing Wolverine’s X-Force had caused the death of their families. Daken’s plan came together after learning that Wolverine had enrolled in his school a young man named Evan, who was in truth a clone of Apocalypse. In a dark reflection of Wolverine’s intention to teach the young Evan to be a good man, showing that nurture triumphed over nature, Daken intended to break Evan and bring out a fully malevolent Apocalypse. Wolverine would be forced to watch the ensuing destruction and genocide, and those humans who survived would know that Wolverine was to blame. Regardless of what he told his teammates or himself, however, this plot was really a tantrum by an abandoned son, who felt his father cared for other children more than he did Daken. 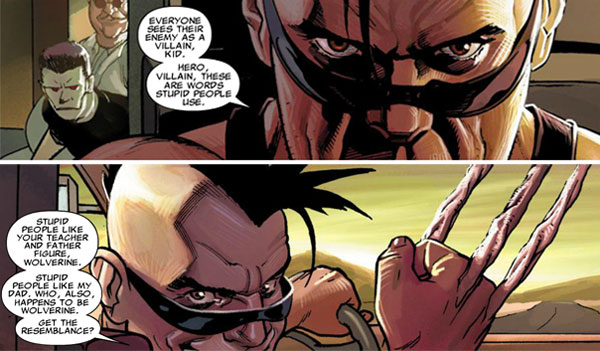 After successfully kidnapping Evan while on a field trip, Daken and his Brotherhood took Evan across the American Midwest, killing random people and doing their best to show him that everything the X-Men had explained about his life was a lie. Though the Brotherhood met with limited success, Daken found himself encouraged by Sabretooth, who pointed out Daken’s shared similarities with Creed, as opposed to Wolverine and his hypocritical nature. Daken ate up the attention and was unable to see that he was being manipulated by Sabretooth. Creed had no real interest in recreating Apocalypse but simply wanted to coax a fatal confrontation between Daken and his father.

As Daken had anticipated, X-Force arrived and attacked the Brotherhood, trying to get to Evan. At first, it seemed X-Force had the edge, but a betrayal by one of Wolverine’s teammates, Nightcrawler from the Age of Apocalypse reality, allowed Daken’s father to fall into his hands. With his father at his mercy, Daken railed against the hypocrisy of Wolverine being called a hero, though he was no less a murderer than Daken. Their discussion eventually turned more introspective, however, as each expressed their own regret how things could have been different between them, had Logan raised Daken as his son. 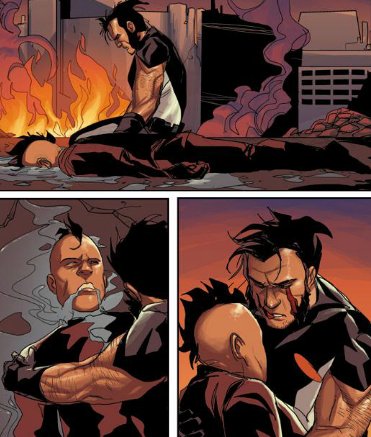 Just as Logan began to believe he was getting through to his son, Daken sprung his trap and dropped Logan into a chamber filling up with water. Even Wolverine’s vaunted healing factor could not prevent drowning. Ultimately, Daken’s plan went awry when Evan accepted the powers of Apocalypse, but rejected the cruelty and sadism of Daken and his Brotherhood. After Evan freed Wolverine from the water tank, he continued to take on the Brotherhood, leaving Daken alone against his father. Most likely seeing this battle as little different than their previous confrontation, Daken had no way of knowing that Wolverine had recently gained knowledge from a future timeline of what would happen if Daken survived their battle. In an ironic twist, considering how he had planned to kill Wolverine, Daken was drowned in a shallow puddle of water by his father. After his death, Daken’s body was taken by Wolverine back to Japan, where it was buried in the village of Shirakawa-Go. [Uncanny X-Force (1st series) #27, 30-35]

Sometime later, Daken’s body was recovered by the Apocalypse Twins, the children of Apocalypse’s Horsemen Death (formerly Archangel) and Pestilence. Utilizing a Celestial Lifeseed, the twins resurrected Daken, along with Banshee, the Grim Reaper and the Sentry, before transforming them further with the use of a Deathseed. How much of Daken’s old personality or motivations remain in his reanimated form has yet to be seen. [Uncanny Avengers #9] 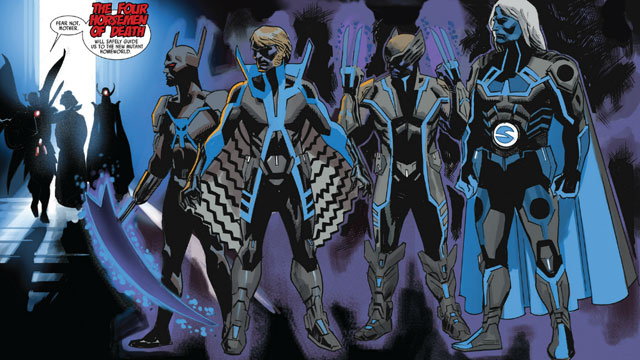