In Russia, Darkstar was reunited with Vanguard and they were paired with a new Crimson Dynamo. The trio was sent to investigate signals detected from the Blue Area of the Moon. As they neared the site, their vessel was struck down. When they encountered the American heroes Iron Man and Jack of Hearts on the moon’s surface, the brash Russian men assumed they were the ones who had attacked their ship. Darkstar once more proved to be the voice of reason among the unnamed Soviet team 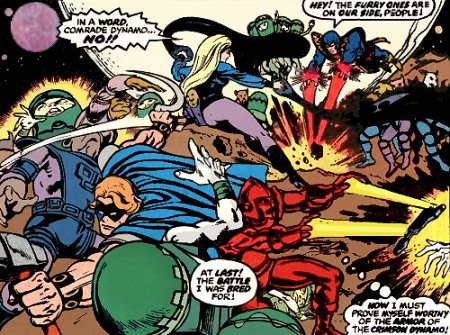 and calmed her teammates down, reminding them of the true threat they had all come to investigate. Despite Darkstar’s efforts to avoid an unnecessary conflict, Iron Man was angered to see her allied with the Crimson Dynamo, whom he mistakenly believed to be the man who murdered his lover, Janice Cord. A fight ensued but Laynia finally convinced Iron Man that this was not the same Crimson Dynamo, explaining that the armor was the property of the Soviet state and would be passed on to those deemed worthy. Joining forces, they discovered a mysterious dome to be the source of the energy signals. The dome housed an invading army of alien Rigellians, who were easily repelled by the combined might of the Russian and American heroes. [Iron Man (1st series) #109-112]

Due to their patriotism and dedication to their homeland, Darkstar and her teammates were often easily manipulated by the Soviet government. For instance, they were once approached by a disgruntled ex-general named Kutzov who falsely claimed that the United States was preparing to launch a nuclear attack on the Soviet Union. At Kutzov’s direction, Darkstar and her allies ventured to the United States and kidnapped Professor Ironwood and his daughter, Cissy. Spider-Man (who was romantically involved with Cissy) enlisted the Hulk to help rescue her from the Soviet team. During the conflict, Darkstar learned that there was no planned nuclear strike by the American government. While Spider-Man and the Hulk successfully stopped Kutzov’s plot to create an anti-matter bomb, Laynia was left with the knowledge that she had been used once more. [Marvel Team-Up Annual #2]

By the time that Darkstar’s old friend Major Mikhail Ursus aka Ursa Major joined the team, they were officially dubbed the Soviet Super Soldiers. Their new handler sent the group into the deadly Forbidden Zone, an area in Khystym where a nuclear accident took place. The radioactivity of the region was now growing thanks to the powers of a man known as Sergei aka the Presence and his companion, the Red Guardian. As soon as the Soviet Super Soldiers reached the Forbidden Zone, they encountered the Hulk. After trying to reason with the green giant, Darkstar used her Darkforce to restrain him but the Hulk was much stronger. As he broke free, Laynia was knocked unconscious. When she came around, Darkstar was pleasantly surprised to find her mentor, Professor Phobos, by her side. He convinced his former pupils and the Hulk that the Presence planned to mutate the entirety of Russia. When the Super-Soldiers attacked the Presence, Phobos used the distraction to seize a portion of the Presence’s power and finally revealed his true, evil nature. 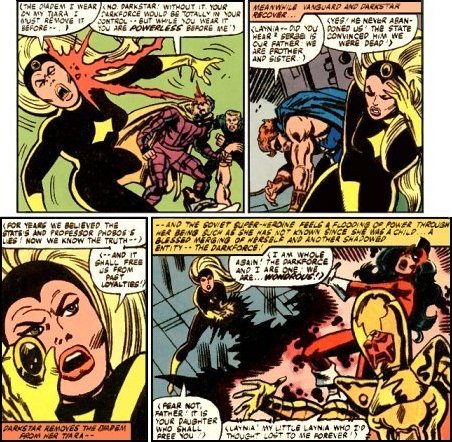 Now bordering on insane, Phobos revealed the twins’ true origin, namely that Vanguard and Darkstar were the Presence’s children. Realizing that the amulet Phobos gave her years ago had been diluting her power and feeding it to him, Laynia removed it from her costume and gained full control over the Darkforce. She joined Vanguard, Ursa Major, the Hulk, the Presence and Red Guardian in stopping Professor Phobos’ plan to mutate all of Russia’s people. This unexpected reunion with her father proved to be brief. He and Red Guardian had absorbed the excess radiation unleashed by Phobos and were forced to leave Earth to prevent contaminating anyone else. Devastated at losing her father when she had finally found him, Darkstar found solace in her brother’s arms and made a vow that the Super Soldiers would no longer blindly follow the Soviet State. [Incredible Hulk (2nd series) #258-259]

In the weeks that followed, Laynia’s disdain for her government continued to grow. Upon learning of a nuclear core threatening her homeland, Darkstar contacted the defected Russian mutant Colossus of the X-Men to aid her and the Super Soldiers in addressing this crisis. It turned out that the nuclear facility was actually another of the Soviet government’s attempts at creating super-beings to serve their interests. It was only with the X-Men’s help that a nuclear disaster was averted and the surviving mutants held there were liberated. Disgusted by how her fellow mutants had been abused, Darkstar vowed to bring the government officials responsible for this facility to justice. [Wolverine First Class #7-8] 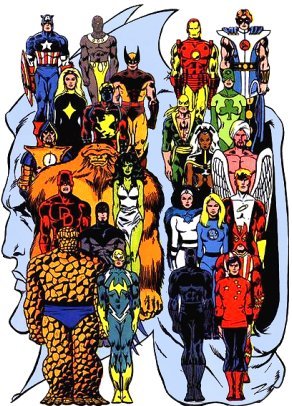 Following this, Darkstar and her teammates were summoned against their will, along with nearly every other super-hero on Earth, to take part in a contest of cosmic proportions. Laynia was briefly reunited with Iceman and told him that she had thought of him - often and fondly - since their time in the Champions. Darkstar was one of twelve heroes chosen by the Grandmaster to face off in a literal contest of champions against twelve heroes chosen by Death. Ironically, Death’s champions included Darkstar’s brother. The stakes in this contest were immeasurably high. Darkstar fought alongside Daredevil and the Aboriginal Australian known as Talisman against Sunfire, Iron Fist and the Invisible Girl. Darkstar’s team emerged victorious in this round of combat and ultimately, the Grandmaster's champions won the contest on his behalf. After he received his rewards from Death, Darkstar and the rest of Earth’s heroes were returned to Earth. [Contest of Champions (1st series) #1-3]

Darkstar was adamant that her team no longer serve the State after all their lies and deadly manipulations. However, her patriotism and that of her teammates would not allow them to abandon the people of Russia if they were imperiled. When the Soviet government claimed that the entire Soviet Union was threatened by the schemes of the genius scientist code-named the Gremlin, Laynia and the Super-Soldiers reluctantly agreed to track him down in Khystym, now called the Dead Zone. Darkstar and her fellow Super-Soldiers were unaware that the KGB agent who recruited them was truly an alien infiltrator from the shape-changing Dire Wraiths.

Once in the Dead Zone, Darkstar and her team came into conflict with Rom the Space Knight, his paramour Starshine and their Russian ally, the Gremlin, who had discovered the presence of Dire Wraiths in the Russian government. A battle erupted and Darkstar took on Rom’s companion, Starshine who wielded a powerful form of “living light”. As they battled, Laynia was overwhelmed and seemingly split in two. Her connection with the Darkforce manifested itself as a completely separate form composed of Darkforce energy. Laynia seemed fully aware of this dual aspect to her being and feared that she 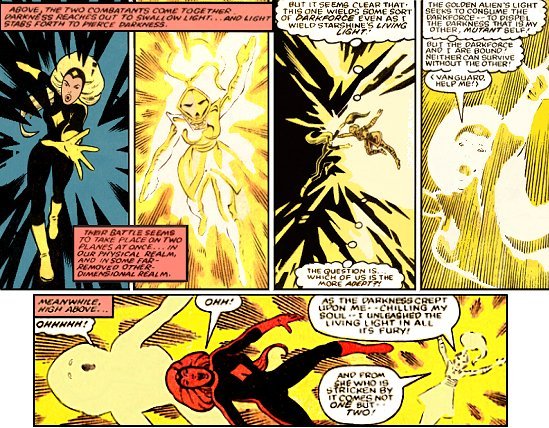 could not survive without it. Her Darkforce self was nearly consumed by Starshine’s “living light”, but Vanguard knocked Starshine unconscious before his sister was permanently harmed. After discovering the truth of the Dire Wraiths’ facility in the Dead Zone, the Super-Soldiers allied themselves with Rom and the others to vanquish the Wraiths. Afterwards, Darkstar invited the Gremlin to join the Soviet Super-Soldiers. The team remained in the Dead Zone and used the Wraiths’ complex as their new headquarters in their efforts to champion the people of Russia without governmental interference. [Rom #45-46]

While responding to a railway catastrophe, Darkstar and her fellow Super-Soldiers were approached by the Crimson Dynamo, who had remained loyal to the Soviet government. He informed his former teammates that the disaster had been caused by a fragment of Magneto’s asteroid base falling to Earth. Despite their differing allegiances, Darkstar and her team agreed to join the Crimson Dynamo in bringing Magneto to justice for his crimes against the Russian people, most notably the sinking of the submarine Leningrad and the destruction of the city of Varykino. Darkstar teleported her teammates to Magneto’s location - however, upon arriving in Kampuchea, they discovered that the Avengers had already apprehended Magneto on behalf of the World Court who intended to try him for his crimes against humanity. They also learned that Magneto was now a member of the X-Men, who were unwilling to see Magneto captured.

While Darkstar seemed content to allow the Avengers to deal with Magneto, her teammates were not willing to let the situation be controlled by foreigners. Naturally, a battle between the three super teams followed during which Magneto and the X-Men 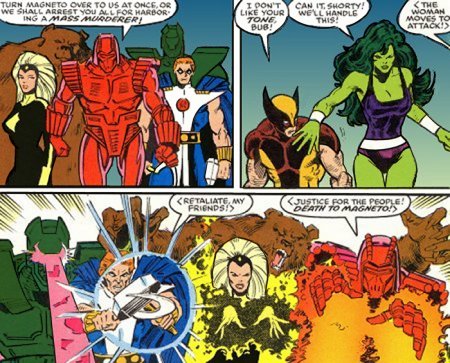 were able to escape. Before long, the Super-Soldiers tracked Magneto and the X-Men to a freighter they were attempting to escape in. Egged on by the Crimson Dynamo’s fervor, the Super-Soldiers engaged the X-Men resulting in the sinking of the freighter. The Avengers arrived in time to assist in the ship’s rescue and after aiding the assembled heroes, Darkstar proved instrumental in the capture of the Crimson Dynamo who was responsible for sinking the freighter. At that point, Darkstar pulled the Super Soldiers out of the situation and assured the two other teams that they would turn the Crimson Dynamo over to maritime authorities and allow the World Court to deal with Magneto. [X-Men vs. Avengers #1-3]

Shortly after this incident, Darkstar embarked on a diplomatic tour of the United States and was reunited with the Black Widow. Darkstar explained to the Widow that she remained loyal to Russia in order to make a positive change in her country from the inside. During their time together, they were attacked by Russia’s third prominent super-powered woman - the former Red Guardian, now known as Starlight. She was now completely under the Presence’s control, who had sent Starlight to retrieve Laynia and the Black Widow so that he could create a “harem” of Russian super-women. Laynia was deeply disturbed that her own father would desire her in this way and eventually brought Starlight to her senses using the Darkforce. Starlight explained that the Presence was mentally ill but assured Darkstar that she would help him recover his sanity and keep him under control. [Marvel Comics Presents (1st series) #70] 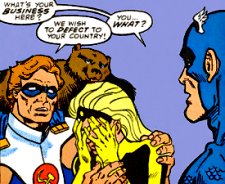 Upon returning to Russia, Darkstar and her remaining teammates were under constant pressure from the government to serve as sanctioned agents but they preferred to remain independent heroes. When the Soviet government sent their new team, the Supreme Soviets after the Super-Soldiers, they concluded that the best way to serve the people of Russia was to defect to the West. Laynia teleported herself, Ursa Major and Vanguard to Avengers Island, where they presented their plea for political asylum to Captain America. Cap listened to their story and offered them temporary sanctuary at Avengers Island while he contacted the US government to discuss the legalities of the matter. During Cap’s absence, Laynia and her teammates were attacked and gravely injured by the Supreme Soviets.

Lingering on the brink of death, the minds of the three Soviet Super-Soldiers were somehow linked and given form through Laynia’s connection to the Darkforce. Taking the form of a giant bear composed entirely of 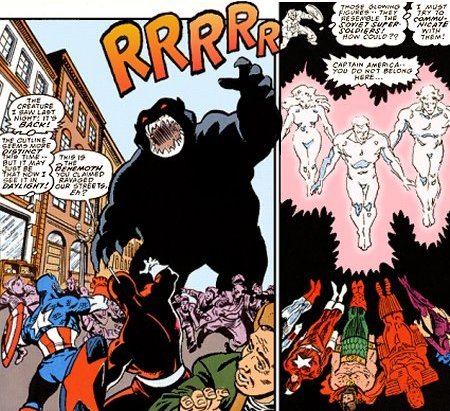