BIOGRAPHY - Page 4
When she called Harry Osgood in New York, Alison had to learn that he would not renew their contract, despite her success. He thought that being based in New York, he could not get her enough jobs and auditions, as LA is a lot more centered around the movie industry and most of his contacts are strictly music business. [Dazzler #31] 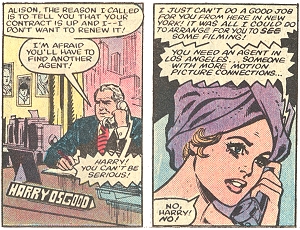 For Ali, this meant she had to start from scratch; new apartment, new auditions and castings and to earn a living as aerobic instructor and as a model. She got minor jobs in the media business. For example, once she got to perform in a music video “Chiller.“ The setting had various zombies crawl from their graves and dance but Dazzler’s grave was sabotaged and had no breathing hole. The director planned to have the scandal of a popular singer dying on the set boost the success of the song. However, the plan failed and Alison got out in time. [Dazzler #33] 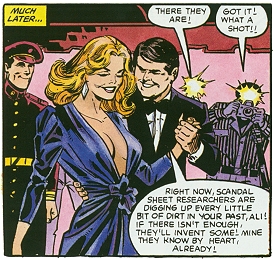 Nekobah kept calling Alison and sent her flowers until he finally managed to seduce her. He then tried to make her a star and had new clothes bought for her so that they could attend various promo appearances together. Soon, there were rumors about a movie starring both of them and then the project was actually decided. 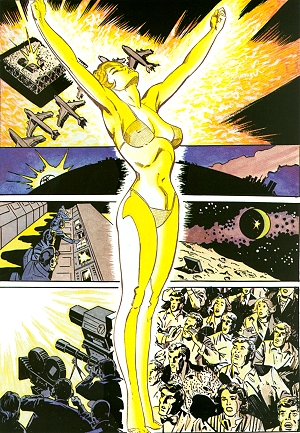 Alison was unaware that the movie was funded by Eric Beale, a man who had earlier tried to get her attention, but she had turned him down. Beale had figured out that she was a mutant and he given this knowledge to Nekobah, who decided to create more media hype of it. He deliberately leaked the knowledge to the press and had Ali demonstrate her power in public. Nekobah had invited the press to an airport, where Dazzler absorbed the sound of six 747 jets at full force and she started to glow. Yet, it was too loud and the people started to panic, so Alison strained herself really hard to take in all the noise and, suddenly, it was dead silent. Dazzler absorbed every little bit of sound from the jets and from the panicking crowd as well. She glowed so brightly that she was seen from as far away as the lunar surface. The publicity stunt backfired and anti-mutant hysteria rose. Afterwards, Ali discovered that the incident had changed her body. She was now able to store absorbed sound energy like a battery and could release it later. She no longer had to rely on her pocket radio or other sources of sound to create her light blasts. 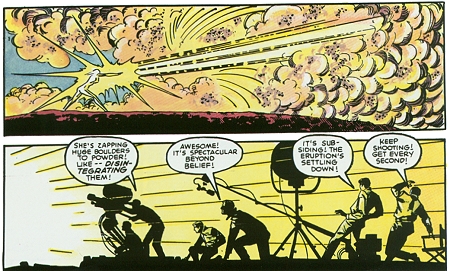 Her secret outed, Alison thought about not taking part in the movie. However, as it was supposed to portray mutants in a positive light, she felt that she had to do it. Finally, when the filming was done, Nekobah dropped her like a hot potato, as being seen with a mutant was ruining the remains of his career. 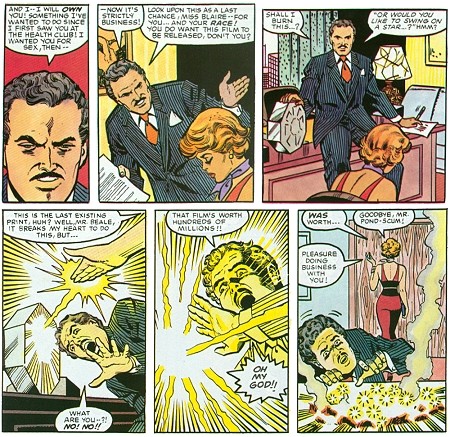 Dazzler was invited to Eric Beale’s office, who tried to blackmail her. He wanted to own Alison, body and soul, otherwise he wouldn’t release the movie. Thinking of the good it would do for mutantkind’s image, Dazzler hesitated but then burned the only copy of the film with her laser. [Marvel Graphic Novel #12 - Dazzler: The Movie]

Completely unemployable, as a performer or even in menial jobs, Dazzler was approached by Flynn, who was working for a mutant circus and gladiator show. They gave her a drug that made her slowly lose control 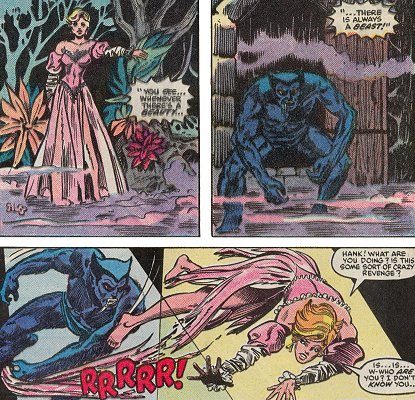 of her powers and Alison was even more an outcast than before. Ali found a new home at the Heartbreak Hotel, an asylum for misfit mutants, where she was found by the Beast and they fell in love with each other. However, when Flynn offered her the chance to perform again, she couldn’t resist. At first, she started to sing but the audience of the gladiator circus booed, so she joined the fights in the Arena. The Beast found out that she was drugged and made perform against her will, yet a rescue attempt failed and he was captured and drugged as well. The Gladiators then pitted them against each other in a duel of Beauty vs. Beast. During the fight, Alison nearly killed Beast, but then she remembered that they were in love and it broke the spell they were under. After Flynn, the theatre’s leader, was dealt with, the Gladiators promised to go straight and run the Circus themselves, without having to rely on drugs. [Beauty and the Beast #1-4]

Afterwards, Alison got lucky, as she was hired as a session singer by Lila Cheney. Neither women knew that the other was a mutant as well, until Lila’s boyfriend, Cannonball of the New Mutants, dropped by, asking for help. Two of his teammates, Sunspot and Magma, had been 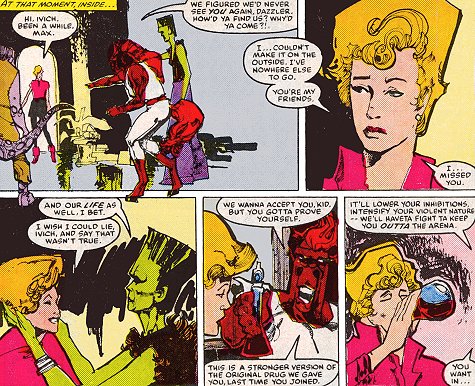 kidnapped by operatives of the Arena; there had been no change at all, the Gladiators still kidnapped and drugged young mutants to turn them into Gladiators as well. Dazzler opted to help Kitty Pryde, Rachel Summers and the New Mutants to rescue their friends – partially, though, because she needed to prove to herself that she wasn’t as addicted to fame and adrenalin as the Gladiators. Pretending to rejoin them, Dazzler had to perform in the Arena several times until she gathered enough information for the New Mutants to plan an attack. When she heard the cheers of the audience, Alison was tempted to stay with the Gladiators but ultimately chose not to, as the price of her soul was too high. She then, helped Xavier’s students to expose the true villain behind the Arena – the Shadow King. [New Mutants (1st series) #29-31]

After the incident, Dazzler decided that she wanted to help undo some of the recent anti-mutant hysteria by using her powers to help people. For that, though, she needed to get some training, as she was now a walking target for every mutant hater. For a few weeks, she trained with the X-Men at Xavier’s mansion and honed her skills. Cyclops, especially, helped her focus her laser beams. All but Wolverine were rather supportive of her, even though Dazzler didn’t want to join the X-Men as she wanted to make it on her

own. To convince Logan of her progress, she agreed to a special test. She would not know how or when, but the X-Men would attack her in a real-life situation. Eventually, while working as a singer in some shabby Las Vegas motel, Alison found herself hunted by Wolverine and Colossus. Dazzler outsmarted both of them in the fight and stopped short of killing Logan, proving to him and, more importantly, to herself that she was ready for the field. [Dazzler #38]