BIOGRAPHY - Page 8
Next, Gambit, Rogue and Danger returned to the X-Men, who had since relocated to San Francisco and were facing a wave of anti-mutant hysteria. There were riots all over town and Norman Osborn, newly appointed head of national security, used the situation to outlaw mutants. As the situation was dire, Cyclops welcomed Gambit back into the X-Men despite the circumstances under which he had left them for Apocalypse. [X-Men Legacy #225-227]

During the X-Men’s sudden move to the make-shift island nation of Utopia, a sovereign nation for mutants, Gambit’s earlier betrayal was entirely forgotten about. However, Remy himself could not forget, as he was soon reminded of Apocalypse’s changes to him. When Gambit was worried sick as Cyclops had sent Rogue on a rather risky mission without back-up, he lost his

temper. In the middle of his argument with the X-Men’s leader, though, Gambit rushed away, as his Death re-surfaced, triggering a physical change. Nobody witnessed the transformation and Gambit was able to change back to his regular self. Still, he was left wondering about the true nature of the Death persona inside of him. [X-Men Legacy #229-230]

Rogue made it back safely and kept her distance from Gambit over the next weeks. Eventually, she explained to him that it was due to her newfound control of her powers. She was still inexperienced in them and needed to remain focused, and Remy’s recklessness and care-free attitude was in direct opposition to that. Remy told Rogue that he understood; but maybe her decision not to resume the relationship was also relief for him given his current condition. [X-Men Legacy #234]

Shortly thereafter, the New Mutants’ Magik was abducted to Limbo. With the X-Men’s power-houses needed to fight off an attack of Nimrod and the Friends of Humanity, Cannonball assembled a make-shift team of new 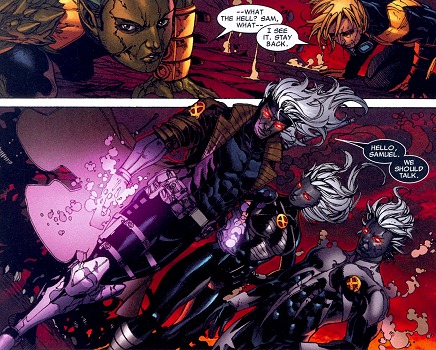 students and veteran X-Men alike, Gambit being the most experienced of the group. No sooner had they teleported to Limbo that the mutants found themselves under attack by dozens of demons. During the battle, Gambit became separated from the others, who called for his help, but he once again gave in to his inner darkness and transformed into Death. Even worse, when he threw his charged up cards at his teammates, Dazzler and Northstar were changed into corrupt, black-skinned and white-haired versions of themselves too. Luckily the other X-Men managed to rescue Magik and, when she and Pixie stabbed Gambit with their soul-blades, Gambit and the others reverted back to their normal selves. As the incident was written off to Limbo’s corruptive influence, it wasn’t given much thought by Gambit’s teammates. [X-Men: Hellbound #1-3]

One resident of Utopia, though, revealed herself to be aware of Gambit’s condition. When the blind precog, Blindfold, sensed imminent great danger for the X-Men, she at first believed the Death persona to be the cause of it. She outright asked Gambit whether he was about to harm the X-Men, triggering another transformation into Death, who denied having anything to do with what Blindfold had foreseen. As Blindfold left him alone, Gambit reasserted himself. [X-Men Legacy #244] Apparently, Blindfold hasn’t told anyone else of Gambit’s situation, as she usually remains to herself and prefers being rather cryptic about the future, since she believes there is no way to alter the course of history. 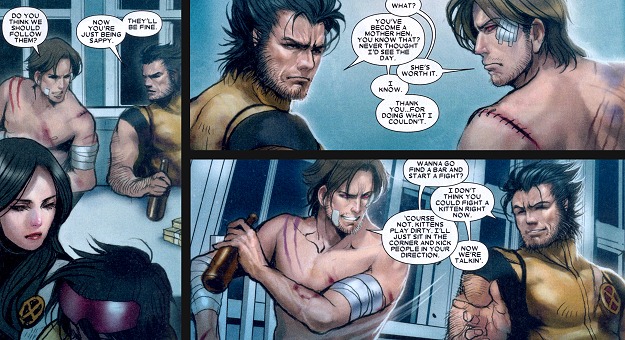 For a while, Gambit followed a request of Storm and kept a close eye on X-23, a female clone of Wolverine, who had been staying with the X-Men. Having served as a conditioned assassin for all of her young life, X-23 was a troubled soul who did not even fit in quite right with the mutants on Utopia. Remy earned himself Wolverine’s gratitude as he accompanied X-23 to the likes of Madripoor, Paris and New York in order to search for clues regarding her past. Eventually, though, he needed to recuperate from injuries received in battle and X-23 moved on without him. [X-23 (2nd series) #2-13]

Back on Utopia, Gambit confronted Rogue, telling her that he does not accept her explanation about not being with him due to her newfound control over her powers. As far as he is concerned, 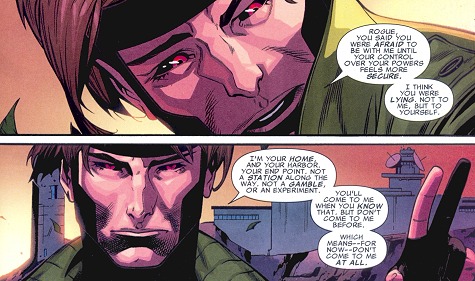 true love cannot be overruled by reason and he proclaimed his love as well as his intent to wait until she would be ready for such a commitment herself. Despite their unresolved relationship issues, Gambit joined a squad of X-Men team led by Rogue, also including Magneto and recently reformed Joanna Cargill, aka Frenzy, whom Remy supports as well as he can. [X-Men Legacy #248-250] It remains to be seen for how much longer Gambit can keep his Death persona in check and what his new teammates will think of him when it finally manifests for everyone to see.