In the Ultimate universe, Erik Lehnsherr was a good friend and ally to Charles Xavier and together they wanted to achieve a mutant utopia. However, things went terribly wrong as Magneto became suspicious of Xavier’s telepathy and disenchanted 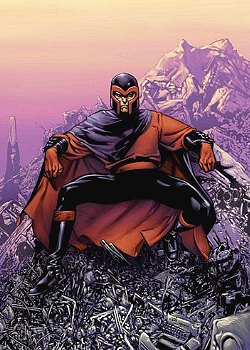 with his pacifist ideals and eventually Magneto crippled the fleeing Xavier. Later, Magneto created his Brotherhood based in the Savage Land. After a Sentinel attack on the Savage Land, Magneto reprogrammed them to destroy Washington. The X-Men stopped them and Xavier seemingly (and very publicly) killed Magneto. Actually, Xavier faked Magneto’s death and reprogrammed him to rehabilitate him, the amnesiac Magneto living as a social worker. However, due to the X-Men’s carelessness the Brotherhood members learned of Magneto still being alive and restored him to his former self. Magneto publicly “thanked” the X-Men, letting everybody know that they were responsible for his being still alive, before declaring war on humanity. While his Brotherhood to commit terrorist acts, Magneto planned with the help of an amplifier to reverse Earth’s magnetic poles, effectively obliterating every living being save those in his citadel. However, he was stopped by the X-Men and arrested. Magneto is held securely in a cell made of plastic, or actually, that’s what everyone thinks, as at one point the shapeshifter Mystique traded places with him. Magneto is still at large and plotting his next scheme... 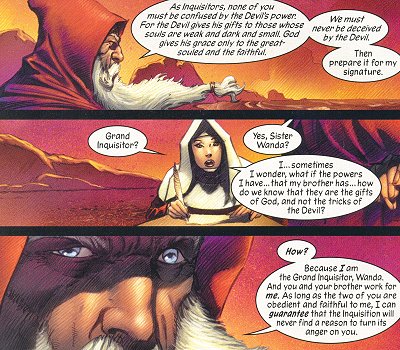 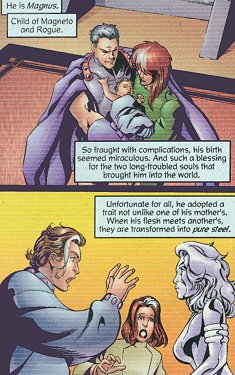 On Earth #27, Magneto found true happiness with Rogue and through great difficulty they had a son who they named Magnus, apparently after his father. Young Magnus had inherited his father’s magnetic powers, only he could control these gifts even better than he. Unfortunately for the lad, he also inherited a power similar to Rogue’s. When Magnus touched another person’s bare flesh, they would immediately turn into steel. As a result, Magnus grew to be a distant, reclusive man, who would always carry the knowledge he could kill with a single touch. Magnus created a protective suit, which covered his entire body except for his face. At some point in his life, Magnus became “unhinged from time” and was drafted into the reality-hopping team called the Exiles. This ragtag group of mutants was charged with traveling from one dimension to the next repairing damage done to the proper timeline in each. On the Exiles’ first mission, they made a grave error and Magnus had to sacrifice his own life to prevent an A-bomb from destroying the world they were on.
------------------------------------------------------------
In one of the many realities visited by the dimension-hopping team known as Weapon X in Exiles #23-25, Tony Stark forged a clandestine alliance with Magneto to create for himself an Iron Monarchy. 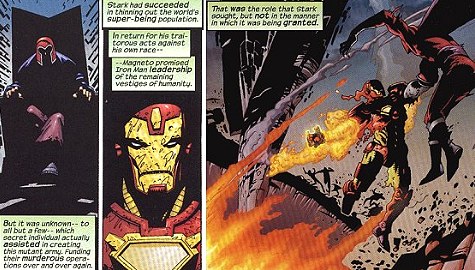 Magneto received funding and resources from Stark to instigate the Mutant War. Stark promised that Magnus could rule the world, leaving him as the leader of humanity’s remains. In the course of the conflict, the superhuman population was significantly thinned out, just as Stark had planned. Ultimately, Iron Man betrayed Magneto and killed him on camera, instantly becoming a hero to the masses and securing his place as the world’s new monarch.
------------------------------------------------------------
Another timeline provides the answer to the question What if Magneto and Professor X had formed the X-Men together? In Israel, after fighting Baron von Strucker, Magneto did not leave, as Gabrielle Haller convinced him that violence and vengeance were the wrong way. 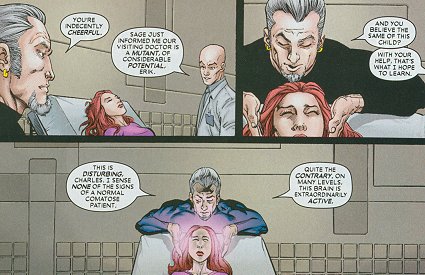 Being a Nazi victim herself, she was able to reach Magneto where Xavier couldn’t. The two men chose to work together and, over the years they consulted politicians and scientists, achieving much on the global front bringing peace in the Middle East just as an example. Magneto eventually married Gaby Haller. Gathering mutants was never a priority for Magnus and Xavier, though, so none of them developed anything like Cerebro and those few mutants they found like Kitty Pryde or Sage they more found by accident. When a comatose Jean Grey was brought to them for help, they were also attacked by Larry Trask’s Sentinels and a team of X-Men - including Magneto - was formed.
------------------------------------------------------------
On yet another divergent Earth, depicted in Exiles #38-40, Magneto and his Brotherhood left Earth as humanity waged a war on mutantkind using powerful Sentinels. His plan was simple: 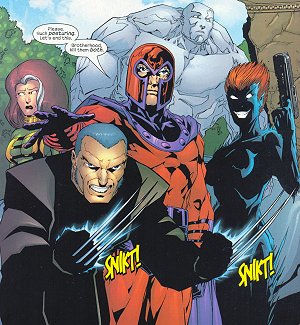 allow humanity to destroy those mutants who had refused to join him and sought to protect a humanity that hated them. Once most of Earth’s mutants had been killed in the Sentinel war, Magneto would initiate his own war on humanity. His plans were disrupted by the arrival of the dimension-hopping team known as Weapon X. Their leader, Hyperion, reveled in their mission to destroy this world’s remaining mutants. But he also saw an opportunity to escape the servitude of Weapon X’s master, the Timebroker, by remaining in this reality and setting himself up as King Hyperion. Magneto’s plan involved to destroy the Earth by crashing Asteroid M into it. Afterwards, he wanted to He then planned to lead his mutant followers into space, to conquer a new planet for them. Sensing the mutant members of Weapon X, Magneto invited them to join him before Earth was destroyed. This brought him into direct conflict with Hyperion, who sought to rule this Earth. When Magneto refused to halt the deadly descent of Asteroid M, Hyperion killed him and most of his followers as well.
------------------------------------------------------------
The revamped Weapon X program building Sentinels to round up mutants and herd them in concentration camps created a future scenario 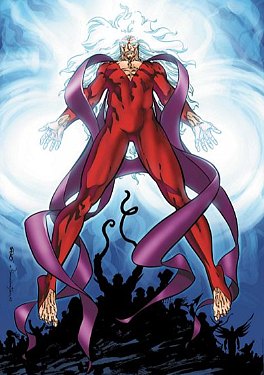 not unlike the Days of Future Past. About 24 years in the future, Wolverine tried to organize the mutants, both heroes and villains, into working together. In this reality, Magneto had spent several years in outer space, but he also accepted Logan’s invitation and joined the other mutants. Together with Wolverine and Warbird, Magneto traveled to the Blue Area of the Moon, where they enroll the aid of the Avengers and the Fantastic Four in their never-ending battle against the Sentinels. Putting their differences aside and trusting Magneto, the heroes all ended up being massacred. Wolverine realized the truth: Magneto had tipped off Weapon X about their gathered strength and battle plans, resulting in the deaths of the Avengers and the Fantastic Four, so that humanity would finally see in the error of building more Sentinels and shut them down. Logan wanted to kill Magneto for this, but the master of magnetism managed to calm the feral X-Man down by reminding him that he would be much more useful to their cause alive.
------------------------------------------------------------
Ten to fifteen years in the future, the X-Men met their End when several of their opponents banded together and attacked them 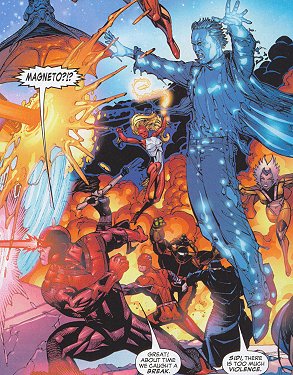 simultaneously on various fronts and from all sides. Having stayed in Genosha for years to rebuild the island and its society, Magneto and Xavier were unable to help the X-Men when the mansion was destroyed, though they joined the survivor afterwards. When it was discovered that Cassandra Nova, the mastermind behind the attacks, was residing in Shi’ar space, Polaris and Magneto used their powers in combination to create a wormhole big enough to transport the assembled X-Men and their allies to Chandilar. However, one of the Shi’ar Imperial Guard attacked right then, absorbing the life-forces of father and daughter causing an energy feedback. Keeping himself alive by sheer force of will and tapping into the Chandilar’s magnetic field, Magneto became a being of pure energy and helped the X-Men in their battle against the Imperial Guard. However, he wasn’t a match against Cassandra Nova possessing Xavier’s body. It took Phoenix’s intervention as they all - including Magneto recreated the “Tree of Life” from the Quabala and presumably transcended this plane of existence.
------------------------------------------------------------
The divergent reality designated Earth 2149 was radically altered by the introduction of a contagion that transformed its victims into zombie-like creatures. Magneto learned of the alien virus and willingly allowed it to infect the populace, thinking that it would thin out humanity’s ranks and give mutantkind a much needed advantage. He was surprised when it infected mutants as well. 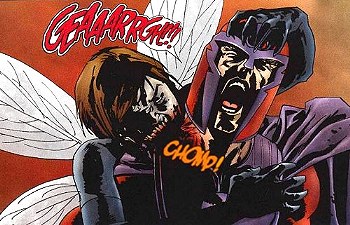 Many of Earth’s superhumans were transformed and only a handful remained. The infection spread rapidly and Magneto believed he was the last uninfected superhuman left on Earth. He joined a small band of uninfected humans and helped to protect them. While hiding in the subways, Magneto encountered a dimension-hopping Fantastic Four, who he helped to escape the zombies and return to their own timeline. He sent his human allies with them and remained behind to destroy the machines they used to teleport away so that the Infected could not follow. Magneto had plans to retreat to his Asteroid M but was attacked by a team of superhuman zombies. Magnus managed to defeat a number of them before he was surprised by the diminutive Wasp. She grew to full-size and bit him, infecting him with the virus as well.
------------------------------------------------------------
Alternate realities can vary greatly and in one of them, depicted in Exiles #85-86, Magneto was a woman. This Magneto had given birth to twins who were also the opposite gender of Wanda and Pietro. Quicksilver and the Scarlet Warlock were members of the female Magneto’s Brotherhood which sought to rule the world. One of Magneto’s schemes involved using her son, Scarlet Warlock’s, powers to transfer Wolverine’s adamantium skeleton into Magneto’s body. However, something went 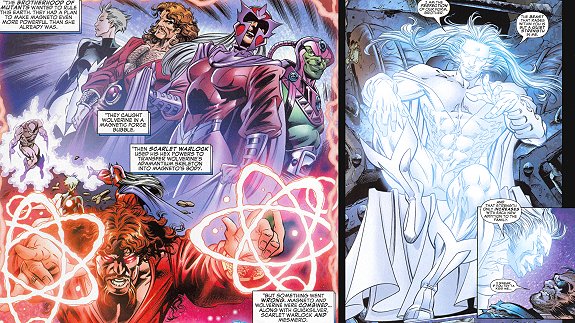 wrong and the hex did much, much more. Rather than simply steal Wolverine’s metal skeleton, the hex merged Magneto and Wolverine along with the rest of the Brotherhood: Mesmero, Quicksilver and the Scarlet Warlock himself. The result was Brother Mutant, an amalgamation of all five mutants. Brother Mutant was never supposed to exist and his/her presence caused a temporal disruption that caught the attention of the Timebreakers, who eventually sent the Exiles to defeat and kill the near-omnipotent amalgamation.