BIOGRAPHY - Page 3
The horrors Rachel went through in the Mojoverse are unknown but, after long months, she managed to escape from the dimension and emerged back on Earth, in London. Rachel pondered returning to the X-Men and asking for forgiveness, when she was suddenly attacked by both a team of Warwolves, trying to get her back to the Mojoverse, and Gatecrasher’s Technet, 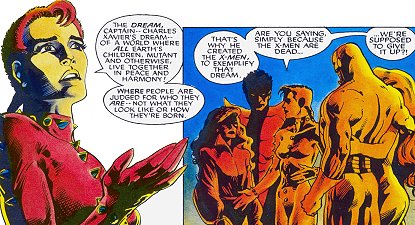 acting on the command of the Omniversal Majestrix, Opal Luna Saturnyne, as she considered Phoenix a threat to all reality. Only because of the timely interference of Nightcrawler, Shadowcat, Meggan and Captain Britain, Rachel could escape capture. Her former teammates from the X-Men welcomed Rachel with open arms and informed her that, during the time she had been absent, the X-Men had died in the line of duty, leaving them as the sole survivors of Xavier’s dream. Hearing all this, Rachel inspired the formation of Excalibur. [Excalibur: The Sword is Drawn] The five heroes then moved into Brain Braddock’s lighthouse at the Atlantic Coast, which became their base of operation.

At one point, Mastermind, the villain who caused the original Phoenix so much trouble, tried to get ahold of the Phoenix Force once more by creating an illusionary world for Rachel 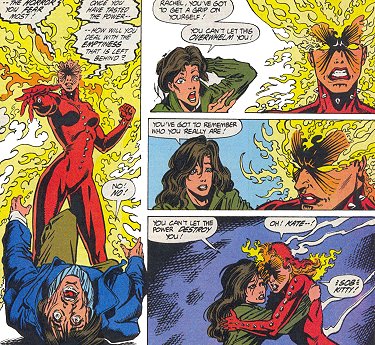 where she was still in her own future timeline, happily united with Franklin. Kitty dressed up as the future Kate to snapped Rachel out of it, whereas Meggan shapeshifted into the Black Queen - the persona that Mastermind had created for Phoenix - to draw the villain to reveal himself. When she finally realized who “Franklin” really was, Rachel was about to show no mercy and wanted to punish the villain in ways he could not even conceive. Kitty, however, convinced Rachel to get a grip on the situation and Mastermind was released into official custody. To make sure that he wouldn’t break out of prison and come after her again, Rachel planted the illusion in Mastermind’s head that he had won the fight and that his mind was now one with the universe. [Excalibur (1st series) #26]

A few weeks later, New York City was invaded by demons from Limbo. Madelyne Pryor had been lured over to the dark side and, as the Goblin Queen, she intended to 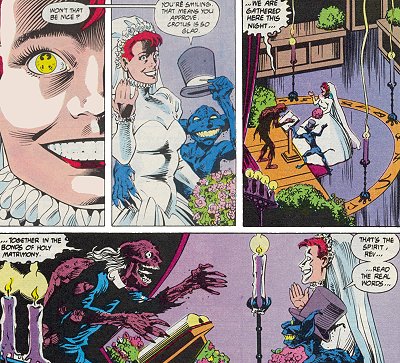 sacrifice her son to stabilize her power base during this Inferno. Rachel picked up a mental distress call from her baby brother and immediately set out for New York, but she was taken by surprise when the Goblyn Queen struck her out of the sky. Rachel dropped down in front of a bridal shop and, barely conscious, she noticed too late that, because of the magic energies, even inanimate things posed a threat. One of the mannequins in the shop’s traded places with her, leaving Rachel trapped and unable to move. Crotus, a lesser demon, took advantage of the situation and planed to access the Phoenix Force he sensed within her through a forced wedding with the immovable Rachel - after all, she was already wearing a wedding gown. Fortunately, Nightcrawler saved her in time before the ceremony had been fully completed. [Excalibur (1st series) #6-7]

In the meantime, Nathan Christopher had been saved from his mad mother by the efforts of X-Factor, and Rachel discovered that not only 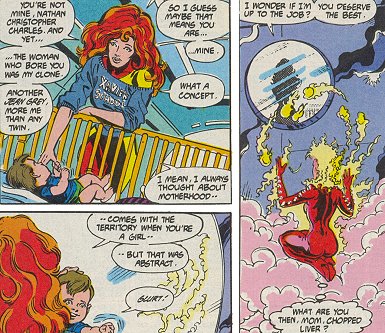 Cyclops was one of their members but that Jean Grey was also among them. The woman who had died years ago had not been Jean herself, but a duplicate of her that had been created by the Phoenix Force which Rachel now hosted. Rachel would learn of these details only much later, and she couldn’t care less, being quite happy that her “mother” was alive. Spying on her and little Christopher aboard X-Factor’s ship, Rachel decided not to reveal herself to Jean yet, as she still had to come to terms with her own situation. [Excalibur (1st series) #8]

Returning to Great Britain, Excalibur became allies with the Weird Happenings Organization, and particularly their top scientist, Alistaire Stuart. Professor Stuart had eyes only for Rachel, and wasn't very good at hiding his thoughts from her. Still, Rachel never truly acknowledged his intentions towards her, probably because of her roommate, Kitty Pryde, who had developed her own crush on Alistaire. After encountering a Nazi version of Excalibur called the Lightning Squad, the team began a haphazard trip through the 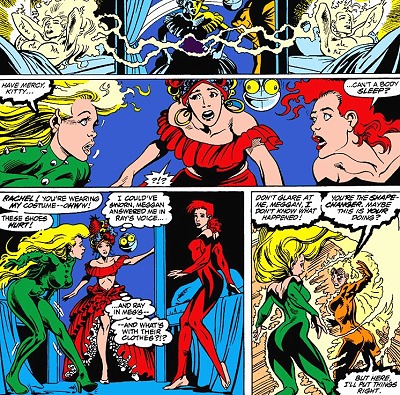 multiverse due to the Phoenix Force interacting with a mysteriously animated heap of scrap known as Widget, whose dimensional gateway powers sent them bouncing around uncontrollably through various parallel worlds. [Excalibur (1st series) #10-14, 25]

During their journey, Rachel and Meggan were "merging" various times. Accidentally, Meggan's empathic ability to shapeshift interacted with Rachel's telepathy, causing some confusion among the team. The two women would speak in each others' voice, spontaneously exchange clothing and physical features, and so on. [Excalibur (1st series) #9, 15, 18]

As their travels continued, Rachel found herself on a world that could not sustain her powers, leaving her a normal human being for the first time since childhood. With no way to continue traveling without the Phoenix Force to energize Widget, the team consigned themselves to an extended stay on the planet. Rachel took off on her own for awhile, and forged a relationship with that Earth's version of Jean Grey. Unfortunately, that relationship ended in tragedy when a pack of Slavers assaulted them, and Jean Grey was killed. Rachel fought back with nothing but her physical training, and learned that the

Slavers had placed an agent in the hero's tournament Excalibur was holding to find a champion that would look after the world in their absence. Adopting a masked costume, Rachel entered the tournament herself and routed out the betrayer, but not before his treachery had left most of her friends near death. Meggan, having tapped into the dormant life-energy of the planet, offered Rachel the chance to save their friends by force-feeding her massive amounts of energy to rekindle the Phoenix Force. She accepted, Excalibur survived and the happy wanderers continued about their travels. [Excalibur (1st series) #16-17]

During their many adventures, Excalibur was faced with the fact that, of all the various incarnations of Excalibur, none had a counterpart of Phoenix III. This might be explained by the fact that there is only one Phoenix Force in the entire multiverse, as it is the sum and substance of all that lives. Eventually, the disturbances they were causing throughout the multiverse caught Saturnyne's attention, and she summoned Excalibur directly to Otherworld to put an end to Widget's dimension-hopping. Fearing that Saturnyne was still after Phoenix as the Technet had claimed, Excalibur dressed Phoenix up in a thinly-veiled Shadowcat wig and costume to hide her in plain sight. Despite obviously seeing through the ruse, Saturnyne allowed Phoenix and Excalibur to leave unmolested, making the team suspicious as to why she had hired the Technet in the first place. [Excalibur (1st series) #24] Some months later, Excalibur would learn that Saturnyne had never intended to capture Phoenix, but only used the Technet as pawns to instigate the formation of Excalibur, at the behest of Roma.

Upon their return, the team faced someone else who considered Phoenix a threat to the universe. Galactus was waiting for them, and Rachel willingly agreed to let him take all of her energies, bargaining for Earth’s survival. Yet Galactus had to let her go, since as soon as he tried to drain her, the universe itself began dying. Her being the living embodiment of the Phoenix Force, Rachel’s was inseparably linked to one of the primal forces of the universe. [Excalibur (1st series) #25]

All of a sudden, an adult Franklin Richards appeared in New York - this time for real. He was the mental self of the Franklin 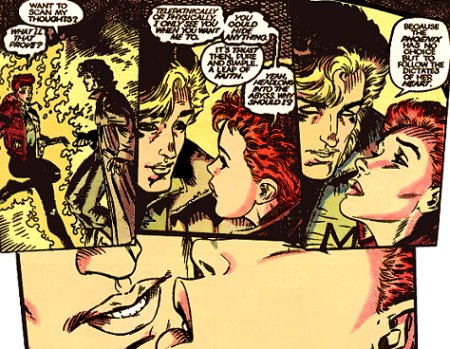 who had died in Rachel’s timeline, who, in the instant of his death, wished himself to a happier time where he felt safe. Disoriented and confused, Franklin altered reality as he saw fit, subconsciously tapping both into the powers of his younger self as well as Rachel’s. Despite being on the other side of the Atlantic Ocean, Rachel sensed her power being drained and rushed to New York. At first she and Franklin fought, barely recognizing each other as they had changed too much.

Franklin had been tracked and followed across realities by Ahab and his hounds, and it took the combined might of X-Factor, the Fantastic Four, the X-Men and the New Mutants to defeat the future hunter. He returned to the future but now he knew that Rachel was still alive, like he had always suspected. 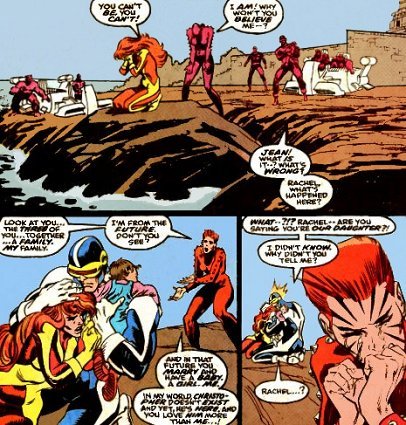 After Ahab’s departure, Franklin realized that he needed to accept his death or otherwise he would have permanently injured Rachel and young Franklin, by drawing from their abilities.

During the incident, Rachel also could no longer hide from Cyclops and Jean that she was their alternate future daughter. While she hoped for Jean’s love and support, Rachel did not find it. Feeling that her entire life was pre-ordained, Jean had difficulties to accept the existence a future daughter and turned away from Rachel, who took off and returned to her friends. [X-Factor Annual #5, Uncanny X-Men Annual #14]