Not much is known about the family and early life of Christoph Nord. Born in Hamburg, Germany probably around the late 1930's, Christoph had a brother named Andreas and his best friend growing up was Jean-Luc Vivant, who saved his life at some point. Nord would have been only a young child during World War II, but there have been suggestions that his parents were allied with the Nazis during that time, and were assassinated for their actions. So far as Maverick knew, though, they had no such connections and their deaths were an accident. Since this revelation came during combat with a personal foe, its accuracy must remain in question. [Maverick #2, 9] 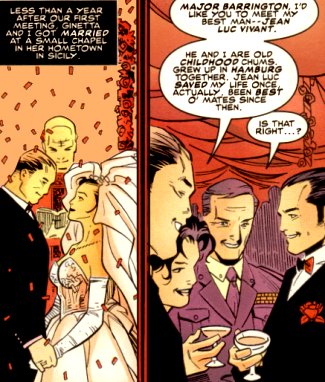 What is known is that Andreas Nord developed Neo-Nazi tendencies, and became estranged from his brother in early adulthood or sooner. [Maverick #9] As he came of age, Christoph became involved in an underground movement of West German freedom fighters, working against the Russian occupation in the East. His personal unit was a strike team known as Cell Six. On one failed mission in Italy, Nord was tossed off a roof by a Soviet assassin called the Confessor, and was left recuperating in a hospital bed for six months. His stay wasn't too tragic, however, since he met and fell in love with a young volunteer named Ginetta Lucia Barsalini. Theirs was a whirlwind romance, and they were married in Sicily less than a year after meeting. Among the attendees were Christoph's best man, Jean-Luc, and the U.S. Army Major Arthur Frederick Barrington, whom he had met during his work with the underground. [Maverick #2]

After a few years together, though, it became clear that Ginetta was a deep cover agent, feeding information back to the Russians about Nord and the West German underground. How exactly he found out about this is unclear, but apparently it happened during an incident where all of Cell Six was murdered, save Nord. Christoph returned home a vengeful man and confronted his blushing bride, only to have her cruelly taunt him with how easy he was to manipulate. He was forced to shoot her as she came at him with a knife, only to hear with her dying words that by killing her he had killed their unborn child as well. [Maverick #2]

Nord retreated into his work, taking more and more assignments as a freedom fighter, and hardening his soul against anyone else hurting him. He was re-contacted by Barrington, who was now working with the Central Intelligence Agency, and offered a place in a covert ops unit designated Team X. He accepted, and relocated to America under the new identity of David North, beginning his working relationship with the likes of Logan, Creed and Wraith. [Maverick #2] 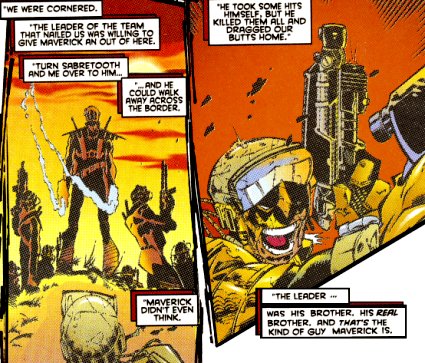 A hard man to befriend, North still had an overwhelming sense of camaraderie for his fellow soldiers. When Logan and Creed were severely injured by shrapnel during an excursion into East Germany, North refused to leave them behind and dragged them for miles to get back into friendly territory. When confronted by a group of East German operatives, led by his own brother Andreas Nord, North was offered the chance to go free if he would just leave Logan and Creed to their fates. David North instead gave no quarter, and killed his own brother and all his soldiers instead of giving up two of his own. [X-Men Unlimited (1st series) #15]

During one mission behind the Iron Curtain, North and his comrades were to extract a deep cover operative named Janice Hollenbeck, along with a mysterious but valuable canister containing a "Carbonadium Synthesizer." The mission went south fast when the Soviet Super-Soldier program activated their first test subject early. What was supposed to be a covert extraction turned into a firefight with a bio-engineered super-mutant named Arkady, or Omega 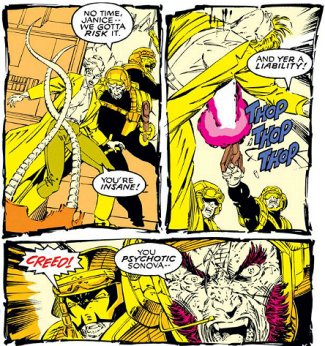 Red. The cybernetic Carbonadium tendrils implanted in Omega Red's body were unstable and radioactive, and Arkady needed to administer the C-Synth to stabilize the tendrils before they ate away at him from within. During their escape, Team X found themselves caught between Omega Red and a ten story drop to the ground below. Creed murdered Janine as a "liability" and shoved the rest of them out the window. A combination of kinetic energy absorption and healing factors kept everyone alive. As North, Creed and Logan made their escape with the help of their expediter, John Wraith, Logan "lost" the C-Synth by hiding it in Janine's dead body, ensuring that no one made out on this foul up of a mission. Sources have pointed to this as the breaking point for Team X, and the team soon went their separate ways. [X-Men (2nd series) #5-7]

At some point following his time with Team X, North was abducted by the Weapon X Program and experimented on. They gave him a series of false memory implants and blocked other memories from his mind, while also outfitting him with an age-suppression factor cultivated from Logan's healing powers. [Wolverine (2nd series) #62-63, Weapon X (2nd series) #23] As North began operating on his own as a freelance agent, codenamed "Maverick," he was contacted by Major Barrington, who helped Maverick straighten out his altered memories, and provided him with steady work. Maverick became Barrington's personal "troubleshooter," carrying out assignments for the major personally, or being loaned out to various other agencies or powerful figures in America, Germany and elsewhere. Somewhere around this time, North's mutant power shut down on him, and would remain dormant for years to come. He also made first contact with Isabel Ferguson, a renowned technologist and supplier for the intelligence community. After he saved her father's life, Isabel offered North a lifetime discount on her services, and was even the designer of his personal combat armor. [Maverick #1] 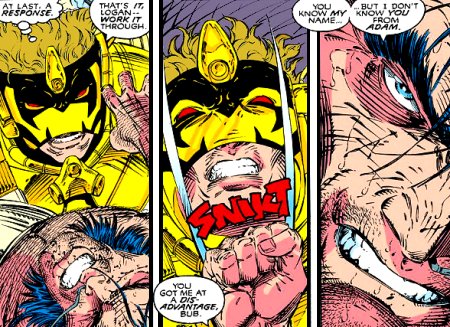 Decades after their last encounter, Maverick reconnected with his old comrades Logan and Creed when the threat of Omega Red resurfaced. An alliance of Fenris and Matsu'o Tsurayaba's Hand recovered Arkady from Russian custody and brought him out of suspended animation to hunt Wolverine on their behalf. The villains sought the Carbonadium Synthesizer which North, Logan and Creed stole over thirty years ago during their encounter with Omega Red, and captured Wolverine in order to wring the location of the C-synth out of him. Major Barrington sent Maverick in covertly to monitor the situation. Once it became clear that Logan's Swiss-cheesed memory wasn't going to immediately provide answers, North engineered his escape from the complex and whisked him away to his hidden monitoring camp from under Omega Red's nose. [X-Men (2nd series) #5]

As he played nursemaid to Logan and his overtaxed healing factor, Maverick was able to confirm for himself that his old drinking buddy had absolutely no memory of their history together. He was taking Logan away for a new round of interrogations about the C-Synth (this time by Barrington), when things got even more complicated. Logan's X-Men teammates arrived to save him (only to get themselves captured in the process), and the Hand summoned Sabretooth to help them hunt down the missing Wolverine. A lot of running around and many dead ninjas later, Maverick and Wolverine freed the X-Men and they all escaped, while their opponents limped away empty-handed. 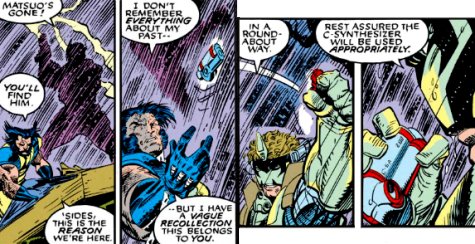 Logan successfully recalled the location of the C-Synth thanks to his captor's torture sessions, and beat them to Janice's grave to retrieve the capsule. His memory still foggy on a lot of the details, Wolverine decided it would be best to hand the synthesizer over to Maverick and the major for safe-keeping. [X-Men (2nd series) #6-7]

Maverick was next seen on an execution mission for Barrington. The crazed mutant named Hazard sent a top secret file to Charles Xavier, detailing their fathers' involvement in certain mutant initiatives by the government, including a possible connection to Weapon X and the Shiva Scenario plaguing Wolverine at that time. Hazard's father, Alexander Ryking, was a scientist in Barrington's employ, and the major wanted answers on how that information made it into Xavier's hands. Ryking stonewalled, possibly to protect his son, and hid himself away on a private isle. Maverick hunted him down, fighting his way through armed guards and the mercenary named Warhawk in order to get some answers. After determining that Ryking truly had no knowledge of the file's disappearance, North still went ahead and sanctioned the old man for Barrington, removing the potential for further leaks from Ryking. [X-Men (2nd series) #10-11] 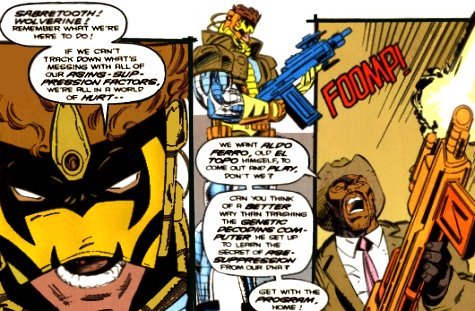 In order to prevent more information from being uncovered about Weapon X, Barrington assigned Maverick to bodyguard Aldo Ferro. Also known as Psi-Borg, Ferro was a major crime figure who once sold his psi-talents to Weapon X in order to aid in their memory implantation efforts. In other words, he was one of the few men alive capable of identifying all the false memories Wolverine and Sabretooth were carrying around. Maverick ended up on the wrong side facing down his surviving teammates from Team X, including Logan, Creed, Silver Fox and John Wraith, until Ferro turned his agonizing psi-powers on Maverick too. This once again scrambled North's memories, leaving him as uncertain of his own recollections as his comrades had become. After that, Maverick agreed to help his lost friends in recovering their pasts from the Psi-Borg. Unfortunately, Ferro was all mind games and empty implication, and the only lasting effect of the conflict was that Silver Fox was once again killed by Sabretooth, for real this time. [Wolverine (2nd series) #63-64]

Not long after that, Creed was going completely 'round the bend after his telepathic aide Birdy was killed and was no longer around to provide him with a psychic balm for his bloodlust. Maverick tried hunting Sabretooth down on his own, but only succeeded in getting a new set of scars in the process. He broke into the Xavier mansion in an attempt to extract Wolverine for back-up, only to be told that Logan wasn't in residence anymore. Facing little choice, North took the rest of the X-Men up on their offer for assistance. After a series of confrontations across Germany, Switzerland and Japan, Maverick and the X-Men finally wound up right back at the mansion, where Professor Xavier himself brought down Sabretooth. Xavier offered Creed a place at the mansion as a prisoner while he underwent psychic therapy for his bloodlust. [X-Men Unlimited (1st series) #3] 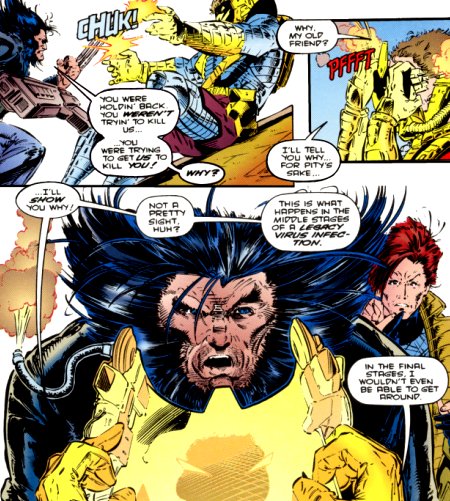 Not long after leaving Sabretooth in Xavier's care, Maverick learned that he was suffering from the Legacy Virus, the fatal infliction released among mutantkind by the future terrorist Stryfe. This was particularly hard for Maverick to accept since his mutant power had burnt out on him years ago. Yet here he was - afflicted with a mutant-only problem. Furthermore, he was a soldier, and to die anywhere other than in battle was an anathema to him. Maverick forced a confrontation with Logan hoping to be sent to the afterlife by his friend and not suffer through a lingering demise. Wolverine talked him out of suicide (assisted or otherwise), and North agreed to fight and to live as best he could. [Wolverine (2nd series) #87]