BIOGRAPHY - Page 4
Meggan felt somewhat alone after Brian left and eventually found comfort in another man’s arms. It started out rather harmlessly, with Meggan asking Colossus to draw a painting of her, intending the portrait to be a wedding gift to Brian. The two became quite close during the process. For Meggan, the artistic Russian provided a shoulder to cry on, 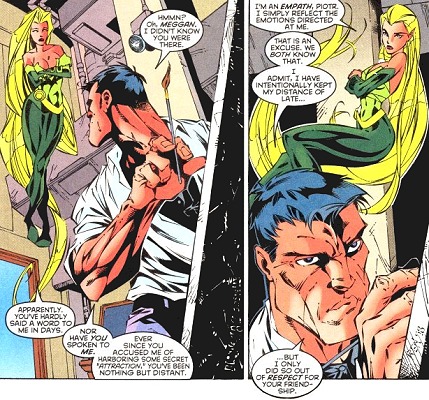 When Meggan sensed the growing romantic tension between them, she quickly withdrew and accused Colossus of abusing their friendship for his own personal gain. As it turned out, his feelings for her were merely platonic in nature. It was Meggan who felt an attraction and due to her feelings of guilt, she had projected her own emotions on Colossus. [Excalibur (1st series) #115, 118, 120] 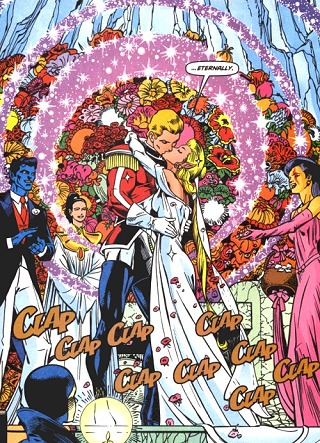 In the weeks that followed, Meggan yearned for Brian to return and each day she would sit by the docks of Muir Island hopefully waiting for the incoming ships. Brian finally returned, still powerless, but Meggan did not care. She was just happy to have him back. This time the couple didn’t want to waste time with lengthy preparations, so they announced their wedding for the very next week. During her bacholerette party, Meggan realized that there was no way she could be happy with Brian if she kept the attraction she had felt for Piotr a secret from her husband-to-be. So, she told Brian and he forgave her. In fact, he told her he was to blame as well for leaving her alone and locking her out of his personal problems. With these issues resolved, Brian and Meggan were married by Roma on Otherworld with dozens of friends and allies attending their wedding. Following the nuptials, the other mainstay members of Excalibur decided to return to the X-Men and the team officially disbanded during the festivities. [Excalibur (1st series) #123-125]

After honeymooning, Brian Braddock returned to his scientific work at the Darkmoor power plant, with Meggan and the Black Knight helping him with his experiments. During a visit from Psylocke, the heroes were alerted to a disaster on Otherworld. Apparently, Roma had gone mad and killed almost the entire Captain Britain Corps. Naturally, the group journeyed to the other-dimensional realm, where Brian soon regained his powers. The group quickly uncovered and defeated the true villain behind the attack on Otherworld. In the aftermath of this fight, Roma stepped down as Omniversal Guardian, explaining that her time 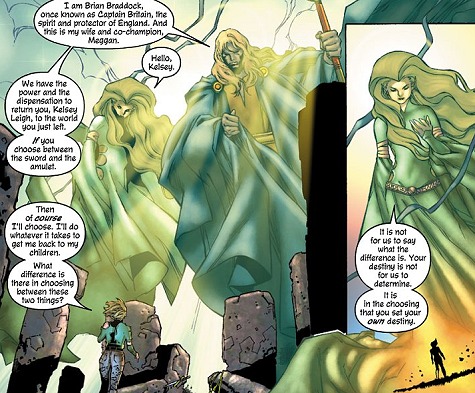 was up and she had to go elsewhere. She named Brian King of Otherworld in her place and Meggan stayed at her lover’s side, helping him rebuild the Captain Britain Corps. In Kelsey Leigh, they soon found a fitting, albeit unwilling, candidate to take over the mantle of Captain Britain in Brian's absence. [Excalibur (2nd series) #1-4, Avengers (3rd series) #80]

Several months later, Brian and Meggan briefly returned to Earth to bury Brian’s sister Betsy, who had been killed by a new enemy, Vargas. [X-Treme X-Men #3] A short time later, the X-Men believed they had met Brian and Meggan at Braddock Manor. However, in truth, these had been only illusions created by Jamie Braddock, Brian’s crazed brother who had awakened and was up to mischief again. [Uncanny X-Men #448] Jamie was also responsible for resurrecting Psylocke, making use of his near infinite reality-shaping powers.

Unaware of Jamie’s actions, Brian and Meggan lived happily in Otherworld, working alongside Roma and Saturnyne when disaster struck as Earth 616 was radically altered by the insane and nigh-omnipotent Scarlet Witch. This set off a multidimensional tidal wave that threatened Otherworld and the many parallel realities of the Multiverse. Saturnyne decided to destroy the 616 universe to prevent the reality cancer from spreading but was prevented from doing so when Brian's mad brother, Jamie, showed up and destroyed the annihilator device. Roma and Saturnyne gave Captain Britain and Meggan a 48-hour window - the time necessary to fix the device - to restore the 616 universe; otherwise it would be destroyed.

As Roma had feared, once they arrived on Earth, Brian and Meggan became part of the altered reality. They were now the King and Queen of Great Britain and didn't remember their mission. During a royal party, they were reunited with Betsy as well as with their former teammate, Rachel. 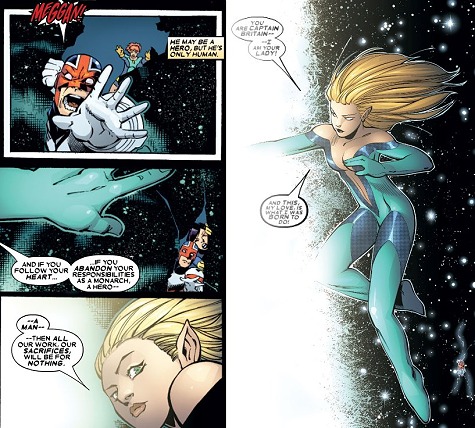 From afar, Roma influenced Meggan into mimicking her appearance to remind Brian of their mission. Realizing that something was very wrong and that time was running out, Brian and the others set out to act - and ran afoul of the House of M. During their efforts to restore reality, they a found a young woman named Nocturne who shouldn't even have been part of this reality. The fight with the troops of the House of M delayed the heroes and by the time they had located the hole in reality through which the tidal chaos wave was about to spread, it was almost too late. In order to deflect the impacting chaotic energies, Meggan had to venture into the void beyond. Working together, Captain Britain, Psylocke and Rachel managed to seal the gap, but only because of Meggan's selfless sacrifice. [Uncanny X-Men #462-465]

Soon reality was restored to normal but Brian only retained vague memories of his wife’s noble act. Captain Britain grieved for his wife but kept busy as a hero, first with a newly formed Excalibur team and later with a group of heroes working for the British intel agency, MI13. During one of their missions, the heroes entered a house in Birmingham whose inhabitants had given their souls to the demon Plokta for a chance to live in his dream corridor where their desires came true. Knowing Captain Britain was a danger to him, Plokta lured Captain Britain into what seemed to be the dream corridor to find Meggan slumbering in another dimension. Cap saved her and the couple was happily reunited.

Brian took time off from MI13 to be with Meggan and even opened a pub. It was here that his subconscious literally attacked him to show him this was all one of Plokta’s illusions. Cap logically assumed the same went for Meggan. She protested that she was real, but since she reacted to other people’s view of her, his disbelief would make her non-existent. Brian didn’t believe her and Meggan disappeared. However, this was the real Meggan. She re-appeared elsewhere in dream corridor but wasn’t with the MI13 team when they defeated Plokta and his dream corridor collapsed. With the team unaware that she was real, Meggan found herself in hell. [Captain Britain & MI13 #7-9] 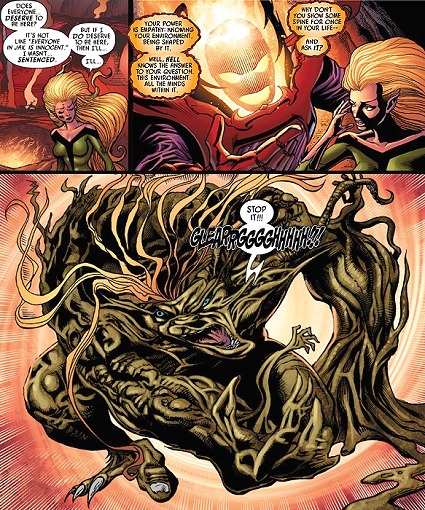 Meggan quickly realized that she wasn’t being tortured since nobody in hell seemed to be responsible for her. Her presence there was truly an accident. She was led to the Council of the Five, the powerful entities who rule various portions of hell and offered them the knowledge of what happened to Plokta in exchange for the answer to her question: Did she deserve to be in hell?
Dormammu tricked her into asking hell itself for an answer and Meggan opened herself to the realm’s influence. In response, Meggan transformed into a monster. The demons considered this a joke and banned her from their presence.

Furious at that treatment, Meggan held onto her anger which soon infected other denizens of hell thanks to her empathic powers. Over time, she created an entire army of followers. Eventually she made her way to Pluto, a ruler of hell who had fallen out of favor with the Council. 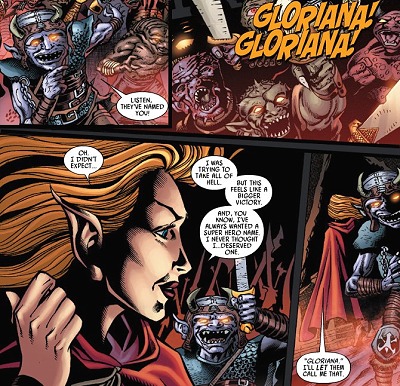 Pluto helped Meggan find a stable form. She decided to never let anyone judge her again. Meggan led her army against the lords of hell, always holding onto her hope and her love for Captain Britain. She eventually spread this hope and happiness to her demonic followers who gratefully named her Gloriana. At that point, she realized that she had given her followers much more than they could ever gain by conquering more territory in hell. After rewarding Pluto and leaving instructions for her army to turn their land into a safe haven for tortured souls within hell, Meggan left. [Captain Britain & MI13 Annual #1]

She followed an eerie call she was sensing, which led her out of hell and to Dr Doom. Latveria’s ruler had secretly struck a deal with Dracula who was leading a vampire attack on Great Britain. Doom planned to undermine the vampire lord's plans by using Meggan as his secret weapon. Doom left Meggan in Dracula’s flagship - ostensibly as a hostage to be used against Captain Britain. However, the more self-confident Meggan used her empathic power to undermine Dracula’s control over his followers, disrupting his already put-upon army. That moment, Captain Britain attacked the flagship as part of MI13’s offensive against Dracula and the lovers were reunited. 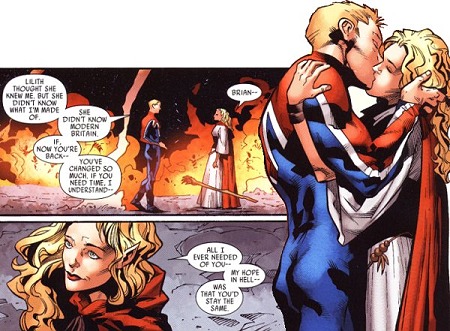 Together Cap and Meggan took out Dracula’s strongest ally, Lilith. With the battle won, Brian offered Meggan time if she needed it, but she assured him that all she ever needed was for him to stay the same. [Captain Britain & MI13 #14-15] Meggan is now happily reunited with her husband.