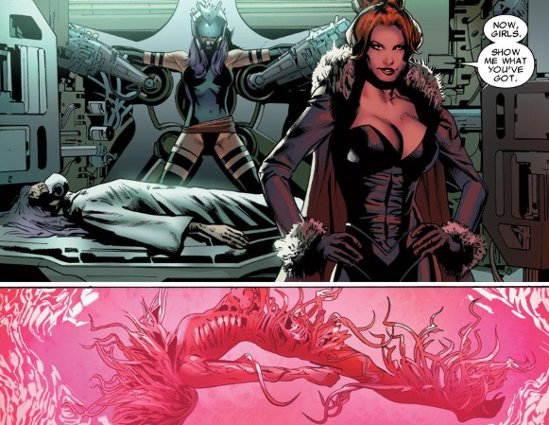 Kwannon was buried in Wolverine’s private cemetery in Akihabara, Japan, However several years later, her corpse was stolen by members of the Sisterhood, a covert organization of several of the X-Men’s deadliest villainesses. After Spiral repaired Revanche’s decaying body as much as possible, the Sisterhood’s leader, Madelyne Pryor, performed a magical spell that infused the corpse with the life-force of Psylocke, whom the Sisterhood had captured earlier. Once again among the living, Kwannon was also magically bound to obey Madelyne’s every command as were the other members of her Sisterhood. However, Madelyne had no specific need of Kwannon’s skills. Resurrecting Revanche was merely a test run for Madelyne, who planned to repeat the ritual to place her own consciousness in the re-animated remains of Jean Grey. [Uncanny X-Men (1st series) #508-509] 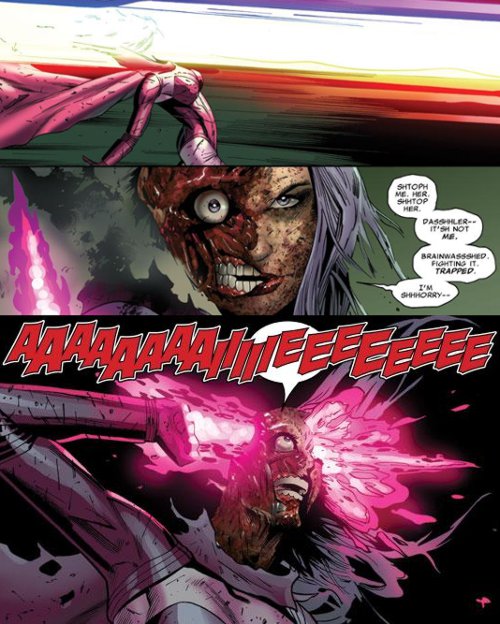 While Madelyne tried to carry out her plan (only to ultimately fail), Kwannon and several others engaged the X-Men, providing a necessary distraction. Revanche managed to fight Wolverine to a standstill but was eventually struck by a full-force laser blast from Dazzler. Half of Kwannon’s face was burned away and she was severely weakened, allowing Psylocke’s spirit to briefly take over. Betsy made Revanche use her telepathic knife on herself, frying her already-damaged brain even further. On the astral plane, the two psyches battled for a final time, with Revanche vowing to take Betsy along with her if she had to die again. Despite these threats, Psylocke’s mind proved to be the stronger one and her essence returned to the Asian body as Kwannon perished. [Uncanny X-Men (1st series) #510-511]

A second burial was denied to Kwannon, as operatives of the Hand incinerated her corpse with explosives when Psylocke tried to return it to her grave in Japan. [Psylocke #1]