Missing and believed dead for many months, Victor Creed eventually returned to strike at Wolverine once more. During the time of Sabretooth’s supposed death, his old master, Romulus, had been captured by Wolverine and imprisoned within Cloak’s Darkforce dimension. Despite his apparent freedom, either out of loyalty or interest in future rewards, Sabretooth kidnapped Cloak’s partner, Dagger, and forced him to free Romulus. In disbelief that his old foe could have survived decapitation by the Muramasa blade, Wolverine indeed confirmed that the corpse of Sabretooth was still in the grave he had dug. However, an encounter with Romulus and his previously unseen twin Remus led Wolverine back to the Weapon X facility, where he discovered dozens of Sabretooth clones, along with the original. [Wolverine (2nd series) #310]

NOTE: Although the Sabretooth decapitated by the Muramasa blade was clearly one of Romulus’ Weapon X clones, it’s unclear exactly when the switch was made. At best guest, it appears the clone was the Victor Creed that erupted from the stasis tank, killed Feral and ultimately died by the blade. 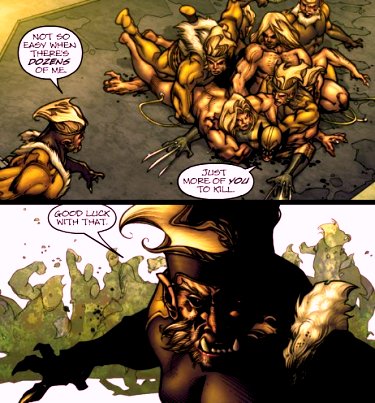 Despite any overarching plans Romulus might have had for Wolverine, Sabretooth did his best to kill his old foe, claiming that he had been away, training and making himself smarter. At first, it seemed an even fight. However, when a dozen or so of his clones emerged and began attacking Wolverine, Sabretooth made his escape. These clones, along with all those which had not been “hatched” were killed when Wolverine and Remus destroyed the Weapon X facility. [Wolverine (2nd series) #311]

After fleeing the Weapon X facility, Sabretooth returned to Romulus’ main headquarters in Italy. In short order, Wolverine arrived with Remus. Together with Romulus, Sabretooth would have put an end to Wolverine were it not for the X-Man’s allies Remus and both Cloak and the rescued Dagger. Faced with defeat, Sabretooth demonstrated an uncharacteristic foresight and activated a previously set upon escape plan before bailing. His master, Romulus, did not fare the same and was soon incarcerated in the Raft prison. [Wolverine (2nd series) #312-313]

Soon thereafter, Sabretooth accepted employment from the head of the Tokyo branch of the Hand, a young man named Azuma Goda, who had high ambition. His ingenious plan was to instigate a war between the feared Japanese criminal organization the Yakuza and the Hand ninja clan, a conflict which was set in motion when Sabretooth assassinated the head of the Yakuza during a daring mid-flight attack. [Wolverine (4th series) #20]

Sabretooth was enticed into this particular job by not just money alone. Shortly after her recent death, Goda had purchased the corpse of Mystique and then proceeded to use the Hand’s mystic rituals to restore her to life. Not only were her powers now enhanced by the process, Mystique’s personality shifted and she uncharacteristically took Sabretooth for a lover. Together, the two reveled in the carnage of the war they instigated and, despite the interference of Wolverine and Yukio, aided Goda into killing off the heads of the Hand and the Yakuza. 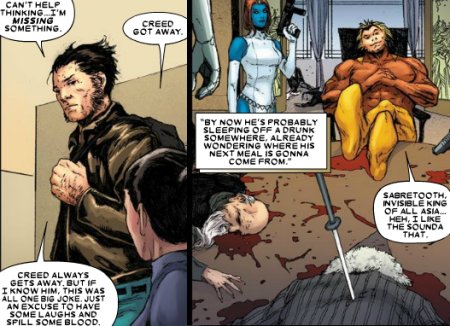 However, just at Goda’s moment of victory, Sabretooth betrayed his youthful employer, who was in turn killed by Wolverine. Sabretooth and Mystique then convinced the new Silver Samurai, as well as Lady and Lord Deathstrike, to join their cause, and together the group soon took over the remnants of all criminal and ninja organizations in Japan. [Wolverine (2nd series) #300-303]

Ecstatic in their victory, Sabretooth’s group hosted a celebratory party in Madripoor. To their surprise, it was subsequently crashed by Wolverine, who wished to let his displeasure be known in light of the carnage they had created in Japan and the suffering inflicted on his adopted daughter, Amiko, during the process. Along with the rest of the group, Sabretooth was gravely hurt, though left alive, before Wolverine left. [Wolverine (2nd series) #304]

Though they were the “invisible king and queen” of criminal Japan, Sabretooth nonetheless wanted to continue an active role elsewhere. To this end, Sabretooth accepted the commission of assassination from the young Kade Kilgore, the newest Black King of the Hellfire Club. The target was the Beast and in an unusual setting for Sabretooth. Launched into orbit about the SWORD space station called the Peak, Sabretooth killed several agents of SWORD before attacking the Beast directly. However, when Sabretooth turned to the Beast’s girlfriend before finishing him off, the Beast retaliated, pushing the spacesuit clad Sabretooth further into space. Though he had been a failure in his assignment, Kilgore ordered Sabretooth retrieved, in case his serviced were needed again in the future. [Wolverine and the X-Men #8] Indeed, once rescued, Sabretooth spent spare time training the young Kilgore in both hand to hand combat and with a sniper rifle. [Wolverine and the X-Men #24]

As it happened, Sabretooth and the Beast were to encounter each other quite soon thereafter. Now part of a new Brotherhood of Mutants led by Daken, Sabretooth, Mystique and several of his teammates ambushed a group of the Beast’s students while they were on a field trip to Genosha. The group’s true target was the young “Evan,” who was unaware that he was a clone of Apocalypse and whom Wolverine and the X-Men were raising to see if “nurture” could indeed triumph over “nature.” [Uncanny X-Force (1st series) #26-27] 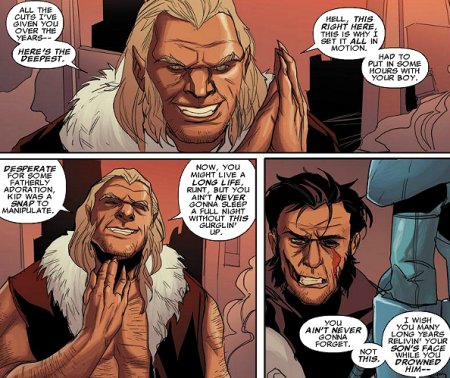 After kidnapping him, Sabretooth and the Brotherhood took Evan across the American Midwest, killing random people and doing their best to show him that everything the X-Men had explained about his life was a lie. Though the Brotherhood met with limited success, Sabretooth continued coaxing Daken, pointing out their shared similarities, as opposed to Wolverine’s hypocritical nature. Oblivious to this, Daken ate up the attention and was unable to see that he was being manipulated by Sabretooth, who had no real interest in recreating Apocalypse. To the contrary, he wanted to coax a fatal confrontation between Daken and his father, Wolverine, which occurred when X-Force arrived to retrieve Evan. Ultimately, Sabretooth’s plan bore fruit and he clapped and smiled widely after witnessing Wolverine kill his own son. Sabretooth fled when Evan turned the power of Apocalypse on him, but the greater victory clearly belonged to Creed that day. [Uncanny X-Force (1st series) #30-34]

Secure in his position as king of the Asian underworld, Sabretooth felt free to indulge himself in smaller schemes on the side. Apparently on a lark, Creed and Mystique teamed up with Lady Mastermind to rob a large number of banks and private fortunes in an effort to buy the country of Madripoor from Hydra. With the help of Lady M, they left behind a series of illusions that convinced the authorities for a time that the X-Men were responsible. When the real X-Men intervened on their deal with Madame Hydra, Creed and Raven were defeated, but simply escaped and went back to their full-time organization. [All-New X-Men #9-14] 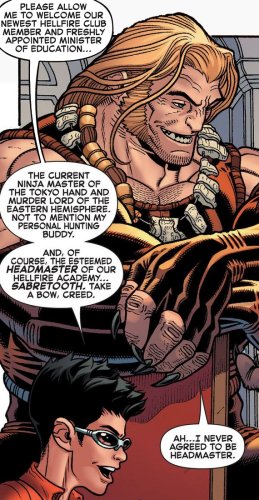 Sabretooth also lent his name and presence to the Hellfire Academy established by his protégé, Kade Kilgore. In exchange for a "mountain of money", Creed rented out his agents, Mystique, Silver Samurai and Lord Deathstrike to the Academy as they attempted to train the next generation of mutant super-villains, and then reap the rewards by selling next generation Sentinels to beleaguered companies and nations. As a mere consultant, Sabretooth shrugged it off when the X-Men destroyed Kilgore's miniature empire, and recruited the remaining members of the first Hellions class for his own private tutelage. [Wolverine and the X-Men #31-35]

Victor Creed and his criminal empire remain a major player on the world stage of villainy, and he is fast proving himself to be "too big to depose" as his resources and manpower continue to grow larger. It remains to be seen whether anyone will be able to stop Sabretooth and his grab for power.