BIOGRAPHY - Page 2
Soon thereafter, Generation X was attacked by Black Tom Cassidy, who kidnapped M and most of the other students and placed them somewhere in the Pacific on a raft made of plants. Adrift in the ocean, the kids were about to die from exposure when the usually calm and in control “Monet” suddenly freaked out and panicked. [Generation X #25-26] Fortunately, the team was found by Glorian, 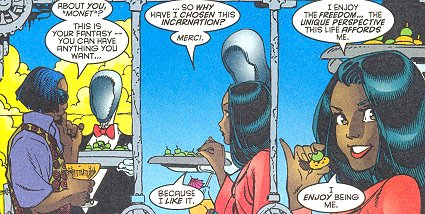 the Shaper of Dreams. Trying to give them happiness, Glorian altered reality for them. In the new world, “Monet” was united with her still human looking brother, Marius, and they enjoyed being on a sea cruise. When Marius asked why she would chose to be in “this incarnation,” when she could have had anything she wanted in the fantasy scenario, “Monet” answered that she enjoyed being herself and the unique perspective “this life” afforded her. Apparently, they were talking about the twins’ merged state. Eventually, Glorian had to realize that he hadn’t looked deeply enough, as his gifts weren’t what Generation X truly desired, and as a parting gift he transported them to Los Angeles. [Generation X #28] 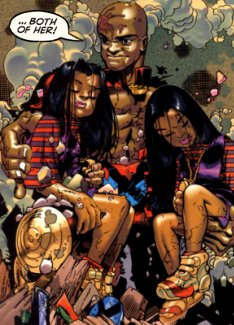 In L.A., Generation X were hunted by Prime Sentinels of Bastion‘s Operation: Zero Tolerance. While hiding out in a garage, well aware that these might be their final minutes together, Synch confided in M that he never had a girlfriend and that he wouldn’t want to die without having properly kissed. “Monet” replied that she had yet to have that experience as well and, declaring that “this doesn’t count” if they would not die, she passionately kissed her teammate. During the following battle, “Monet” was at the center of an explosion. When her teammates dug her out, it was not M they found under the debris but Claudette and Nicole, the blast having separated the twins. [Generation X #29-31]

The unconscious twins were brought to the infirmary of the Massachusetts Academy. Even Moira MacTaggert, one of the world’s leading experts on mutant genetics, had to admit that she had never seen or heard of such a case before, where two individuals would combine into one twice their age. [Generation X #32]

When the school was again under attack by Emplate and his minions, the twins woke up in the heat of the battle. Before anyone could stop them, Claudette and Nicole merged with each other again, 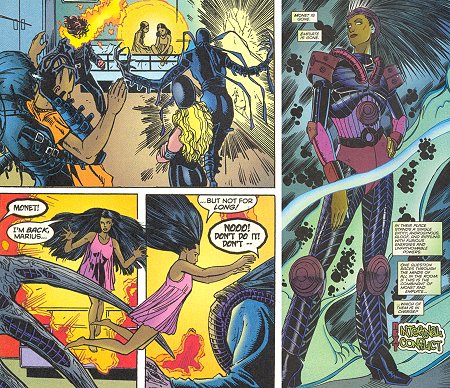 only to physically engage Emplate and incorporate him into their composite form too. Now referring to themselves as M-Plate, the androgynous creature claimed to be an entirely new individual that was more and different than the sum of its parts. Also having a secret agenda of their own to follow, M-Plate assumed command of Emplate’s minions and, after kidnapping Synch, they escaped to another dimension. [Generation X #34-35]

That dimension housed the universal amalgamator in a citadel at the edge of reality. Inspired by their own merged experience, M-Plate intended to use the amalgamator’s power to meld any other consciousness into theirs, so that all sentient beings of the universe would be joined into a single, all-encompassing awareness. Only one being had the power to activate the amalgamator and, while this person, a girl named Gaia, would have never agreed to help M-Plate, they brought Synch along, so that he would duplicate Gaia’s abilities for the plan to work. Synch had no intention of doing as he was ordered but, when M-Plate threatened to kill his friends and family, he reconsidered. [Generation X #36-37]

Fortunately, the rest of Generation X, along with the villain named Dirtbag, caught up with M-Plate and his minions. Intending to stop M-Plate’s scheme for power, Dirtbag consumed the composed entity, but it was too much to for him to digest all at once, and he exploded. 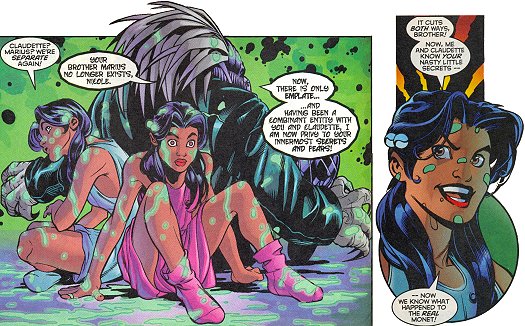 The three St. Croix siblings were separated again, with Nicole shouting that she now knew what happened to the real Monet. The rest of Generation X having no idea what she was talking about, they first worked on rescuing Synch and Gaia while Emplate and his minions destroyed the citadel to cover their escape. [Generation X #38-39] 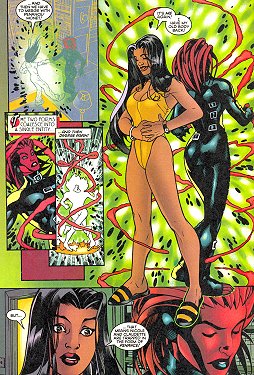 After their safe return home, it was finally time for Nicole St. Croix to reveal the full truth about herself and Nicole, as well as Penance. Because of the merger with Emplate, she had gained insight to his memories about what had happened back then in Monet’s room before she and Claudette entered. Emplate had approached the real Monet about joining him in the dimension he resided in but, when she mocked him for his hideous appearance, he punished her by transforming her into Penance. The real Monet had been among Generation X the whole time, but in this form she was mute and unable to reveal her true identity. Feeling guilty for kind of having stolen Monet’s life, Nicole knew of only one way to make up with her sister. First, she and Claudette merged once more, only to then merge together with Penance. Diverging again, they had traded places. The real Monet was freed from her prison, though now it was Claudette and Nicole who were stuck inside the body of Penance. [Generation X #40]

Although she didn’t show it, Monet felt terrible about her sister’s sacrifice, and she promised them to do whatever she could to help them, until they could eventually find Emplate and make him undo the spell. [Generation X #46] 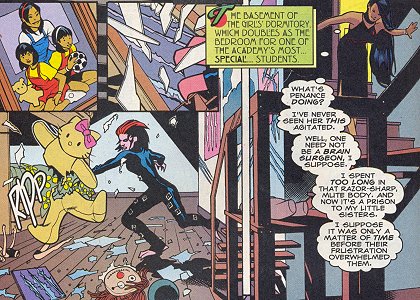 While Nicole and Claudette wanted to be patient, the situation took a turn for the worse. Soon thereafter, the Massachusetts Academy was opened to a human student body, forcing the twins to hide in the basement all the time, as their Penance body would have been too conspicuous to move around on the campus. Despite Monet regularly visiting her siblings, [Generation X #53] Penance eventually grew frustrated and trashed the room that had been decorated for her. Obviously, the eight year old girls couldn’t handle being stuck inside the razor-sharp body well.

Emplate chose the school dance for his next attack and, while he distracted Generation X, his minions were supposed to re-capture Penance for him. 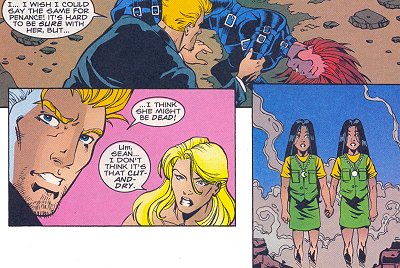 Generation X saw through this plan, though, and a fierce battle started. Eventually, Jubilee blew up the building they were all in and, while everyone else was under a protective dome, Emplate and Penance were fully hit by the blast. At first Generation X believed the twins dead when they saw Penance’ lifeless body, but the explosion had not only caused the twins to split, they had also been freed from their prison. To everyone’s surprise, the Penance body was no empty shell, though, and while it was never cleared up who was residing inside the Penance body, she remained animate and continued to work with Generation X.[Generation X #57] 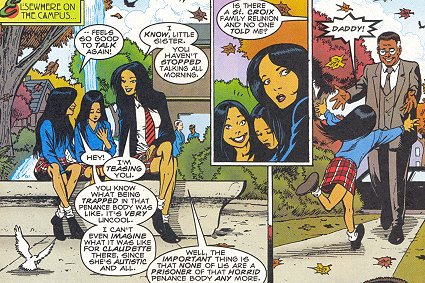 Nicole and Claudette, on the other hand, were picked up by their father as soon as he learned of the good news, and together they returned to the family estate in Morocco. [Generation X #58, Annual ‘99]

It is unknown if Nicole and Claudette have used their power to merge ever since, just like it also has yet to be revealed whether they were among the 90-95% of Earth’s mutant population to be depowered by the deranged Scarlet Witch’s reality altering wave.