Little is known about the early life of the mutant Amelia Voght. Once her mutant powers of transubstantiation manifested, she was rejected by her parents and experienced the fear and hatred that humanity had for those who were different. She discovered that the mist into which she could transform was now her natural state and that she could only resume her solidity through conscious effort. She struck out on her own and, through some means, studied to become a nurse. She hid her mutant nature and tried to live a normal life.

Some years later, Amelia joined the American Red Cross and relocated to India. It was here that she met the love of her life, Charles Xavier. 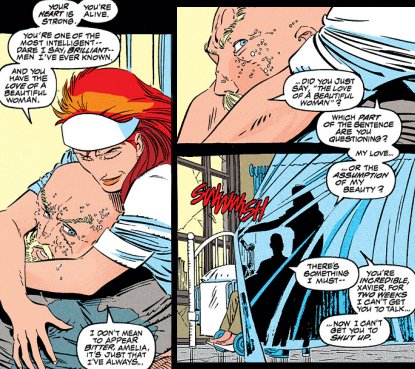 Amelia was working as a nurse when Xavier was admitted to the small hospital in which she worked. Her contact with Americans was sparse and she always made an effort to connect with those she met. Xavier was considerably older than Amelia but this didn’t matter to her. Charles was a challenge from the beginning. His legs had been shattered and he had sunk into a deep depression. The accident that crippled him had destroyed his sense of self as completely as it had his ability to walk. Amelia resolved to help him, despite his unwillingness. She served as his nurse, friend and coach as she helped with his intensive physical rehabilitation. She was unwavering in her firm support and belief that he could work through the trauma of his injuries. During this time, the two fell in love. 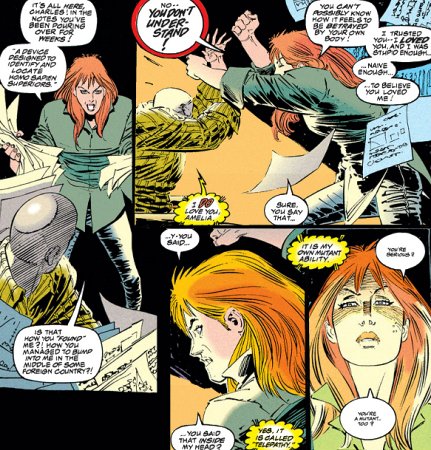 Following his rehabilitation, Xavier and Voght lived together in India. During this time, Charles did research and designed the plans for his initial mutant-detecting device, Cerebro. The pair was blissfully happy together until the night Amelia found Charles’ plans. Understanding the implications of such a device, Amelia accused Xavier of being a mutant hunter. Years of fear and internalized oppression burst forth as she accused him of using her for his own twisted means… since she herself was a mutant. Xavier was bewildered. As Amelia ranted relentlessly, he used his own powers to communicate with her telepathically. The two realized that they shared the same secret – they were both mutants. This revelation only intensified their connection to each other, as it was the first time in her life that Amelia had someone in her life she could be truly honest with.

After a few months in India, the love-struck couple returned to the United States and took up residency in Xavier’s Westchester mansion. They lived there together for several years. During this time, Xavier worked on various degrees and began developing his plans to turn his mansion home into a refuge for mutants. From the beginning, Amelia was opposed to the idea. Since meeting, the two had disagreed over the best way for mutants to live and survive. Xavier was already laying the foundations of his philosophy for mutant/human coexistence, but Amelia strongly believed that mutants were better off keeping to themselves and avoiding notice. Above all else, she felt that forming groups of mutants would only draw greater attention than necessary and intensify the fear, hatred and violence she had experienced in life. All she desired was to build a quiet life with Xavier. Nevertheless, the strength of Xavier’s convictions could not be swayed. She helped amass files on known mutants and assisted him in evaluating them, while at the same time hoping she could talk him out of his plans to unite mutantkind. [Uncanny X-Men (1st series) #309] 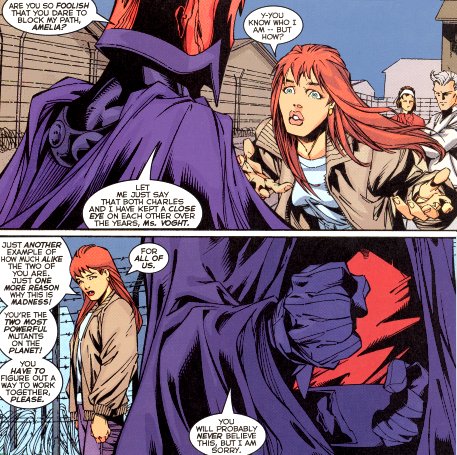 Despite Amelia’s concerns, Xavier sought out his old friend, Magneto, at the concentration camps in Auschwitz on the anniversary of his escape, in the hopes of reconciling with him. The meeting did not go as planned. Magneto arrived with his two youngest mutant recruits, Quicksilver and the Scarlet Witch. Xavier brought only Amelia. The pair of mutant leaders debated their philosophies briefly and ultimately realized that they could not or would not, see eye-to-eye. Realizing that the two were about to part as inevitable enemies on the battleground for mutantkind’s future, Amelia spoke up. To her surprise, Magneto greeted her by name, having kept tabs on Xavier over the years. Amelia begged the two mutant leaders to find a way to work together, but it was to no avail. They parted ways, each more determined than before that they were on the correct path towards mutant survival. [X-Men (2nd series) minus 1]

It wasn’t long before Xavier’s dream of providing a safe place for mutantkind was realized. Amelia’s life changed forever the night Charles brought Scott Summers to their home. Amelia had worried when Charles began to work with the young mutant, Jean Grey, but now he had brought a scared young mutant home. That night, Amelia packed her bags, as she had said time and again she would. As she moved to leave the venerable mansion, Charles found her and they briefly argued. Unable to sway her with words and panicked at the thought of losing her, Xavier reached out with his telepathy and 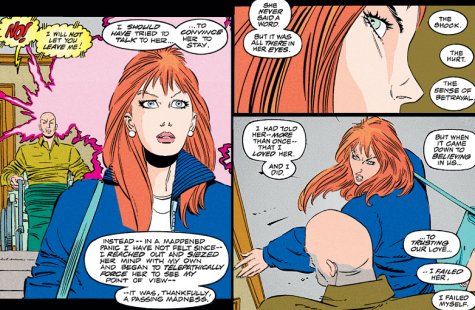 attempted to mentally force her to see his point of view. Amelia was stunned and dismayed. In all the years she had known him, Charles had refused to use his powers in such a ruthless, self-serving way. In stunned silence, Amelia slapped the man she loved more than anyone in the world and walked out of his life… leaving him alone with his students and the burden of leading mutantkind. [Uncanny X-Men (1st series) #309]

After she left Xavier, Amelia disappeared completely. Given her desire to avoid the growing politics of being a mutant, it is safe to assume that she lived for the next several years hiding the fact that she was a mutant and doing her best to live a “normal life.” At some point, this illusion came crashing down and drove her down a very different path. All that is known about this seminal event is that she lost her family and everyone she loved “to the flatscans.” Exactly what happened and who was responsible for this loss was never revealed but it left Amelia bitter and angry, her mistrust of humanity deepening into hatred.

Amelia was recruited by Fabian Cortez as part of the second generation of Acolytes following the “death” of Magneto. He used the fanaticism that many of the Acolytes felt in their reverence of Magneto for his own ascent to power. Given her anti-mutant sentiments, Voght now saw the wisdom of Magneto’s teachings. By virtue of her age, personality and experience, she became the default den mother of the Acolytes. Despite her growing devotion to Magneto’s memory, Voght often found herself in conflict with his allegedly anointed successor, Cortez. She challenged him on several fronts and came to question his devotion to Magneto. They squabbled over the interpretation of Magneto’s words and intentions and she suspected that he was manipulating Magneto’s memory and clearly did not trust him.

When the Acolytes captured Moira MacTaggart, Voght reveled in the chance to torment the woman. Voght was incensed when she learned that, years earlier, MacTaggart had abused her role as doctor and caregiver by manipulating Magneto’s genetic structure. Amelia was uncharacteristically brutal in her treatment and judgment of Moira while she was a captive of the Acolytes.

When the X-Men arrived to free MacTaggart, Voght avoided the battle. She knew that a clash between the X-Men and Acolytes could lead to an unwanted interaction with Xavier himself. She did not engage in battle, but was found by Xavier in prayer before Magneto’s helmet. Xavier was surprised to see her and Amelia responded bitterly, revealing that since they last saw each other she had lost her family to “the flatscans” and embraced Magneto’s way. Once again, she ran away from Xavier, teleporting away as the X-Men claimed victory over the Acolytes. [Uncanny X-Men (1st series) #300]

A week later, Voght teleported Fabian Cortez from the hospital where he was recovering from wounds he had received from Wolverine in the Acolytes’ battle against the X-Men. Cortez was enraged that Voght had not rescued him sooner and her sarcastic response hinted that she no longer accepted him as Magneto’s heir apparent. The Acolytes quickly reunited and continued their attacks upon humanity. Their actions brought them to the attention of X-Factor, who counted Magneto’s son Quicksilver among their ranks. The Acolytes clashed with X-Factor when they attacked a Sentinel base and tried to kill Senator Robert Kelly. Their real goal, as Voght cryptically pointed out, was more subtle – to influence Pietro to their point of view in the hopes that he would someday join their cause. [X-Factor (1st series) #92] 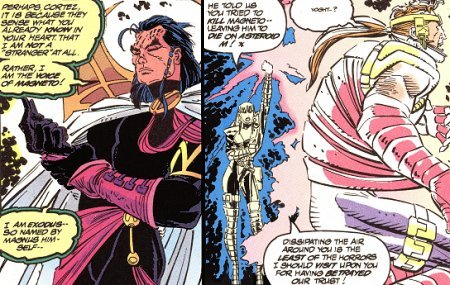 Amelia’s growing suspicions about Fabian Cortez were soon confirmed by the arrival of Magneto’s herald, Exodus. He revealed Cortez’s role in Magneto’s death to Voght and the other Acolytes, who attacked Cortez for his months of manipulation and betrayal. Exodus stopped Voght from dissipating the very air around Cortez and instructed the Acolytes to prepare for the ascension to Avalon that Magneto himself had orchestrated. Voght and the others were reunited with Magneto at the funeral of Illyana Rasputin. There, Magneto invited the mutants assembled there to join him in the ascent to his new mutant haven, Avalon and in his planned conquest of humanity. Surprisingly, the grieving X-Man Colossus accepted his offer. [Uncanny X-Men (1st series) #304]

The Acolytes time with Magneto was cut short when Xavier orchestrated a raid on Avalon with the sole purpose of taking out Magneto before he could launch an all-out war on humanity. Their plan succeeded and Magneto was left a mindless vegetable. Their next move was to try and convince Colossus to return to them. Believing he was suffering from a brain injury sustained in battle, they lured him to Earth with the promise that Kitty Pryde wished to join him among the Acolytes. Though Amelia did not yet trust Piotr, she teleported him to Muir Isle at Exodus’ orders. When Colossus did not return, Voght, along with Katu and Unuscione, came to fight for his return. The battle was brief, as Piotr chose to return willingly to Avalon, in the hopes that he could help the Acolytes know the various facets of their lord Magneto through his experiences with the man. Voght welcomed Piotr back and seemed eager to learn from him. In the weeks that followed, the two often debated their differing views and quickly developed a mutual respect for one and other. [X-Men (2nd series) #25, Excalibur (1st series) #71]