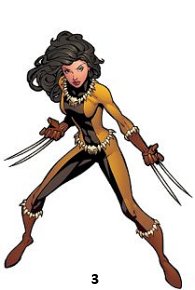 1) X-23's combat training and wetworks missions required her to wear a costume of sorts. Colored primarily in black, these simple outfits consisted of a pair of pants and a sleeveless top that zipped up the front and buttoned around the neck. Some variations included embellished details such as thin yellow piping that separated the black aspects and the yellow was also used for the kneepads and markings on the side or her torso. Her boots finished just below the knee and had a slit in them that allowed her foot claws to emerge. The whole ensemble was finished off with simple accessories such as a pair of leather arm bracers and a black belt with a circular buckle. [X-23: Target X #1]

2) When X-23 went after Wolverine for the first time, she wore a black and grey crop top with matching pants. Her boots were lace-ups that stopped just below her knees and the belt was made up of large golden hoops that finished in a square buckle. She continued to wear the arm bracers like her previous costume had and now she also wore a choker with a locket attached. Wolverine would later give her his black jacket with yellow X’s on the shoulders, which most of the X-Men were wearing at the time. [X-23: Target X #5]

3) When she ran across the X-Men again, she was working at a theme bar where people dressed as mutants. She wore a variation of the costume Wolverine had once taken from the Imperial Guardsman Fang. X-23’s version was an all-in-one tan body suit that had a dark brown yoke around the neck and a stripe running down to the waist and down the inside of either leg. It was adorned with a string of teeth that looped around each wrist and ankle as well as her shoulders and waist. The strings around her neck and waist also had the addition of a small skull in the center. The boots and gloves she wore were a slightly darker tan than the rest of the costume. [Uncanny X-Men (1st series) #450] 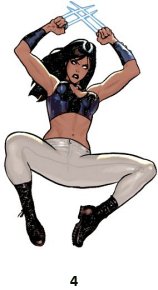 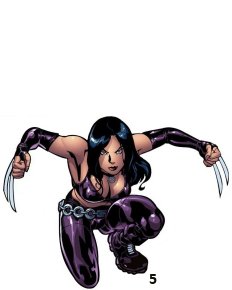 4) When X-23 was turned into Captain Universe, her costume was a mixture of her street clothes with the distinctive cosmic twist. Her pants were white, whilst her boots, crop top, arm bracers, locket and hair were all adorned with an image of the universe. [Captain Universe/X23 One-Shot]

5) When X-23 joined the X-Men’s student body, she wore a variation of the costume she used when she first fought Wolverine. Consisting of a deep purple crop top and pants, she also continued to wear her usual arm bracers, locket and boots. Her belt was also the same, though it was now colored silver and had a red X on the buckle. She also wore a deep purple jacket at times as well. [New X-Men (2nd series) #21]

6) During the Messiah Complex conflict, the entire New X-Men team dressed up in the X-Men’s distinctive training costumes. X-23’s consisted of a dark blue sleeveless body suit that had a yellow stripe running down her chest to her crotch. She wore dark blue opera-style gloves up her arms, which were also covered by large yellow gauntlets. She had yellow kneepads and armored boots as well. Around her waist was a plain yellow belt that had a large round X as the belt buckle. [New X-Men (2nd series) #44]

7) When X-23 joined the covert X-Force squad, she kept her regular costume design but adopted the team’s monochromatic color scheme. Her crop top now covered her shoulders and neck and as well as the light grey patches on the side it also sported grey “slash” marks on the shoulders. Her pants were mostly black with light grey sections on the outer thigh. Her boots, belt and opera gloves were also black. She also wore a black mask that had red lenses in. [X-Force (3rd series) #1]

8) When X-23 was briefly transformed by the Uni-Power again, her change into Captain Universe was more extreme than before. With no visible transition between her costume and her skin, her lower body was white and her upper body was blue. Along the blue section of her chest and arms a series of star constellations were mapped out. [X-23 (2nd series) #16] 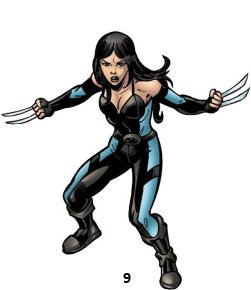 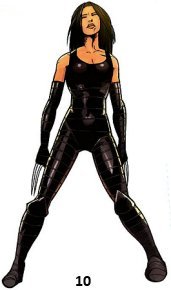 9) After X-23 joined the Avengers Academy, she wore a costume with a number of different variations to it. She originally wore a black and blue version of her X-Force costume. She eventually altered it to a new design that was primarily black with blue paneling on the legs. For training, she tended to just wear a sports bra as a top but on missions she wore a black tank top with blue paneling down the sides. As usual, she kept the locket, boots and opera gloves as well. [Avengers Academy #24]

10) When X-23 was kidnapped by Arcade, she was wearing an all-in-one black bodysuit with matching opera gloves and boots. [Avengers Arena #1]