Written By:
Blanchett.
Last Updated:
1st December 2008
(click on the image to see a bigger version of it) 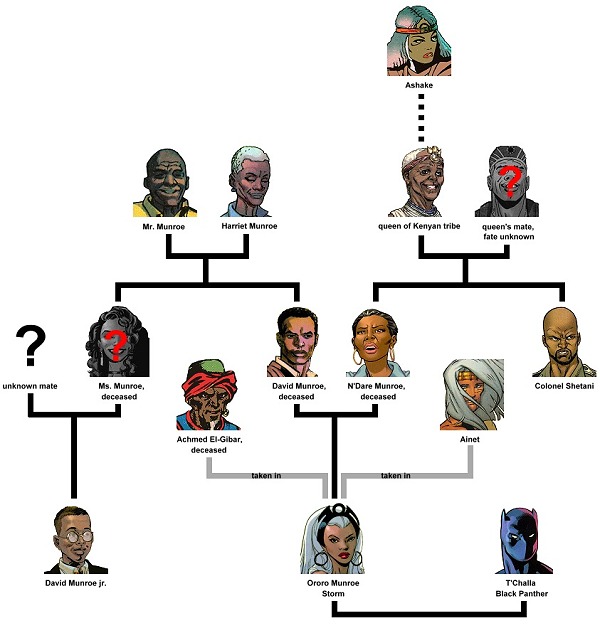 Ororo Munroe may have started life as common street thief but it should come as no surprise that the “Queen of Wakanda’s” lineage is far from humble. Ororo is a descendent of a line of African sorceresses. Many of these sorceresses possessed Storm’s trademark white hair and blue eyes. The tribe lived in a hidden area known as the Great Rift Valley in Kenya. [Uncanny X-Men #160, Uncanny X-Men Annual 2006]

Not a lot of information has come to light regarding this tribe. However, what is known is that at least one of these women was active in Pharaonic Egypt. Her name is Ashake. Ashake is a mystic of high renown and is credited with the creation of the Tarot, and she has claimed that Ororo is her granddaughter many times removed. Indeed the physical similarity between the two women is remarkable. [New Mutants (1st series) #32, Mystic Arcana: Magik]

However, Ashake recently travelled to the present era to train a young sorcerer named Ian McNee, putting her status as Storm’s ancestor into question. Unless Ashake had at least one child before her departure, or she eventually returns to her own time period it is unlikely she is Storm’s direct ancestor. [Mystic Arcana: Sister Grimm]

Other members of Ashake’s bloodline remained active in the Great Rift Valley. In modern times, a Queen of the tribe gave birth to a girl named N’Dare. [Uncanny X-Men Annual 2006] Despite her high standing as a princess in this matriarchal tribe, N’Dare decided to go against the traditions of her people and embrace the modern world and she became a student in the University of Kenya. It was there that she met fellow student, American photographer, David Munroe.

David Munroe was the son of Harriet Munroe and her husband. Harriet was one of Malcolm X aides and when David was a child she had taken him with her on Malcolm’s trip to Africa. David fell in love with Africa as a child and when he returned as a man, he fell in love with N’Dare. [Black Panther (4th series) #14] The two quickly got married and relocated to Harlem. Soon, their daughter, Ororo, was born, who unlike her mother sported their bloodline’s trademark white hair and blue eyes.

N’Dare was very unhappy in New York. She constantly felt discriminated against because of the colour of her skin and feared what kind of future her daughter Ororo would have there. When David was offered a job in Cairo, N’Dare convinced him to take it as she hoped their family would have a better life back in Africa. Unfortunately for N’Dare nothing could be further from the truth. During an Israeli-Arab conflict, a plane crashed into the Munroes’ home killing both N’Dare and David. [X-Men (1st series) #102, Storm (2nd series) #1]

The six year old Ororo somehow managed to survive and was found by some street urchins. Their leader Achmed El-Gibar taught Ororo how to survive and she was soon an expert thief. [X-Men (1st series) #113] Achmed became some sort of mentor, if not a father figure for her, and Ororo would rely on his teachings for many years to come. How much she respected him was obvious by the fact that she visited El-Gibar on his deathbed and made sure to arrange for his street urchins to be taken good care of after his passing. [X-Men Unlimited (1st series) #7]

Around the time her powers developed, Ororo felt an inner need to travel south, and over the course of a year, she walked about 2000 miles from Cairo to the Kilimanjaro valley. An elderly tribeswoman and witch named Ainet became a surrogate mother for Ororo during her stay there. She had a profound effect on Ororo and helped her deal with her new powers and responsibilities. [X-Men (2nd series) #77-78] It wasn’t long before Ororo was being worshipped by villages all across Africa as a Goddess. After some time as a “Goddess”, Ororo was approached by Charles Xavier and offered a place among his X-Men.

Storm had many adventures among the X-Men, and she rarely took leaves of absences from the team. Yet, during one such occasion, she learned more about her family’s history while investigating a series of murders in Kenya. Mutants who had lost their powers during the so-called M-Day were being murdered by a warlord named Colonel Shetani. With the aid of her teammates, Storm managed to defeat Shetani only to learn that Shetani was N’Dare’s brother and as such, Ororo’s uncle. Just like N’Dare, he had rebelled against the tribe’s traditions but for different reasons. As a man he felt discriminated against within the female-led tribe and sought to find power elsewhere. Following his arrest, Shetani led Ororo to the Great Rift Valley, where she finally met with her maternal grandmother. The old woman revealed that it was because of Shetani that no one ever came to find Ororo after her mother died, as Shetani had threatened to have Ororo killed should anyone even try. [Uncanny X-Men #474, Uncanny X-Men Annual 2006]

Around the same time, T’Challa, the King of Wakanda, also known as the Avengers’ Black Panther, proposed to Storm as the time had come for him to select a bride. T’Challa and Ororo had first met and fallen in love as teenagers, during the time that Ororo was travelling through Africa. [Marvel Team-Up (1st series) #100] Having crossed each other’s paths several times in their crime-fighting identities, they knew that they still had feelings for each other. After considering the responsibilities involved as well as her duties to the X-Men, Ororo decided to accept his proposal and become T’Challa’s wife. [Black Panther (4th series) #14-15]

Prior to their wedding, T’Challa used the resources of Wakanda to track down Ororo’s relatives on her father’s side. He tracked down Harriet Munroe and her husband to their new home in New Jersey. From them, Ororo learned that her father had had a sister, who named her son David, after Ororo’s father, who had died too soon. Unfortunately, the woman later became a drug addict and eventually died of AIDS, leaving young David in the care of his loving grandparents. [Black Panther (4th series) #16] After reconnecting with both sides of her family, Ororo was now ready to be wed and married T’Challa in a ceremony in Wakanda that was attended by both branches of her family and most of the superhuman community. [Black Panther (4th series) #18]