or “How about doing some research, you writers ?”

In the debut of the New Mutants in Marvel Graphic Novel #4, which also marked Cannonball’s first appearance, his father was already mentioned as deceased and Sam had to work in the mines to help his mother to feed his younger siblings. Fortunately for him, the discovery of his mutant powers led to Cannonball joining Xavier’s school. Little did readers know that the Guthrie family would later turn out to be a bunch of self-replicating chameleons, that constantly keep changing hair colors, with more and more unknown siblings showing up each time the Kentucky farm would be shown in a comic book. In fact, there might not be one single member of the Guthrie family that has been drawn or written consistently over the years. 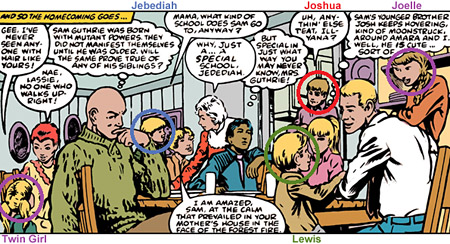 The other Guthries were first shown in Rom Annual #3, when Professor Xavier and the New Mutants paid Sam’s home a visit. The only ones named in that story are Sam’s younger brothers, Joshua and Jebediah. Other than them, three more kids were seen: a brown-haired girl (apparently Joelle) and two young blondes, a boy and a girl, who might be twins (Lewis and Cissie). 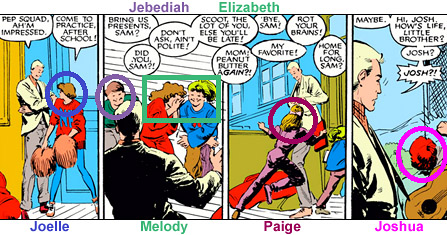 More children were seen and named in the family farm’s second appearance, New Mutants (1st series) #42. Besides Joshua, this issue marks the first definite appearance of brown-haired Joelle and the blonde boy, Lewis. Again, there are a few unnamed children this time, a boy (who in one panel has brown and, in the other, blonde hair), possibly being Jebediah, and three girls, two of them blonde (Paige and Elisabeth?). The other girl is brown-haired, apparently Melody.

Shortly after Husk had been introduced in the pages of X-Force, the Guthrie Clan was again briefly seen during the Phalanx Covenant in X-Men (2nd series) #36. Strangely, all of them are drawn blonde. Besides Joshua and Jebediah, another name is given - Elizabeth. Of the overall six children, the other three seem to be Lewis, Cissie and the brown-haired girl from before. 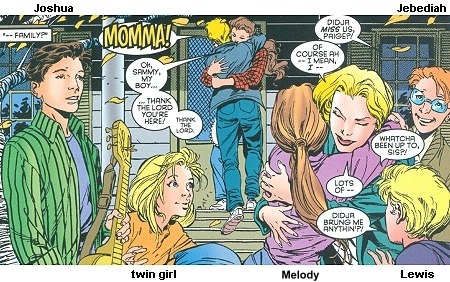 At the time Sam and Paige returned home for a family reunion in Uncanny X-Men Annual ‘95, the Guthrie Clan seemed pretty consistent. Besides Joelle (who during the story had run away), there were Joshua, Jebediah and the twins as pretty easy to recognize. Another child is once more the brown-haired Melody.

Recently, the X-Men visited the Guthries once more, two more children having developed mutant powers in the meantime – Joshua and Jebediah. Besides them, only Elizabeth was shown on panel.

The writers did not even let the deceased father rest peacefully in his grave. When Sam visited his home in New Mutants (1st series) #42, he also checked on his father‘s grave. The tombstone clearly reads “Thomas Zebulon Guthrie.“ However, years later, when Sam’s father was seen in flashbacks of X-Force (1st series) #97, he was called “Ty“ and, on top of that, in Uncanny X-Men (1st series) #438, he is mentioned as Zeke.

What the name is for Mr. Guthrie, the hairdo is for his wife. In every appearance, she showed up with a new hair color. So far, she has been portrayed with gray, blond, brown, red and black hair. Now, one could argue that Lucinda has a rather skilled hairdresser but that is kind of doubtful in the middle of nowhere in Kentucky. Besides, how could she afford to change her hairdo every two months when she has to feed over half a dozen kids?
Anyway, at least she was wearing a checkered shirt in almost every incarnation, so that the kids could still recognize their mother.

Now, coming to the children, let’s try to get them into the right order (if possible) - oldest to youngest - starting with the obvious one:

Not much to say, besides that his middle name was established in New Mutants (1st series) #42. Sam recently carried on the family traditional with Josiah, his super-powered son with Izzy Kane, Smasher.

Oldest after Cannonball is Paige, who always dreamed of following into her brother’s footsteps and becoming a mutant like him. When her wish came true, it wasn't quite what she had expected but, over time, she has improved control over her husking talent. Though she seems to be one of the two unnamed blonde girls in New Mutants (1st series) #42, the first time Paige is called by name is in X-Force (1st series) #32.
Originally it was implied that Joshua was the second child of the Guthries, some quotes in New Mutants (1st series) #42 referring to him and “the little ones.” However both Uncanny X-Men Annual ’95 and Uncanny X-Men (1st series) #445 clearly established Paige as the second oldest.

Next in line is Joshua, who kind of took Sam’s place when he left and helped their mother to hold the family together. For a time, he feared becoming a mutant like his older brother and he was angry at Sam for abandoning them. Reaching puberty, Josh got a beautiful voice, which has often been described as a “one man choir.“ For a long time, Josh denied this was a mutant ability, though he also manifested a rather obvious mutation – red feathered wings, which he kept hidden as well as possible. Only when performing on stage with his band did he let them show, the audience believing it to be some sort of stage gimmick. Joshua’s hair color varies from red to brown, depending on who drew him.
After coming to Xavier's School, Josh began calling himself Jay (partially to distinguish himself from his teammate, Joshua Foley, Elixir). Jay was killed by Reverend Stryker and Nimrod shortly after M-Day.

The brown-haired Joelle was already established in New Mutants (1st series) #42 and her jealousy of the “special” siblings led to her being lured into the fanatic group called Humanity’s Last Stand. However, when her superiors attacked Sam and Paige, Joelle realized her error and helped to expose the group.

Another sister is Elizabeth, who has blonde hair. She seems to have been the other blonde girl in New Mutants (1st series) #42, though she is first called by name in X-Men (2nd series) #36. Certainly, this is no coincidence, as only a few months later a character called Elizabeth Guthrie appeared prominently during the Age of Apocalypse, calling herself Amazon.
However, a slight problem remains. Although Cannonball’s quotes that refer to her as “big sister“ could be explained away as a pun, based on her growing power, a narration box in Factor X #1 established Liz to be older than Paige. Elizabeth has also never manifested a mutant ability in the main timeline.

This poor Guthrie sister was apparently not even deserving of a name or age. Although it was rather obvious that there was definitely one more sister that was not Paige, Joelle, Elisabeth or the female twin Cissie (as both in New Mutants (1st series) #42 and Uncanny X-Men Annual ’95 she appeared in the same scenes as them), Melody’s name was only revealed in Uncanny X-Men (1st series) #444-445, after she enrolled at Xavier’s School.
Melody even might have been in X-Men (2nd series) #36, holding a teddy bear. Don’t bother about the blonde ponytails; in that issue all Guthries are blonde, even Joshua and Lucinda. Melody has since been depowered after the Decimation, and sent home to Kentucky.

This one seems to be an easy case, at first glance. Though not yet wearing the glasses in his first appearance (Rom Annual #3), ever since they made him stick out rather easy from the rest of the siblings in the following issues. That is, until he manifested his own mutant power to channel electric energies through his eyes.
Possibly as a side effect of his mutant power kicking in, his eyesight improved. However, that would not explain why, all of a sudden, he has dark hair, though when every time before he was reddish-blond. Either way, Jeb also suffered in the Decimation and lost his powers.

That leaves us with children eight and nine, both already shown in Rom Annual #3. Approximately the same size and age, these two blondes seem to be twins. The boy already was called by name in New Mutants (1st series) #42; the girl named Cissie in the Endangered Species serial was apparently his twin. In the above serial, Lewis was injected with necrotized DNA from Neverland by the Dark Beast, and was on the verge of death. Paige mentioned he was in the marching band at school in X-Men: Divided We Stand #1, indicating he did recover.

What, yet another one ?

It seems that there is a tenth kid out there. In X-Men (2nd series) #48, Sam mentions his “nine brothers and sisters” during a poker game. Including him, that would make an overall number of ten Guthrie kids. Hank McCoy mentioned Lucinda Guthrie had conceived ten kids as well in New X-Men (2nd series) #42.
Possibly this child is another girl. In fact, she might be the girl with the teddy bear in X-Men (2nd series) #36, as she seems somewhat young to be a fit for Melody.

On a side-note, there is also an Uncle Luke, who happens to be the younger brother of the deceased “Ty,” the father of the Guthrie siblings. He first showed up in X-Force (1st series) #96 and is currently in prison for grand theft auto. Yet he seems to have a good heart and plans to go straight once he gets released. Despite Sam’s offer to bust him out, Luke preferred to stay in prison and serve his time.

Readers had high hopes for the Guthrie Clan to be sorted out when both Husk and Cannonball made it to the line-ups of the main X-Men books and, indeed, an entire story arc focused on the Kentucky born family with Uncanny X-Men (1st series) #437-441. Unfortunately, though, it solved nothing, only further adding to the confusion. The artist/colorist was clearly off there. Of the four Guthries he used (besides Husk), he managed to get two of them wrong, which especially in the case of Lucinda was quite hard to do, adding yet a fifth hair color to her many looks.

Storywise, it was also a rather dubious decision to have so many of the siblings turn out to be mutants. Sure, it made for an interesting story theme, based upon Shakespeare’s “Romeo and Juliet,“ but it remains to be seen if it was really worth it. Right now, five of the children are mutants, with a potential sixth (Elizabeth) waiting in the wings. It reached the point where mutant powers are nothing special in this family anymore and it has taken away from the many different perspectives that could have been used. While before there were some mutants who would feel guilty of “abandoning” the rest of the Guthries and normal children who’d either accept or envy the mutants among them, now the only differences left seem to be which abilities each of them manifested.