The early life of the mutant Callisto is shrouded in mystery. She has alluded to a childhood spent among normal humans and of physical beauty lost. She tried living peacefully among humans, but like many mutants was attacked by humans who could not accept a mutant among them. This incident left her scarred and embittered. She chose to live apart from humanity and adopted the name Callisto after the Greek myth of a lovely nymph who was seduced by Zeus and then transformed into a bestial form (often a bear). 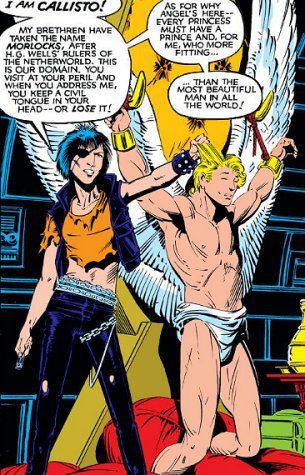 Fleeing human society, Callisto found a new home in the abandoned tunnel system beneath New York City. She soon found others like her, mutants who sought a refuge against the cruelty that they had experienced among humans. Among them was Caliban, whose mutant-tracking powers led them to others. Along with Caliban, Sunder, and Masque, Callisto formed a new society for mutants underground. She dubbed them the Morlocks, after the lower caste monsters that dwelled underground in the H.G. Wells novel The Time Machine.

Having cemented her place as the Morlocks’ leader, Callisto decided that she needed a consort. She selected Warren Worthington III aka Angel, who she considered “the most beautiful man in the world”. She sent Sunder to kidnap Worthington and had him brought to her in the Morlock Tunnels. The X-Men were alerted to Worthington’s abduction and tracked him to the Morlock Tunnels. Callisto met the team head on, declaring Angel hers and proceeding to cut his pinfeathers to insure that he would stay with her underground. The X-Men fought to free Warren and Callisto ordered her people to engage in combat but commanded that the X-Men be taken alive. Despite their superior training, The X-Men were overwhelmed by the Morlocks’ numbers and hampered by their efforts not to harm their fellow mutants. They were taken captive and forced to bear witness to Callisto’s marriage to Angel.

Once they awoke, the X-Men made a desperate attempt to escape with Angel. Nightcrawler managed to subdue Callisto and tried to use her as leverage to facilitate their escape. The Morlocks proved more formidable than the X-Men suspected when Plague used her mutant touch to infect Storm with a deadly ailment, balancing the odds once more. The X-Men relented to save Storm but things escalated when Caliban arrived with Kitty Pryde, who was near death due to Plague’s touch. Nightcrawler learned from Caliban that Callisto could be dethroned through a duel to the death. He readily did so but was commanded to step down by Ororo, who insisted on taking on Callisto herself. Callisto saw Storm as soft and didn’t see her as a credible opponent. Rather than end the duel quickly, Callisto toyed with Ororo and taunted her. Callisto’s cockiness proved to be her downfall. Though she drew first blood, she was as surprised as anyone when Storm caught her arm with her cloak and drove her knife into Callisto’s heart.

Storm won both the X-Men’s freedom and leadership over the Morlocks. Callisto would have died from the wound had it not been for the timely intervention of the Morlock Healer. [Uncanny X-Men (1st series) #169-170] 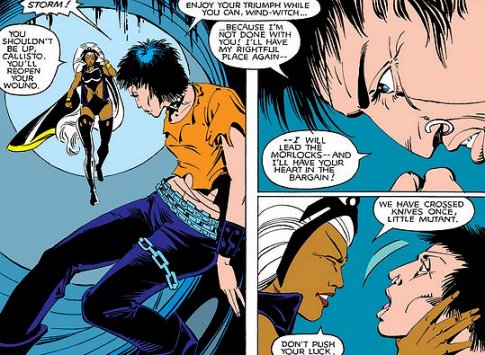 Callisto was soon on her feet and despite the need to recuperate, sought out Storm shortly after the weather witch had claimed leadership of the Morlocks. Callisto vowed to win back her place and exact her revenge on Ororo. Storm reminded her what happened the first time they fought and then ordered Sunder to put Callisto back to bed. [Uncanny X-Men (1st series) #171]

Determined to get revenge on Storm and reclaim her place as the Morlocks’ leader, Callisto visited Caliban, who was despondent that Kitty Pryde had left him. During the X-Men’s conflict with the Morlocks, Kitty had promised to stay with the love-stricken Caliban if he aided the X-Men against Callisto. Though it had been some time, Kitty had not returned to him as promised. Callisto decided to take matters into her own hands. She and the other founding Morlocks, Sunder and Masque kidnapped Kitty. They left in her place a dead girl whose features had been manipulated by Masque to perfectly match Kitty’s. Callisto took great pleasure in seeing Ororo’s “Kitten” forced to marry Caliban. Kitty reluctantly agreed to this when she learned that only the Morlock Healer’s power could save her true love, Colossus. In exchange, she prepared herself to join the Morlocks and Caliban forever.

However, as Callisto bid the two young mutants to say their vows, the X-Men arrived. Storm objected to the marriage leading to yet another conflict between the X-Men and the Morlocks. Callisto used the opportunity to attack Storm and challenge her for leadership. The battle was ended before it truly began by Kitty, who explained that she was there of her own free will and determined to resolve things honorably. After the Morlocks helped to heal Colossus, Kitty returned with them and fully accepted her place at Caliban's side. As the wedding was about to resume, Caliban realized that Kitty did not love him and released her from her promise to be his. [Uncanny X-Men (1st series) #176, 178-179] 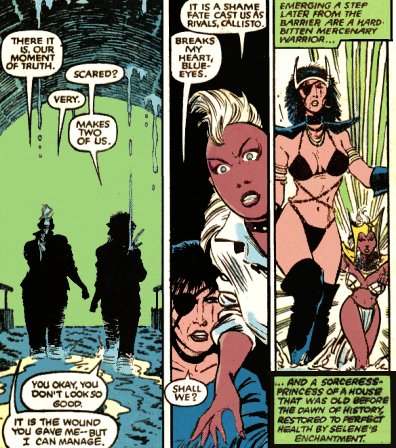 A short time later, all of Manhattan and its inhabitants were mystically transformed by the wizard Kulan Gath to match the Hyborean Age from whence he came. The Morlocks became his chief enforcers, acting out his bloody orders and enforcing his rule over the city. As captain of the guard, Callisto was sent to apprehend Storm and bring her to Kulan Gath. During the hunt, Ororo and Callisto plunged into the waters of New York harbor and passed through the mystic barriers surrounding the city. They reverted to their true selves and Ororo saved Callisto from drowning. They were rescued by federal forces and held for questioning. Cal was annoyed to owe Storm her life but even more furious that Kulan Gath had made her and her people his playthings. As they plotted their escape and their next move against Kulan Gath, Callisto learned that Storm had recently been stripped of her mutant powers. Callisto was determined to win leadership of the Morlocks back from Ororo on equal terms. At the same time, she viewed her rival as one of the Morlocks now and vowed that if Ororo didn’t kill the person responsible for negating her powers, then she would. The pair returned to Manhattan and together were instrumental in overthrowing Kulan Gath and saving the Morlocks and restoring the city. This marked a significant shift in the rivalry between Cal and Ororo and from this point, the two women began to develop a mutual respect and understanding. [Uncanny X-Men (1st series) #190-191]

A few days after Gath’s spell was thwarted, Professor Xavier was nearly beaten to death. Luckily, he was found by a Morlock and brought to the Healer. Callisto greeted Xavier and provided him with an introduction to Morlock society… and fashion. As she was escorting the X-Men’s mentor to a train that would take him home, she was alerted to the brutal murder of Annalee’s children. This illustrated her belief that humanity would not allow mutants to live in peace, even those who had removed themselves from human society. She vowed that if the humans wanted a race war, she would give it to them. Annalee's grief prompted her and some of the other Morlocks to defy Storm's edicts and kidnap Power Pack to replace Annalee's lost children. The X-Men came to their aid and when Callisto learned of these, she ordered them to return the kids and make things right. Though she shared Annalee's grief and vowed to exact revenge for the murder of her children, she sternly warned her not to break Morlock law again. She declared Power Pack to be the friends of the Morlocks and off-limits, just as the X-Men were. [Uncanny X-Men (1st series) #193 & 195, Power Pack (1st series) #12] 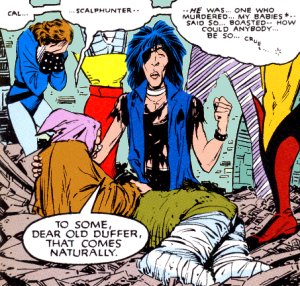 Callisto and the Morlocks would need all the allies they could muster in the dark days ahead. Their underground community was attacked by the lethal team of assassins called the Marauders. These agents of the mysterious Mister Sinister were ordered to wipe out the underground community of mutants and any who opposed them. Their leader Scalphunter had been responsible for the murder of Annalee’s kids weeks earlier and boasted about it during the Marauders’ assault on the Morlock Tunnels. Callisto fought valiantly but the Morlocks were no match for the Marauders, whose combination of powers and sheer brutality easily overwhelmed the misshapen mutants. Only the timely arrival of the X-Men turned the tide. Callisto cradled Annalee’s body as she died, just one of the dozens of Morlocks who were killed that day. The X-Men drove the Maruaders off, but the cost was high. Colossus, Nightcrawler, and Shadowcat all sustained serious injuries. The surviving Morlocks took refuge at Xavier’s mansion where a makeshift infirmary was cobbled together by their ally Moira MacTaggert.

The massacre of the Morlocks rattled all those involved. None moreso than Storm, who felt responsible for what happened to the Morlocks as well as the dire injuries her teammates had suffered defending them. Ororo had already begun to question her place as leader of the X-Men since being depowered. Overwhelmed by all that had transpired, Ororo fled the mansion. Callisto followed and confronted Storm. Ororo tried to relinquish her place as the X-Men’s leader but Callisto would have none of it. She reminded Ororo of the commitments they had each made when they accepted the mantle of leadership and demanded that she rise up and fight for those who had placed their trust in her. Callisto confessed that despite their rivalry, she had come to respect Ororo and was going to make certain that she remained worthy of that respect. 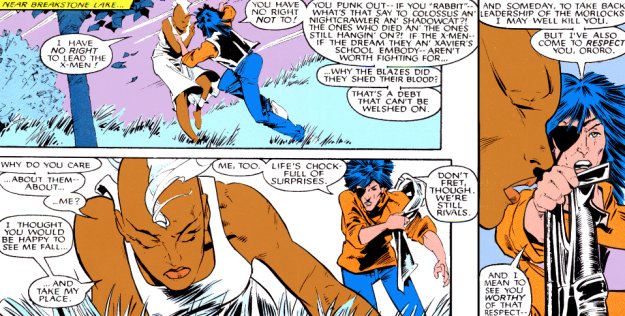 Callisto remained with the X-Men for a short time after the massacre. Though she wanted nothing more than to hunt down those responsible, her primary concern had to be protecting those who had survived. It was decided that the wounded Morlocks and X-Men would be safer at Moira MacTaggert's research lab on Muir Island. Callisto accompanied them, taking on the role of bodyguard to Dr. MacTaggert to thank her for her services and for opening her home to the remaining Morlocks. [Mutant Massacre]