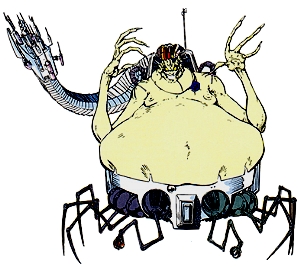 Since the Spineless Ones had slaves to do all their work for them, they quickly became addicted to television. They worshipped the person who created the best television shows. For many years, a megalomaniac called Mojo was their absolute ruler. His shows were created using the slaves as 'actors' who were placed in real situations. His greatest star was the being that later became known as Longshot. Longshot escaped and became leader of the resistance against Mojo. He commanded several insurrections against Mojo, but he mostly was defeated. For a short time a creature called Mojo II, the Sequel, became the leader of the Mojoverse, but Mojo later returned and claimed his throne back.

According to Longshot's wife Dazzler, most of the Mojoverse was destroyed by Mojo's newest creations: X-baby versions of Apocalypse, Holocaust, Sugar Man and Dark Beast. Whether Mojo and the other Spineless Ones are gone for good, remains to be seen. [Uncanny X-Men #393]

Recently the dimension hopping group Exiles found themselves abducted to the Mojoverse. Things seemed to back to the way they were: The Spineless Ones ruled, Mojo being in charge, and the Slave Race are slaves again. However, due to the Mojoverse's unique temporal status, especially with timedancer Spiral involved, this incident could have occured at a point before the AoA babies went on their rampage. [Exiles #18-19]