SLAVE RACE OF THE MOJOVERSE 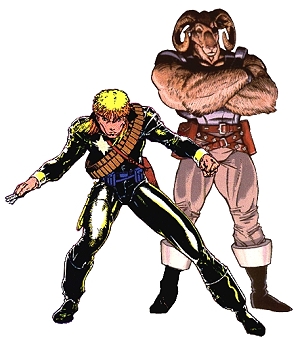 The Slave-race of the Mojoverse are mostly humanoid beings that have two hearts, hollow bones, a leather-like skin and only four fingers (including thumb) on each hand. Some slaves have animalistic features like Quark, who has a goat's head. The slaves have when compared to an average human increased strength, agility and healing capabilities.

Their inventor Arize created them as slaves for the Spineless Ones. These slaves had the form of the demons from the Spineless Ones' nightmares (humans for received TV transmissions). Arize didn't want his creations to be slaves so he put free will and insurrection into their genetic make-up. He also made a slave, who would one day become a leader: Longshot.

Longshot has led the resistance against Mojo and the mediacracy of his homeworld. Most of his insurrections failed, but with the help of the X-Men, Mojo was temporarily driven away. Mojo II the Sequel, a slave-race creature with some of Mojo's characteristics, became the new leader, but his rule was as tyrannical as Mojo's was. Mojo returned to power, but his rule didn't last long. His newest creations, X-baby-versions of several X-Men villains from the Age of Apocalypse (Apocalypse, Holocaust, Sugar Man and McCoy) were too powerful and destroyed the Mojoverse. Whether Longshot and the rest of the slave-race are dead, remains to be seen. [Uncanny X-Men #393]

Recently the dimension hopping group Exiles found themselves abducted to the Mojoverse. Things seemed to back to the way they were: The Spineless Ones ruled, the Slave Race were oppressed again and Longshot held in prison until he began leading a new rebellion. However, due to the Mojoverse's unique temporal status, especially with timedancer Spiral involved, this incident could have occurred at a point before the AoA babies went on their rampage. [Exiles #18-19]