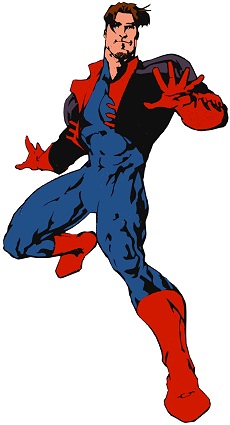 Powers:
surrounded his body constantly with a pliant field of biokinetic energy, which served to protect him from all forms of physical damage, could be shaped into simple forms like wedges or ramps, and rapidly expanded to push objects away from him

BIOGRAPHY
Conceived by two different fathers, Jared Corbo and his younger brother, Adrian, were born somewhere in Canada to an as yet unmentioned mother. For reasons unknown, the two boys were raised in the Hull House Orphanage, based in Orloo. Possibly their mother died or was deemed incapable of raising Jared and Adrian. Another option might be that Mrs. Corbo was pressured into letting go of her children, as the orphanage had ties to Canada’s Department H and was watching over so-called “legacies,” 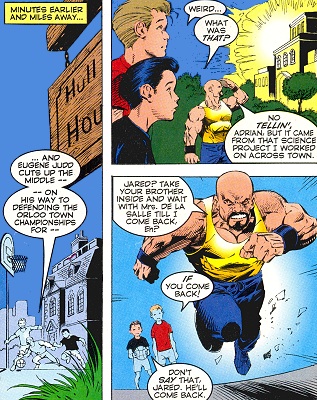 Jared had never met his father but he knew that he once was the world’s middleweight boxing champion, as his father had once sent a letter to the orphanage with no return address. [Alpha Flight (2nd series) #5, 7] By the time he was six years old, Jared became the victim of physical abuse, though it is not clear whether that happened before or after he came to live at the Hull House. As a result, Jared grew up to be a loner and he kept most people at arm’s length not to get hurt.[Alpha Flight (2nd series) #12] Still, there were also some happy times at the Hull House. For a while, the Corbo brothers were regularly visited by Eugene Judd, a volunteer at the orphanage who would often play basketball with Jared and Adrian. [Alpha Flight #minus 1]

Eventually, both Corbo brothers manifested mutant powers. Although Jared often mocked Adrian for being weak and too caring, it was Adrian who gained the rather aggressive ability to transform parts of his body into razor-sharp

metal, whereas the athletically inclined Jared displayed a defensive force-field. While he could alter the field’s shape and reach, he could not shut it off entirely. A thin layer of the impenetrable force field always remained around Jared; with only light and air being able to pass though. As soon as the Corbo brothers were transferred to Department H, Jared was equipped with a special food converter. [Alpha Flight (2nd series) #7]

When Department H re-started the Flight program, the Corbo brothers were given the codenames Radius and Flex and inducted into the new Alpha Flight. The new team only had limited time to train - and poorly - before they were dispatched to take down the terrorists and the Zodiac. Radius was over-confident and cocky. During the battle, he disobeyed orders and distracted his brother from watching the back of their teammate, Madison Jeffries, allowing the Zodiac to kidnap him. [Alpha Flight (2nd series) #1]

Their first mission being a complete failure was just one of many things that Department H’s General Clarke made Alpha Flight forget about in brainwashing sessions. This semi-regular tampering with their memory might also be the reason why the Corbo brothers didn’t recognize their fried Eugene Judd, aka. Puck, who was serving on the team alongside them. [Alpha Flight (2nd series) #3]

When Alpha Flight were next called into action, it was decided that only the veteran members would respond. The younger recruits, specifically Jared, were disappointed to be left behind as the mission was in his hometown, Orloo. 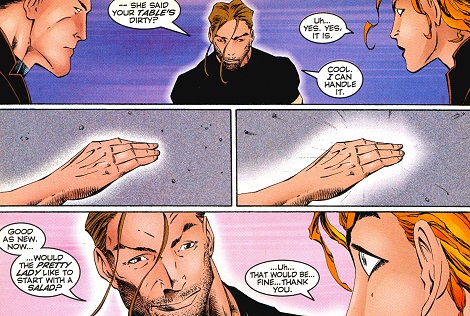 Deciding to have some fun on their own, Radius talked Flex and their teammate Murmur into breaking Sunfire out of a special lab at Department H and go on a road trip together. As chance would have it, they stopped at a diner run by the hypnotist, Mesmero. The villain enthralled the four heroes into acting as the staff of the diner, with Radius using his force-field to clean dirty tables. Fortunately, the other Alphans came after the rookies and, during the ensuing battle, the free wills of Radius and the others were restored. [Alpha Flight (2nd series) #3-5]

Despite this incident, Jared’s continued to disobey orders, outright questioning the authority of team leader Guardian. Several of the other Alphans tried to reason with Radius and get him to act more like a team player, but he wouldn’t have any of it. Instead, he kept shutting his teammates out, whether it was Murmur’s sexual advances or some well meant advice from the veterans. Around the same time, Flex had started an online search for the names of their parents and came up with the identity of Jared’s father. Apparently, Radius is the son of Unus, the Untouchable. It has yet to be revealed, though, whether Adrian ever told his brother about this discovery. [Alpha Flight (2nd series) #6-10] 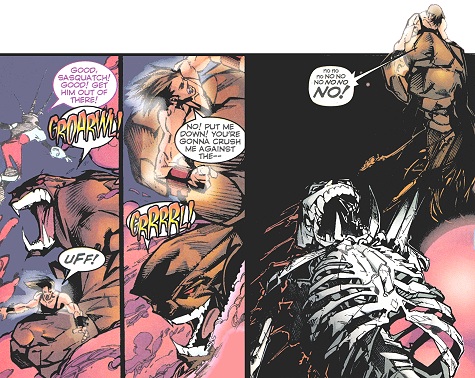 Shortly thereafter, when the Zodiac attacked Department H, Alpha Flight decided on a tactical retreat. However, eager to prove himself Radius ran off without a plan and he engaged the villains who outnumbered him by far. Eventually, the Zodiac unleashed a flesh-eating bacteria. Radius would have died if not for the team’s man-ape Sasquatch acting on pure instinct to lift Radius up out of the bacteria’s reach, even though it cost him his own life. [Alpha Flight (2nd series) #12] 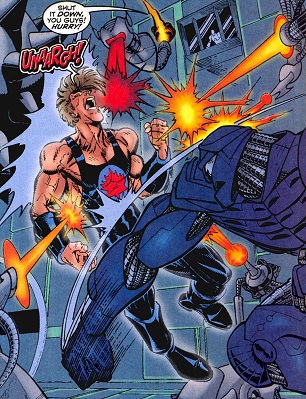 As Alpha Flight believed that the deceased Sasquatch had been their former teammate, Walter Langkowski, in a mutated form, they held a memorial service for the respected and beloved hero. Unable to handle the guilt he felt, Jared flipped during the funeral and angrily exclaimed that the mindless Sasquatch shouldn’t have been part of Alpha Flight to begin with. Before his teammates could respond to that, Radius told everyone to leave him alone. [Alpha Flight (2nd series) #14]

In the following weeks, Radius seemed to punish himself for what had happened. He kept running training scenarios beyond the point of exhaustion and during missions he seemed to have a suicide wish, taking unnecessary risks. [Alpha Flight (2nd series) #15-18]

Jared would have wound up dead sooner or later, if not for the original Alpha Flight – including Sasquatch – reuniting and confronting the new team. 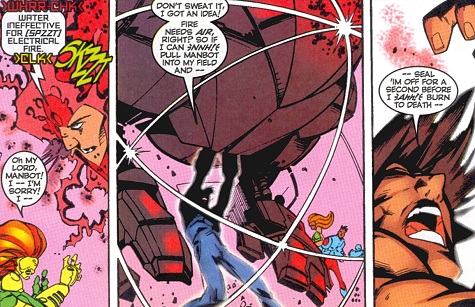 Face to face with the hero whose death he believed to have had on his conscience, Radius came to terms with his actions. When Manbot was later in danger of being consumed by an electrical fire within his systems, Radius saved his teammate by pulling him inside his force-field, thus extinguishing the fire by lack of oxygen. As he had risked his own life in the process, Jared redeemed himself in his teammates’ eyes. [Alpha Flight (2nd series) #19-20]

However, with the original Alphans back in the fold, it was decided that Department H had enough operatives for two hero teams. All of the newer, lesser experienced members were stood down to Beta Flight and Radius was not fond of this decision. [Wolverine (2nd series) #142] Maybe that’s the reason why Jared joined the X-Corps, a paramilitary mutant police force created by Banshee, a few weeks later. The X-Corps consisted of both volunteers and criminals who were forced into working alongside them through telepathic coercion. [Uncanny X-Men #401]

When the X-Corps were visited by the X-Men, Radius got to meet their latest member, Stacy X. Prior to joining the X-Men, the young woman had worked in a brothel and used her pheromone control on the customers to give them pleasure. Unable to experience physical touch or sexual intercourse because of his force-field, Jared hired Stacy X for 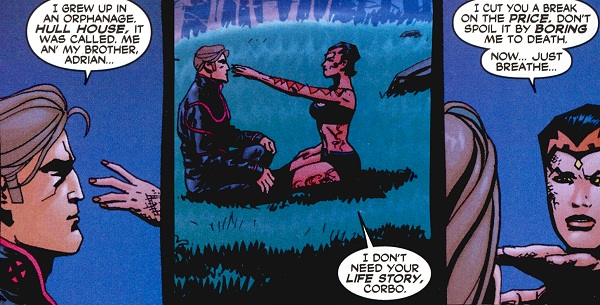 her services. They hoped that her pheromones could penetrate his force-field, but their experiment was interrupted when the villains were freed from the mind-control and took apart the X-Corps from within. Radius was buried alive by a quite annoyed Avalanche. [Uncanny X-Men #403, 405]

Fortunately, Radius’ forcefield kept him alive but his career as a super-hero ended rather abruptly nonetheless. A couple of weeks later, he was among the thousands of mutants worldwide to be de-powered after M-Day. [New Avengers #18] Maybe the loss of his powers is a blessing in disguise, though. Not only is Jared now able to fully experience human contact but, given that his father, Unus, died from asphyxiation when he could no longer control his force-field, Radius has been spared such a possible fate. On the other hand, this incident also took away his chance to get to know his father. At least Unus left behind another relative that Jared might want to get in touch with. Also gifted with a force-field power, Camella Unuscione has been long rumored to be Unus’ younger sister or daughter. However, his current activities and whereabouts are unknown.