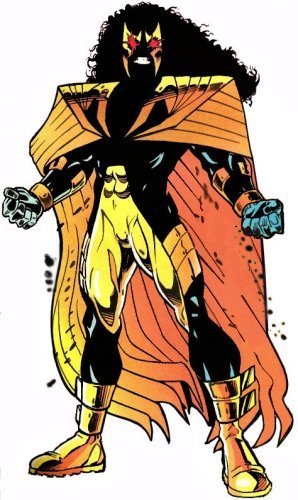 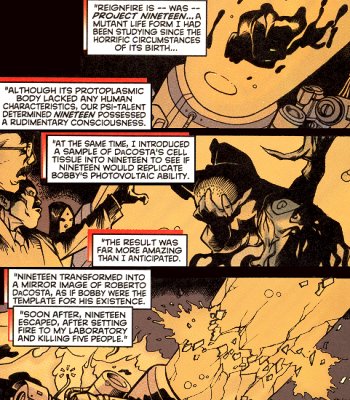 The mutant who would eventually be known as Reignfire was born as a blob of protoplasmic goo that both lacked a traditional, corporal form and had a degenerative cellular condition. It was determined via telepathy, however, that this being did in fact possess a rudimentary consciousness. Dr. Segismund Joshua from the Damocles Foundation decided to keep this anomalous mutant goo alive. Dubbing him "Project Nineteen," Dr. Joshua grew him in a cytoplasm that sustained his life. Nineteen spent the first decade of his life this way. Fortune struck both for Nineteen and Dr. Joshua when Joshua was hired to experiment on the mutant superhero Roberto da Costa, aka Sunspot. Unbeknownst to his employer, Gideon, Dr. Joshua took this opportunity to extract some cellular samples from Sunspot. He injected Sunspot's genetic material into Project Nineteen in order to give the formless young mutant a genetic template he could use to grow. The experiment worked—far better than Dr. Joshua anticipated. Not only did Nineteen begin to take the form of a human, it also emulated the Sunspot's powers. Nineteen grew up quite quickly and soon attained adult form. [X-Force (1st series) #79-80, X-Force (1st series) #12-15]

Once he reached maturity, Project Nineteen broke free from his containment chamber, slaughtered five of the organization's scientists and escaped. He emerged, months later, as leader of the floundering Mutant Liberation Front and adopted the name Reignfire. [X-Force (1st series) #79-80] 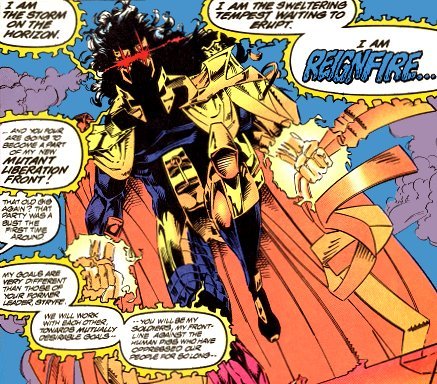 Intent on avenging the perceived wrongs that had been done to him because he was a mutant, Reignfire lifted the disjointed mutant terrorist organization from the disarray into which it had landed and recruited new members to its dwindling ranks. One of his first recruits was Dani Moonster, a former New Mutant who had recently been expelled from Asgard. Because of his physical similarity to Sunspot and the memories they shared, Reignfire tricked Moonster into believing he was actually Sunspot gone rogue, and used this belief to keep the otherwise benevolent Moonstar under his control. Another of his early recruits was the teleporting mutant woman Locus. With their help, Reignfire freed the rest of the MLF's former members, all of whom were in captivity: Wildside, Reaper, Forearm and Tempo. [X-Force (1st series) #26]

Reignfire's first point of order as the leader of the new MLF was to stop Project: Wideawake—a deadly anti-mutant Sentinel program sponsored by the United States government—by eliminating its leader, Henry Peter Gyrich. Reignfire and the MLF kidnapped this prominent government official and prepared to kill him. Unfortunately for Reignfire, the mutant team X-Force, whose ranks included his genetic progenitor Sunspot, intervened and tried to save Gyrich's life. In the ensuing battle, Reignfire lost his soldier Tempo to defection, but convinced X-Force's Feral to join his ranks. As the battle progressed, Reignfire realized he had to cut his losses and escape. He dropped Gyrich from the sky and ordered Locus and Moonstar to execute him as he fell. Unfortunately, Sunspot intercepted these attacks and saved Gyrich's life—at the cost of creating a spatial feedback distortion that shunted both him and Locus to parts unknown. Reignfire, his mission having failed, fled with the remnants of the MLF. [X-Force (1st series) #27-28] 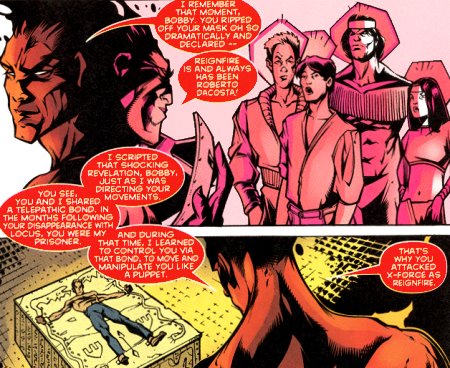 However, this failure had a perk: Reignfire was able to retrieve Sunspot from the time-space continuum and make him his prisoner. He held Sunspot captive for months and, thanks to the genetic bond they shared, was able to brainwash and enslave the young mutant. Reignfire successfully manipulated Sunspot into believing he was actually Reignfire. He then set the brainwashed Sunspot loose on the world, all the while controlling him via their telepathic bond. This allowed Reignfire to accomplish his dangerous missions without any bodily risk to himself. [X-Force (1st series) #79-80] 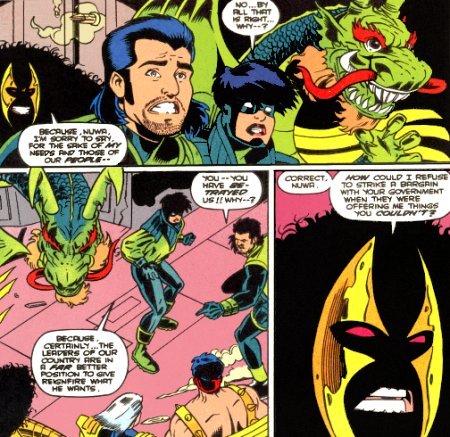 Although he led the Mutant Liberation Front, a terrorist organization dedicated to freeing mutants from oppression by whatever means necessary, Reignfire only used this group to further his own personal agenda, which did not necessarily include securing the rights of his people. For instance, when a group of mutant Chinese freedom-fighters known as 3Peace contacted the MLF for help in freeing the oppressed mutants of China, Reignfire accepted the offer. However, as the mission progressed, he received a much better offer, the terms of which are unknown, from the Chinese government to work for them instead. Reignfire shifted allegiances without any compunction in doing so and betrayed 3Peace to the Chinese government. [X-Force Annual (1st series) #3]

For some reason, perhaps because he had outgrown their usefulness to him, Reignfire decided to sever his ties with the MLF. He did not do so peacefully. Once again using Sunspot as his puppet, he brutalized the MLF, defeating Wildside, Feral and Forearm with ease. Moonstar proved to be a much more formidable opponent, prompting Reignfire to slaughter her beloved Asgardian steed, Blackwind. When X-Force and Locus arrived to save Moonstar, Reignfire manipulated Sunspot into confronting the team and had him reveal himself as Reignfire. X-Force was astounded at the revelation, which they would later discover to be faulty. [X-Force (3rd series) #43]

Unfortunately for Reignfire, at this same moment, reality transformed into the one known as the Age of Apocalypse and, in its aftermath, the mutant Cable psychically healed the mentally wounded Sunspot. Believing he was purging Sunspot of an alternate personality, in reality Cable simply severed the psychic link Sunspot and Reignfire shared. [X-Men: Prime, X-Force (1st series) #44] 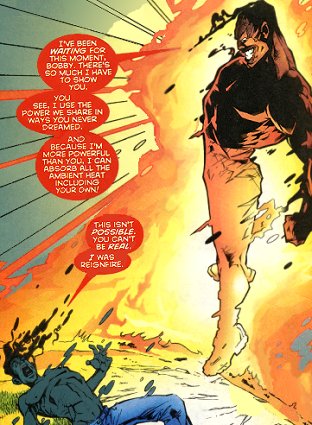 The resulting psychic trauma rendered Reignfire inert. He lost consciousness for several months and emerged confused, wounded and disoriented. Vowing revenge on his genetic template, Reignfire set about ruining Sunspot's life. Because he shared all of Sunspot's memories and knowledge, he managed to do so with minimal effort. After recruiting the help of his former associate Locus, Reignfire blocked Roberto's access to all of his financial accounts with his corporation, Da Costa Industries. Then, he went about murdering board members and shareholders of the company, quickly bringing it to ruin. Those who complied with his demands, however, he let live.

Reignfire also tried to implicate the road-tripping X-Force in a series of murders by slaughtering various people they encountered as they traveled across the country. He murdered a waitress they met in Ohio, burned a hotel they stayed at in Chicago, killed some mobsters attacking their employer Richie in Missouri and, finally, incinerated one of Sunspot's new friends on a soccer field in Boulder, Colorado as da Costa watched in horror. Roberto was shocked when Reignfire revealed himself, having believed that he had always been Reignfire. [X-Force (1st series) #71-78] 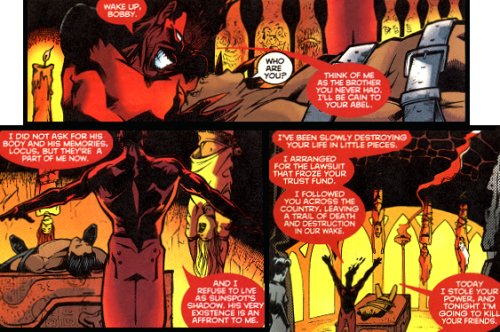 After absorbing all of Sunspot's power, Reignfire took him and the rest of X-Force captive—except for Proudstar, who eluded him and Locus. He imprisoned them in a chamber beneath a Las Vegas casino and prepared to kill them. Were it not for Proudstar's intervention, he might have succeeded.

However, X-Force broke loose and battled Reignfire in the streets. Although he overpowered them, Reignfire's life fell into jeopardy at hands of his creator, Dr. Joshua, who had arrived with a discorporating gun in tow. Reignfire fought back and scorched Dr. Joshua, at which point 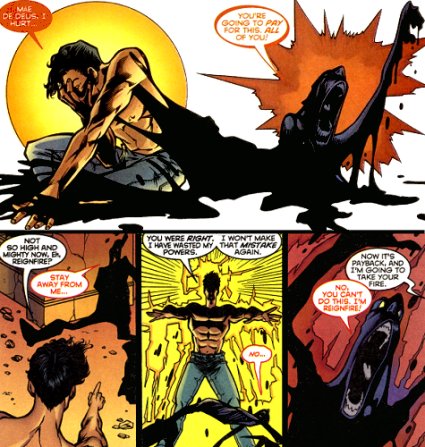 Sunspot picked up the gun and used it to disintegrate Reignfire's corporal form. Now lacking a body once again, Reignfire quickly found a new and perfect host: Sunspot. He merged with Sunspot, courtesy of their genetic and psychic bond, and took control of his body. Unfortunately for Reignfire, the rest of X-Force fought back and separated Reignfire from Roberto. Reignfire's energy was then sucked out of the remnants of his body by Roberto. His withered remains were taken into custody by men who claimed to be agents of S.H.I.E.L.D. [X-Force (1st series) #78-80]

As it turned out, the men who claimed to be S.H.I.E.L.D. agents were not entirely honest, as they actually worked for the Damocles Foundation. They placed Reignfire's remaining tissue in stasis. They planned to use it to animate a Celestial Gatherer and harness its cosmic abilities. To prevent the Reignfire entity from once again acting out of their control, the Foundation scientists and Dr. Joshua neutralized its higher cognitive abilities, making Project Nineteen their slave to control. Fortunately, for the sake of the world, Sunspot and Selene joined forces to prevent Reignfire's second ascension. Although he began to ascend, Moonstar and her ally, Arcadia Deville, destroyed the Reignfire-powered Celestial Gatherer, thus putting an end to Reignfire's legacy once and for all. [X-Force (1st series) #95-98]