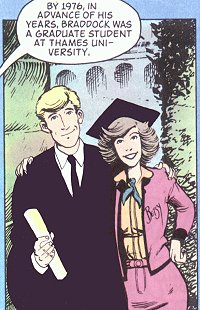 Brian Braddock grew up in Malden, England, the son of well-to-do academic parents. Leading a normal, if somewhat secluded and privileged life, Brian and his siblings were unaware of the fact that their father actually came from another dimension called Otherworld. Brian was the quieter and more studious brother to the much older, flamboyant, racing-car driver Jamie and his equally flamboyant tomboy twin sister, Betsy. Highly intelligent, Brian, was a graduate physics student at London Thames University, ahead of his age.

While visiting home when he was 21, he met a young woman named Valerie in the pub. He stayed outside his home, 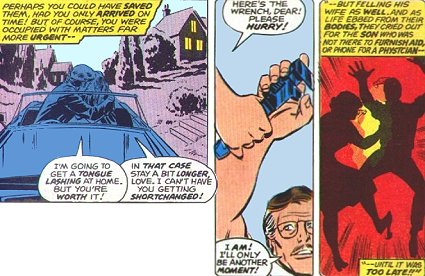 Braddock Manor, with her in the car, not caring that his parents were probably waiting up for him inside. Suddenly, there was an explosion inside the building and he learned that his parents had died, electrocuted in what appeared to be a freak accident with the computer Professor Braddock had built. Brian blamed himself for his parents’ death and became even more of a loner. [Captain Britain (1st series) #14] 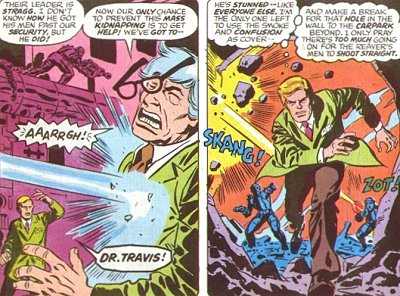 To combat the loneliness, he took on a job as assistant at Darkmoor Research Center, a top secret nuclear complex in the moors, during university break. Said complex was attacked by Joshua Stragg aka the Reaver, and his men who wanted the to kidnap the top nuclear scientists gathered there. Brian made a break for it on his motorbike, hoping to get help. Stragg’s men followed him and a confused Brian drove off the cliffs. The fall should have killed the young man. Instead, the badly hurt Brian was called by strange voices.

Welcoming him were the ghostly forms of an unnamed old man and a young woman, who called herself the Lady of the 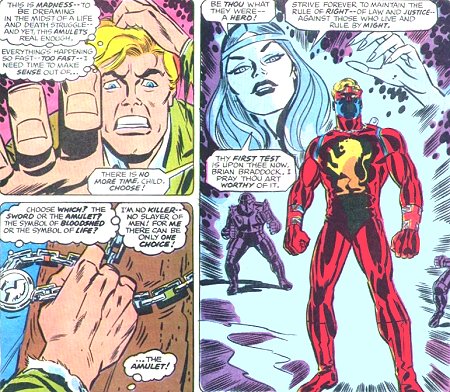 Northern Skies. They offered Brian the choice to become a hero and beckoned him to choose between two objects embedded in stones on peril of his mortal soul: The Sword of Might or the Amulet of Right. With Stragg and his men closing in on him, Brian had to choose fast. Instinctively, he chose right. He was a scholar, not a killer, and so he chose the amulet and was transformed into Captain Britain, a champion. He was also given a weapon, his quarterstaff. Nudged by dark forces he wasn’t aware of - the Nethergods - and which would later vex the Captain - Stragg grabbed the sword and was given powers as well. The newly-transformed Captain Britain succeeded in his first test though and beat his foe. [Captain Britain (1st series) #1-2, Hulk Comic #32] 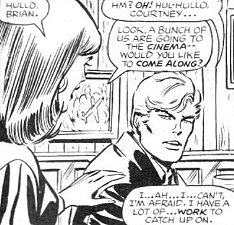 Brian Braddock returned to his life in London at university, where college beauty Courtney Ross was vying for Brian’s affection much to the chagrin of fellow student, Jacko Tanner, who strongly disliked Brian and considered him a weakling.

Brian began his crimefighting career as Captain Britain in earnest. He foiled a bank robbery by the henchmen of the elusive crimelord, Vixen, and battled the dangerous failed scientist-turned supervillain Hurricane (another unwitting pawn of the Nethergods, who had caused the accident that gave Hurricane powers) for the fate of London. 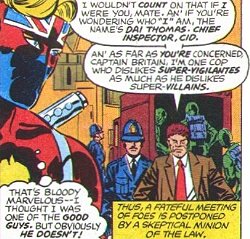 During those adventures, he also made an enemy of Scotland Yard Chief Inspector Dai Thomas. Thomas harbored an irrational hatred for superheroes, as his wife had died as a bystander of a battle between superbeings in the USA. He resented Captain Britain, as he saw him as a symbol for that “American madness” now infecting Britain as well. As a result, Captain Britain’s relationship with the police had its difficulties and he was often on the run from the authorities. [Captain Britain (1st series) #3-7, Hulk Comic #32]

One day, Brian was visited by his agitated twin sister, Betsy, who asked him to return to Braddock Manor with her, as there had been an attempt on the life of their elder brother, Jamie. As they flew to Malden in Betsy’s private plane, the young woman suddenly found herself under psychic attack, seeing monsters everywhere and Brian had to save them. Moments later, he was attacked by a strange rider with psychic powers, who made him live through nightmarish hallucinations. Brian fought his way free and was found by

Jamie, who explained that the villain named Lord Synne, who had psychic powers, was trying to kill him and already had the neighboring villages under control. Having Betsy under his control, the villain used her to strike out at the brothers. To save his brother’s life, Brian revealed himself as Captain Britain and stopped Betsy from killing Jamie. [Captain Britain (1st series) #8-10] 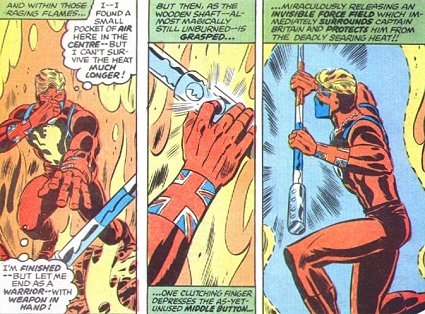 The brothers brought Betsy to a clinic to recover from her possession and Brian left for the countryside to face Synne as Captain Britain, but the telepathic villain sicced the villagers he possessed on Captain Britain, who would have burned to death if he hadn’t learned in the process that his quarterstaff - given to him with his uniform - was capable of projecting a forcefield.

He faced Synne again and this time won, not so much because of what he did, but because the source of Synne’s powers, the Braddocks’ secret computer, was briefly shut off by the charwoman Emma Collins, who was cleaning the laboratory. [Captain Britain (1st series) #11-13]

Captain Britain followed the trail back to the computer his father had built and, when he confronted the computer, he learned that it was sentient and had murdered his parents deliberately. The computer taunted him with holographic images about his own role in his parents’ death (as he had spent his time with Valerie, instead of returning home) but Brian got over his feelings of self-recrimination and managed to beat the Computer’s physical manifestation - a solid hologram calling itself Mastermind. [Captain Britain (1st series) #14-15]