BIOGRAPHY - Page 1
Doug Ramsey was a normal teenager living in the small community of Salem Center, New York. It was there that he met Kitty Pryde in a dance class at Stevie Hunter’s studio. Doug and Kitty connected over their shared love for computers, video games and the challenges of “hacking”. [Uncanny X-Men #177] The two became fast friends and Doug provided support to Kitty as she dealt with her parents’ divorce and the changes in her close relationship with her teammate, Ororo Munroe. They became so close, that Kitty worried that their friendship might develop into something more and complicate her blossoming romance with Piotr Rasputin. 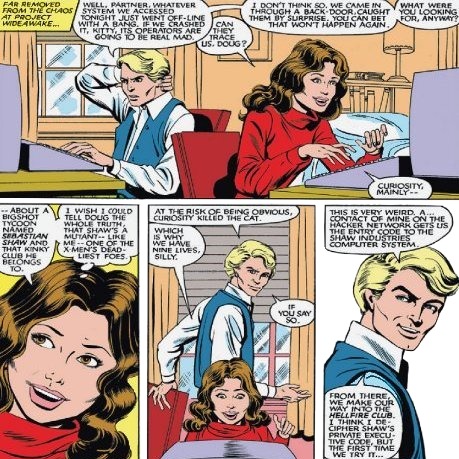 Unbeknownst to Doug, Kitty was a mutant and a member of the X-Men. Doug was also unaware that he himself was a mutant with an intuitive talent for languages that enhanced his own natural skills with computer programming. Recognizing Doug’s talent (but unaware at first that he was a mutant), Kitty sought Doug’s help in hacking into the personal systems of the Hellfire Club’s leader, Sebastian Shaw. To Kitty’s surprise, this led them into a database maintained by Project: Wideawake. They inadvertently seized control of a Sentinel and tipped the Project’s senior staff to their presence. This included Sebastian Shaw himself. Wideawake’s director, Henry Peter Gyrich ordered a trace on whoever managed to break into their systems. [New Mutants (1st series) #13]

Shortly after this incident, Doug visited Kitty at Xavier’s School for Gifted Youngsters to share some exciting news: he had just been offered a full scholarship to the exclusive Massachusetts Academy. Kitty had briefly been a student there but broke her ties to the campus when she realized that it was a front for the nefarious Hellfire Club and run by their White Queen, Emma Frost. Doug asked Kitty to accompany him on the all-expense paid campus visit that had been arranged for him. Concerned for Doug’s safety, Kitty requested permission from Professor X to join him. It was then that Xavier revealed to Kitty that Doug was a mutant with a linguistic-based power and wondered if the Hellfire Club was aware of this. Kitty was surprised and wanted to tell Doug but Xavier convinced her that given the passive nature of Doug’s mutation, it was best that he be allowed to live a normal life.

Xavier and Storm agreed to Kitty’s request to join Doug on his campus visit. At the time, the X-Men believed that the Hellfire Club was in disarray and that Emma Frost was still comatose. With this knowledge, they felt confident that Kitty and Doug would be safe, especially with Xavier telepathically monitoring Kitty’s thoughts throughout their trip. Things did not go as planned due in large part to the X-Men’s sudden disappearance (thanks to the alien Beyonder). The White 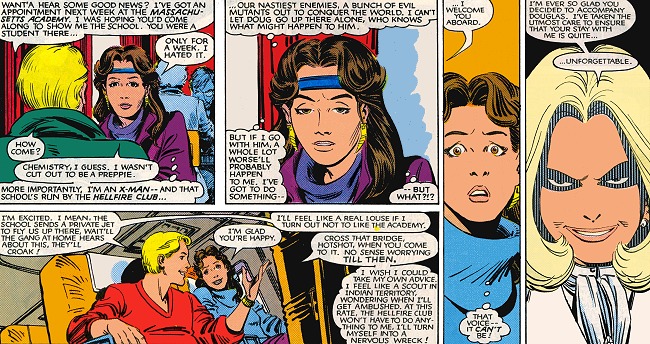 Queen had recovered from her comatose state and greeted Doug and Kitty personally. Doug’s scholarship had been a ruse to lure Kitty back to the Academy. She ended up a captive of the White Queen but she and Doug were eventually rescued by the New Mutants. During all this, Doug was under the mental domination of the White Queen and unaware of the true motivation for his visit or what transpired. [Uncanny X-Men #180, New Mutants (1st series) #15-17]

Doug’s life changed dramatically on the night that the young alien called Warlock arrived on Earth. The frightened young Technarch crashed near Xavier’s school, drawn to the power emitted by the mansion’s Shi’ar technologies. The New Mutants briefly fought Warlock before realizing that 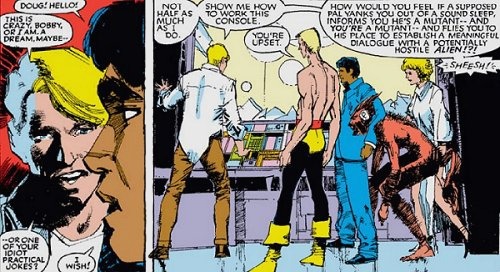 they needed a means of communicating with him. Cannonball remembered that Doug was a mutant with a gift for languages and brought him to the mansion to help. This was how Doug learned that he was a mutant. Despite being overwhelmed by the revelation, Doug successfully used the Danger Room’s computers to communicate with Warlock. [New Mutants (1st series) #21]

Doug soon joined Xavier’s School for Gifted Youngsters and the New Mutants. He marveled at the team’s adventures and on occasion, his linguistic talent helped to save the day. For example, when a handful of New Mutants encountered Professor X’s mad son Legion, it was Cypher’s linguistic ability that helped them communicate with David’s disparate personalities. [New Mutants (1st series) #25-27] 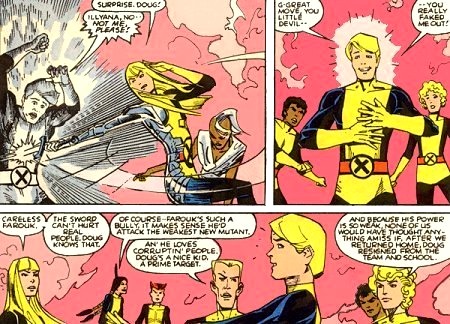 But for every time that his passive powers proved valuable, there were multiple where he was vulnerable and in harm’s way. Doug longed to be an active part of the team but realized from the moment he joined that he was the team’s weak link. The New Mutants’ foes realized it as well. When the malevolent psychic being Amahl Farouk was defeated by the New Mutants, he possessed Doug thinking that no one would notice if he left the school soon after. Doug was freed from the Shadow King’s influence but this encounter merely reinforced his belief that he was worthless to his teammates. [New Mutants (1st series) #34]

Doug’s feelings of inadequacy were reinforced once more when the team was abducted by the Asgardian Enchantress. While trying to escape the Enchantress’ clutches Magik’s teleportation spell scattered the New Mutants throughout Asgard. Doug found himself in a mead hall where he proved unable to defend himself against the superhumanly strong Asgardians. He was enslaved by the owner of the establishment and forced to work as kitchen help. He was rescued by 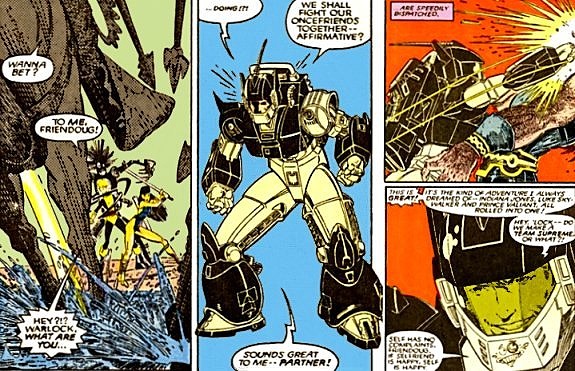 Warlock and together they searched Asgard to try and reunite their team. It was during this adventure that Warlock and Cypher first joined together in battle, with Warlock forming a protective armor around Doug that allowed him to more fully participate in combat. Dubbing them the “Team Supreme”, this partnership helped fulfill Doug’s desire to pull his weight with the team and join in their adventures. [New Mutants Special Edition #1]

It was also during the New Mutants’ exploits in Asgard that Warlock first merged his techno-organic form with Doug. After sustaining life-threatening damage, Warlock was in dire need of “lifeglow.” To Warlock’s surprise, Cypher selflessly offered a portion of his own to tide Warlock over. It allowed the pair to reunite with their teammates and the X-Men but the dangerous tactic of merging their forms would prove to have lasting and unforeseen effects on Doug’s physiology. [X-Men Annual #9] 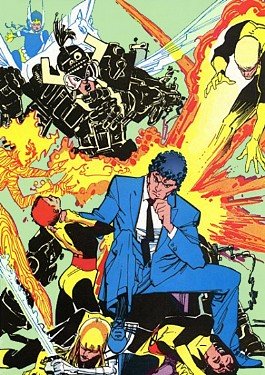 When the New Mutants returned to Earth, they found that Professor Xavier was gone and in his place as headmaster was the X-Men’s perennial foe, Magneto. Magneto immediately set to assessing the New Mutants’ abilities. However, in their first training session in the Danger Room, Magneto told Cypher that there was no need for him to participate. This infuriated Doug who felt that he had finally earned his spot on the team and needed to learn how to handle himself in combat situations. Magneto realized his mistake with Doug almost immediately but had little chance to make amends as a far greater threat was looming. [New Mutants (1st series) #35]

The infinitely powerful Beyonder offered the team salvation in exchange for becoming his followers. The team ultimately rejected his offer. When the Beyonder returned, he came to seek revenge. The New Mutants fought valiantly but were slain, one by one.

Shortly thereafter, the Beyonder resurrected Cypher and the entire team to demonstrate his vast powers. A side effect of the New Mutants‘ resurrection was a zombie-like malaise that plagued all but Mirage and Warlock. 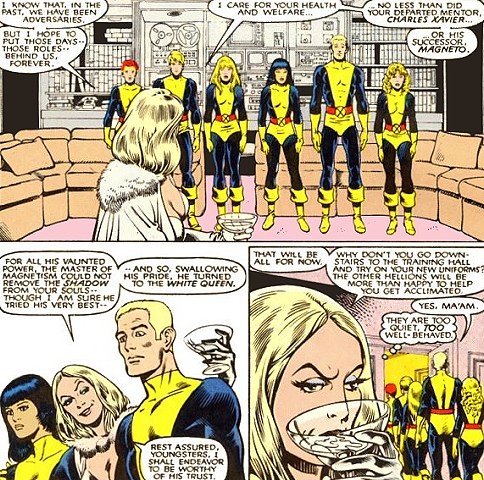 Unable to help his students, Magneto was coerced into transferring the team to the White Queen’s Massachusetts Academy. Only Warlock and Mirage remained at Xavier’s. Magneto soon realized that he had been manipulated by the White Queen and her pupil Empath. Together, he and Warlock went to retrieve the New Mutants and faced opposition in the form of the Avengers. Seeing Magneto’s efforts on their behalf, the New Mutants came to Magneto’s aid and were reunited at Xavier’s School. [New Mutants (1st series) #36-40]