Shortly after Laynia's funeral, a new Darkstar appeared among the Winter Guard, wearing her classic costume and wielding the Darkforce. The Russian government saw value in the public reputation established by the heroic Darkstar and devised a means of infusing Laynia's DNA with genetically compatible candidates to create viable replacements.

This process imbued the subject with a facsimile of Laynia's Darkforce powers which they were able to wield in conjunction with her original amulet. The amulet strengthened the replacement's connection with the Darkforce aspect of Laynia's lifeforce, which apparently did not perish when Laynia was killed by Fantomex. 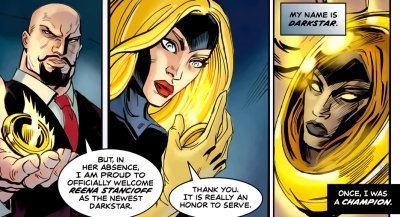 The first candidate to take up the mantle of Darkstar was Sasha Roerich. Sasha found herself tormented by memories belonging to Laynia. When Sasha died in battle trying to fully harness the Darkforce, she was quickly replaced by Reena Stancioff, who was christened as the third Darkstar by the Russians. Like her predecessor, Reena was given Laynia's power amulet which houses remnants of the original Darkstar's psyche. [Hulk #1, Hulk: Winter Guard]

Laynia made a brief return to the land of the living - sort of - when the X-Men's foe Selene used her power to resurrect many mutants and infuse them with a version of the techno-organic virus during her quest to become a true goddess. Darkstar was among Selene’s army of the living dead and part of the attack force sent to Utopia. There, she encountered Iceman, who was forced to battle the woman he once cared for. Selene‘s plot was foiled and while some of the resurrected mutants managed to escape returning to death once again, Laynia was not one of them. [“Necrosha”]

Reena Stanicoff was doing a commendable job as the third Darkstar, despite her own insecurities. But when Fantasma mysteriously returned to Earth from Limbo, Vanguard and the surviving members of the Protectorate followed her. It was discovered that Fantasma was actually a Dire Wraith. The Citadel, headquarters of the Winter Guard, was a former Dire Wraith stronghold and deep in its catacombs were Dire Wraith eggs, which Fantasma intended to hatch. To complicate matters, the Presence was being kept captive at the Citadel and thanks to Fantasma escaped his cell. Although Vanguard despised Reena, the Protectorate and Winter Guard were forced to unite to battle the Dire Wraith hatchlings and the Presence. Tragically, Reena was killed by a Dire Wraith, who then took over her body to enhance its power. 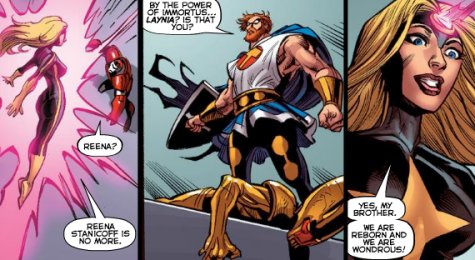 However, Immortus proved to be true to his word and before the Darkforce-wielding Dire Wraith was able to cause more trouble for the heroes, Immortus’ vast power combined with Darkstar’s original cameo gem, transformed the Dire Wraith/Darkstar hybrid into the original Darkstar. Through these twisting circumstances, Laynia was truly restored to life. The remaining Wraiths and the Presence were defeated by Darkstar and the others. In the wake of this battle, Laynia and most of the others regrouped to take up the mantle of the Winter Guard. Once more, the original Darkstar took on the role of Russia’s most dedicated and heroic champions. [Darkstar & the Winter Guard #1-3] 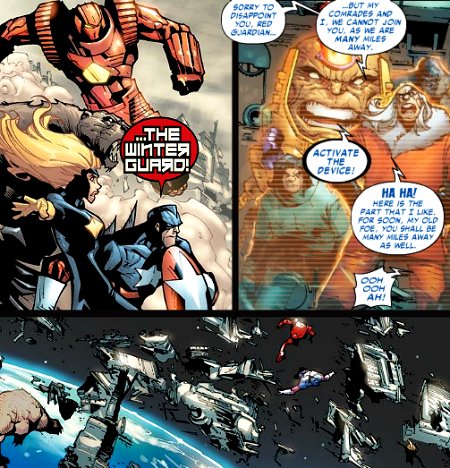 Darkstar and the Winter Guard soon tracked down Russian criminal the Red Ghost at an abandoned factory in Promyshlennyi, where he was working with several other criminals to develop a very powerful weapon. This villainous conclave planned to test the device in 48 hours. However, with the arrival of Darkstar and her teammates, they tested it much sooner. The Winter Guard barely had time to realize that their foe was in another location entirely before the weapon was directed at them and blasted them into space. Laynia and the others appeared to have met their demise. [Amazing Spider-Man (1st series) #676]

Darkstar and the Winter Guard somehow survived being blasted into space, but soon fell victim to another assault when the Descendants released a nano-mist which started to infect humans, transforming them into Descendants also. Darkstar and her teammates were among those affected but the infection was later reversed. [Secret Avengers (1st series) #35]