BIOGRAPHY - Page 3
In the aftermath of the Sorcerer War, Alpha was being reconsidered for full-time employment and support by the Canadian government. Their military liaison, General Clarke, approached Jeffries about a technical problem 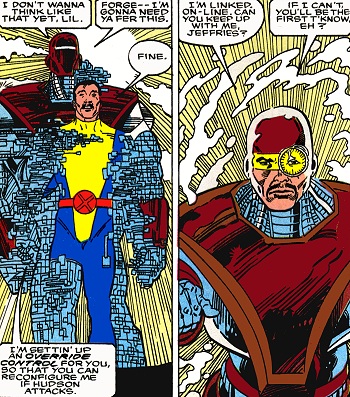 that had arisen with their collaborator, Roxxon Oil. A mechanical experiment had reportedly gone haywire at a Denver, Colorado facility, causing machinery to come to life and attack the facility employees. Box was an ideal specialist to call in for the situation and Diamond Lil insisted on coming along for the ride to keep Madison company. Seeking further assistance, Box and Lil flew to Muir Island where they recruited the mutant technologist Forge. In an ultra-advanced version of his previous partnership with Roger Bochs, Mr. Jeffries planned on cybernetically combining Forge’s intuitive gift for cognitive invention with his own technoforming mass to counter anything that was thrown at them. They returned to Denver just in time to witness the entire facility explode outwards from the core. This blast exposed the man at the center of all their problems: James MacDonald Hudson. [Alpha Flight (1st series) #87-88]

Confronting their Roxxon “patrons,” Box and the others learned Roxxon had been holding Hudson prisoner for the last two years, in a comatose state inside the Denver facility’s sub-basements. The “mechanical difficulties” they were experiencing only started once Hudson’s new cybernetic components integrated his will into the cyberweb enough to fight back against his captors. Once it became clear Hudson’s presence would be uncovered before Jeffries solved the problem, Roxxon attempted to sanction Hudson before the heroes learned of him, which led to the facility’s explosion as Hudson’s mechanical side countered their

attack. Box and Forge managed to penetrate Hudson’s remaining defenses and Jeffries appealed to Jamie’s humanity, telling him about all Heather and Alpha Flight had done in his absence. Hudson’s organic brain came back to awareness, restraining his mechanical half and disconnected from Roxxon’s hub to return to Canada with Box and Diamond Lil. [Alpha Flight (1st series) #89-90] With Mac effectively back from the dead, whatever remained of Jeffries’ relationship with Heather quietly ended, as he proceeded with his relationship with Lillian and Heather tried to discover where she stood with Mac.

Alpha Flight returning to their governmentally sanctioned status, and Box and Diamond Lil were both picked for the new roster, despite Lil having discovered a growing lump in her left breast. Madison stood by her as she dealt with the potential diagnosis of breast cancer and the complications her diamond hard skin would pose to any life-saving surgeries. As it were, the doctors could not even perform as biopsy of the lump, as nothing could penetrate Lil’s skin. [Alpha Flight (1st series) #95, 97] 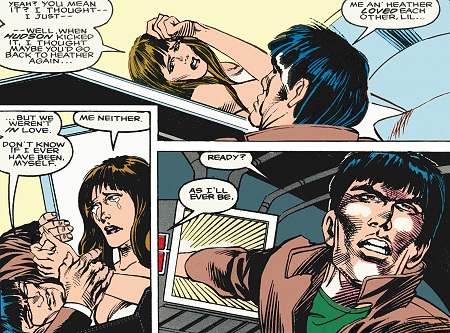 A couple of weeks later, James Hudson sacrificed himself in order to save an alien race from Galactus. Lillian was concerned that Madison would go back to Heather again but he assured her that he and Heather were done regardless. After they recovered an alien weapon from the invasion of Toronto that was able to penetrate Lil’ skin, Madison helped to construct it into a surgical instrument that managed to take a biopsy of Lil’s lump, which happily proved to be benign. [Alpha Flight (1st series) #101]

On a covert mission to South America, Box and Diamond Lil were shot down by enemy forces and Jeffries was seriously injured. Faced with their own mortality on the battle field (as well as one of Diablo’s lethal Fire Elementals), Madison confessed the fullest extent of his love for Lil and asked her to marry him if they managed to get out of the jungle alive. She accepted and the rush gave Madison the push he needed to reform his scrapped Box armor into a 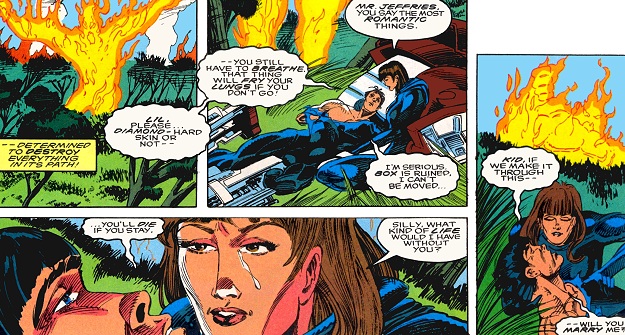 vehicle to save them. [Alpha Flight (1st series) #102-103] After getting medical attention back in Toronto, Jeffries and Lil were true to their vows and resigned from active duty on Alpha Flight to plan their wedding. As their former Gamma Flight teammate, Wild Child, had recently received psychiatric and drug therapy to rejoin the team as Weapon Omega, Madison asked him to stand up as his best man at the wedding. [Alpha Flight (1st series) #104-105]

Jeffries had trouble letting go of the super-hero life after they were married, however. He insisted on bringing Lil back early from their honeymoon to respond to the general call for heroes during the Infinity War affair, much to her intense displeasure. 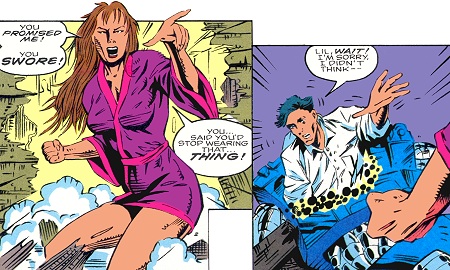 Box was also present when the artificial killing machine known as Death Metal made his way to Canada. Having absorbed a pure spirit, Death Metal was fighting his violent urges. However, as he was unable to communicate his plight, Death Metal provoked a fight with Alpha Flight, 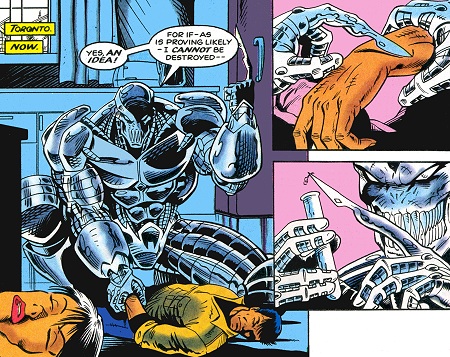 hoping they would be able to destroy him. During the battle, Box was hit and, feeling the physical pain of the attack, Madison phased out of the armor. Using his transmutative power on Death Metal’s metallic hide, Madison managed to injure him like nobody else before, yet Death Metal’s partial mystic origin prevented Jeffries from gaining full control over him. [Death Metal #1-2] Death Metal fled, yet returned one week later and tracked down Madison to his home. Knocking out both Lillian and Madison, Death Metal took a cell sample from Madison, intending to create a being that could either kill or detain him. In Vesper of the group Genetix, Death Metal found a female mutant who could also mentally control technology. After combining her DNA with that of Madison, Death Metal injected it into the reproductive tract of empath Krista Marwan, who sensed the direness of the situation and vowed to carry the child to term. [Death Metal vs. Genetix #1-2] Apparently, Madison never learned about any of this, though.

Shortly thereafter, Canada issued a registration act for super-powered individuals and a clampdown on all superhuman activities in their boundaries. As a result, Alpha Flight had to temporarily disband. When Department H re-opened the Flight program several months later, they sent out a call for new and old members to join the new Alpha Flight. Madison accepted over Lil’s objections, though at least he no longer made use of the Box armor, probably out of respect for his wife’s wishes. The Box armor was instead merged with an operative named Bernie Lechenay, who also joined Alpha Flight as Manbot. [Alpha Flight (2nd series) #5] On their first mission as a team, the new Alpha confronted a terrorist group of Quebec separatists allied with the super-villains, Zodiac. Jeffries did his best to encourage the new kids on the team, particularly the inexperienced Flex. Unfortunately, the team’s leadership disputes and lack of experience left Jeffries vulnerable to a blast by Scorpio, who took Madison hostage as Zodiac teleported away. [Alpha Flight (2nd series) #1] 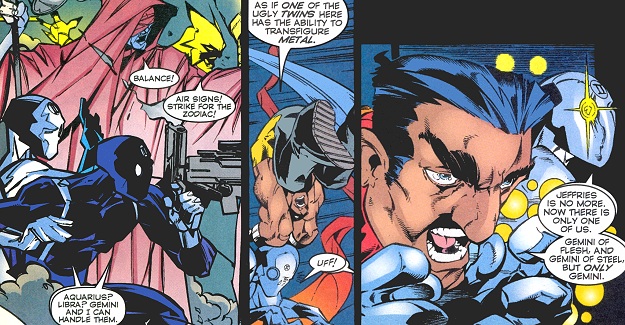 Zodiac brainwashed Jeffries and made him join their group as Gemini. True to his new moniker, Madison created a mechanical twin of himself, and he and his robot duplicate wore identical costumes, one with a white and one with a black mask. Several weeks later, Zodiac infiltrated Department H and battled Alpha Flight again. Seeing one of the Gemini manipulate metal with a mere thought, Puck realized with whom he was fighting and pulled off Madison’s face mask. Alpha Flight was shocked to see their teammate revealed and helplessly watched as he and the rest of Zodiac teleported to safety once more. [Alpha Flight (2nd series) #12]