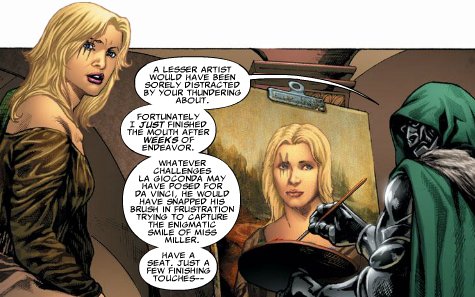 Although the initial causality loop involving her lifespan was now closed, Layla still retained extensive knowledge of “stuff” thanks to her journals. In the service of causality, Layla now began composing these journals nightly, ensuring that she would have the knowledge she already had from reading the journals in the future. While waiting for her own timeline to sync up with X-Factor’s again, Layla made contact with the modern era’s Doctor Doom. She spent a year as his advisor, providing him with the knowledge she had about his future in exchange for certain forms of technical and mystical knowledge Layla knew she would need to have in the months to come. Layla encountered X-Factor again when they were hired to look into the disappearance of the Invisible Woman, caused by an alternate Victor von Doom posing as Reed Richards. In her own cryptic and indirect way, Layla led Madrox and the others to free the real Reed Richards. When X-Factor prepared to return to New York using the teleporting powers of their new member Shatterstar, though, Layla distracted ‘Star at a critical juncture with a kiss, causing his portal to collapse. This left Layla and Shatterstar in Latveria and gruesomely decapitated the evil Richards when his elastic head was caught in the collapsing portal. [X-Factor (1st series) #200-202]

Layla and ‘Star remained in Latveria a short while longer, during which time they “connected” with each other. They returned to X-Factor during Bastion and the Mutant Response Division’s efforts to eliminate all remaining mutant threats. They rescued Theresa from an airport attack and regrouped with the rest of X-Factor back in New York. [X-Factor (1st series) #206] Shortly thereafter, Layla, Jamie and the rest of X-Factor visited Cyclops and the X-Men on Utopia. Layla told Scott about the bitter old cyborg he would become in the future, defending mutantkind to the end, but it did little to deter him. Despite his offer to band together, Layla and X-Factor chose to remain in New York, separate from Utopia. [X-Factor: Nation X #1]
Note: The X-Factor: Nation X one-shot had several continuity inconsistencies with X-Factor’s regular timeline. Nightcrawler’s appearance and Longshot’s reference in #206 to his time with Alison from the one-shot place it clearly before Second Coming, but Layla, Shatterstar and Theresa returned to X-Factor during the events of that crossover.

Layla’s time with von Doom made it more difficult than ever for some members of X-Factor to trust her. What used to be cute and forgivable when she was just a kid was now harder to accept on faith, particularly for Rictor and Monet. Layla and M nearly came to blows more than once when she first returned. [X-Factor (1st series) #207-208]

Nevertheless, Layla continued to be frustratingly helpful – she clued Monet in to a way of avoiding her debt to the villainous Baron Mordo, and used a techno-magical glove provided to her by Doctor Doom to help Thor and X-Factor escape from Hel. [X-Factor (1st series) #207, 212] 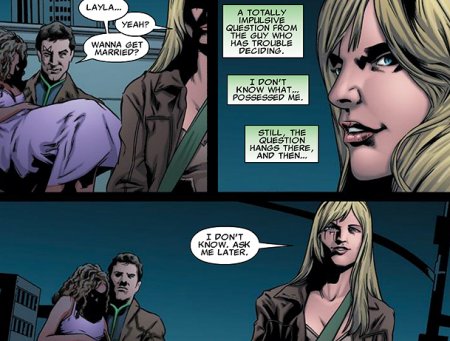 While working a case together, one of Jamie’s wayward dupes began flirting heavily with Layla, and even asked her to marry him, which she accepted. The real Madrox reabsorbed the dupe quickly and embarrassingly tried to talk his way out of the proposal, but Layla had fun playing with her “fiancé.” The teasing got under Jamie’s skin and he finally confronted Layla about jerking them around all the time with the “stuff” she knows. Layla honestly tried to explain that he was better off, and how much she missed having even the illusion of free will when it came to her own choices. She also admitted that Jamie’s proposal was the first time in a year that she’d actually felt happy. That night, they finished the case when Layla exorcised the vandella demon possessing their client, using incantations she learned during her time with Doctor Doom. When it was over, the real Madrox – on the spur of the moment – proposed to Layla “again.” She grinned, but told him she had to think about it, and he should try again later. [X-Factor (1st series) #215] 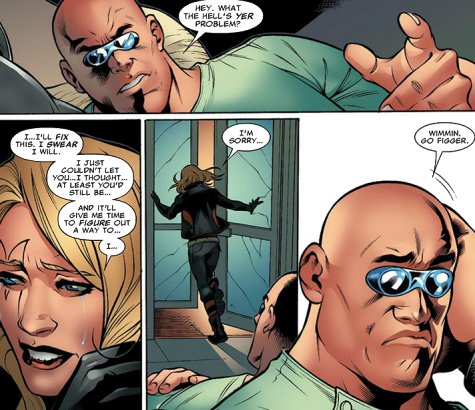 Regardless of her other “duties,” Layla still felt a strong loyalty to her friends. After Wolfsbane tried and failed to convince Rictor he was the father of her baby, Layla had a chat with her. Layla made it very clear that Rahne would face consequences if she tried to screw around with Rictor’s head anymore. [X-Factor (1st series) #216] Layla’s love of her friends was so strong in fact that she tried to change fate for them. When Guido was murdered by the cyber-shooter Ballistique, Layla couldn’t cope with losing him and so she used her powers to resurrect him fully healed, even knowing he’d be without a soul. This was not what was recorded as happening in her journals, but Layla hoped she could change this one thing without there being any real consequences. [X-Factor (1st series) #218-219]

Layla’s mystical knowledge came into play again when X-Factor was besieged by mystical beasts. Wolfsbane’s unborn child, conceived by the wolf-prince Hrimhari, was destined to be of great value and importance to the various realms in the days to come, and so all the canine and feline gods and godlings came out to claim the child, including Bastet, Cerberus and the Fenris Wolf. It was during this fracas that Jamie Madrox first recognized Layla’s hand in Guido’s miraculous recovery. [X-Factor (1st series) #222] 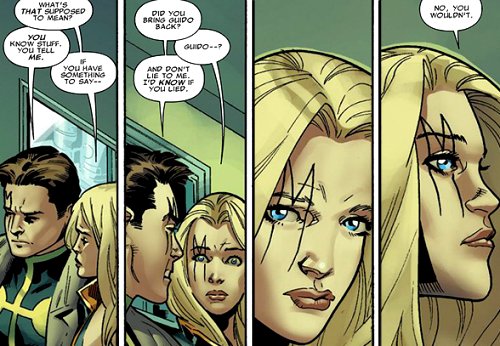 After Layla and Jamie had a chance encounter with a woman named Sally Roland at his old family farm, they were pulled into a murder investigation when she turned up dead days later. At the morgue, Jamie confronted Layla about Guido, and she refused to confess or alleviate his suspicions. A demon named Bloodbath suddenly possessed Sally’s body while they were there and attacked, recognizing Layla as an “acolyte” of some kind. The investigation led them to Imperial Studios in California to rescue Sally’s son from Bloodbath’s clutches. The fight that followed was absolute chaos as one of Jamie’s duplicates was killed, and Guido’s condition was revealed when Bloodbath tried to drain his soul energy and found nothing there. Guido pulverized Bloodbath’s primary host body, and so he jumped into Jamie’s dead dupe. Then, to the shock of everyone present including Layla, he ran Madrox-Prime through with his sword, brutally murdering him.
[X-Factor (1st series) #224.1, 225-227] 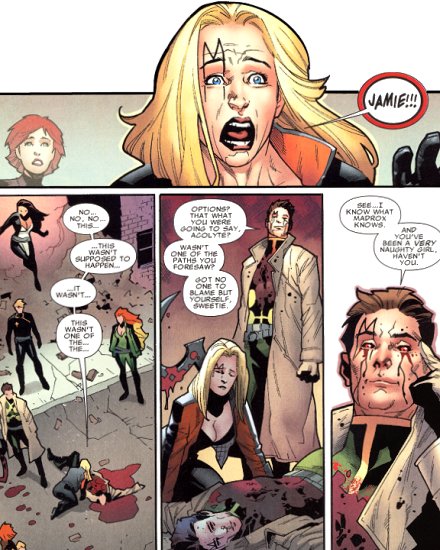 Layla was shocked and horrified by Jamie’s death, as it had not been chronicled in any of her journals. Accusations were thrown about, and Layla admitted to the rest of the team she brought Guido back to life, only without his soul. She was ready to do the same for Madrox, and the team was quickly split over the decision – Banshee told her to do it while M threatened to stop her. The decision became delayed when Bloodbath renewed the fight, but Layla had had enough of him. Using knowledge she had cultivated from her time with Doctor Doom, Layla performed an exorcism of the dead dupe, forcing Bloodbath out. Layla tried reanimating Jamie after that, but it was too late… she had waited too long and her power could no longer do what she wanted. [X-Factor (1st series) #228]

In Layla’s mind, she was being punished for resurrecting Guido. Fate had given her directions to follow, and she ignored them, leading to Jamie’s death. Still, she refused to believe he was gone forever. Whether it came from her inherent knowledge or from nothing more than pure hope, Layla preserved Jamie’s body in case he returned. She had a med student fix up the stab wound that killed him, and kept Madrox’s body stored in dry ice. [X-Factor (1st series) #230] Layla sat 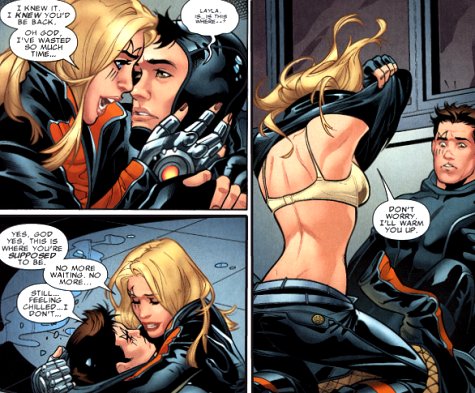 for days keeping vigil over Jamie until, against all logic, he did come back to life. Madrox’s soul had been leaping around between other dimensions and somehow found his way home with the help of another dimension’s Sorcerer Supreme. Layla pulled Jamie free from the ice and passionately welcomed him back home. The two of them made love on the mortuary slab. [X-Factor (1st series) #232]

Afterwards, Layla officially confessed to Jamie that she brought Guido back from the dead. She promised him there would be no more secrets between them, but time will tell if she can keep that promise. Layla was also forced to confront the fact that her knowledge of the future may be compromised. Ever since returning to the present from the Summers Rebellion, her foresight relied primarily on the journals she is keeping and would one day read in the future 80 years from now. Guido’s resurrection and Madrox’s death were not contained in her journals, making their accuracy suspect. Either the timeline has split from what was recorded in Layla’s journals, or she was (or is) actively lying to herself in them. Whatever the case, Layla can no longer be certain of what’s coming, and will have to tread carefully in the future. [X-Factor (1st series) #233-234]