COSTUME GALLERY
(click on the images to see a bigger version) 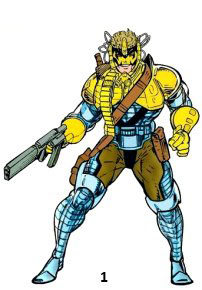 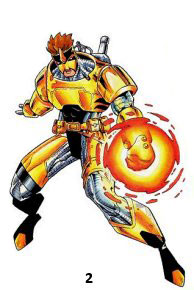 -) As a member of Team X, Maverick wore a uniform that consisted of a full black bodysuit with gold shoulder armor, straps and accents. He also wore a gold helmet with an early version of his classic face mask. [X-Men (2nd series) #5]

1) Maverick's combat armor was made of plated reinforced metal, covering him from the neck down with a dark 'V' shape connecting at his beltline. He wore boots made of the same steel metal. In addition, he had a set of brown chaps with saddlebags on his thighs, yellow gloves, epaulets and belt, and the occasional set of grenade bandoliers or shoulder slings for different weapons. His headgear was also yellow, with a set of wires and plugs on the back apparently for multiple vision modes or recording capabilities. Leaving his scalp and lower face exposed, Maverick wore a small trademark mask over his eyeline, with stylized black touches over his eye slits and underneath, resembling fangs. [X-Men (2nd series) #5]

2) Maverick later slightly remodeled his armor. He kept the same underlying suit of protective metal, but now had outer armor components that appeared much more uniform. Directly over the metallic body glove, he wore a tight-fitting golden-yellow costume which extended sleevelessly over his chest, tapering at his beltline and extending into a set of chaps which ended above his knees. A black and shallow 'V' design extended down the middle of the golden-yellow, tightening up as it reached his belt. He wore metal boots, gloves, epaulets and a chest plate made of the same golden-yellow color over that. His headgear was the same color as well, but retained the same basic design he had before. [Maverick (1st series) #1] 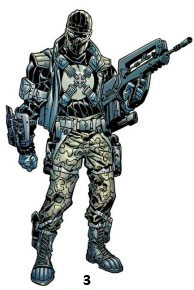 3) As Agent Zero, North wore a jet-black Vibranium weave body suit, covering him from the neck down with a large white circle in the center of his chest. He also donned a ski mask of similar material, with reflective night vision goggles built into the eyes. Black gloves, combat boots, a sleeveless jacket and a set of Army camouflage fatigue pants complete the look. Generally speaking, he was also bristling with artillery, including a metal belt, hip and ankle holsters, pouches on his upper forearms, blasters on his lower forearms and an 'X' cross-section of straps on his chest. [Weapon X: Agent Zero One-Shot]

4) Working as a freelance agent and information broker for Wolverine, Maverick wore a simple outfit befitting a "spook". This consisted of a black chestplate with a series of illuminated, electric blue panels running down the length of his torso on each side of the armor. With this he wore basic black pants, boots, gloves and a trenchcoat. [Wolverine Weapon X #1]