ALTERNATE VERSIONS
An alternate reality Maverick was among many superhumans from across the Multiverse who were recruited to serve as part of a team of Exiles, charged with repairing damaged timelines in the hopes of someday returning to theirs. Little is known about this Maverick. He was apparently an agent of SHIELD in his reality and was killed during his tenure as an Exile by an alternate version of Captain America whose shield featured jagged blades around the edges. His remains were discovered embedded in the crystalline walls of the Panoptichron by a subsequent team of Exiles led by Blink. She returned his body to his homeworld, where it materialized on the SHIELD Helicarrier.
------------------------------------------------------------ 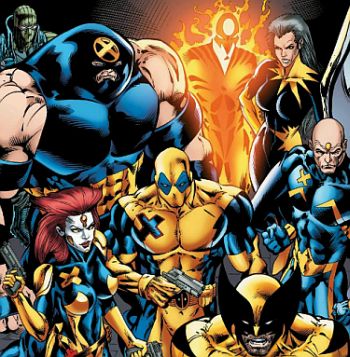 In the alternate future depicted in Weapon X: Days of Future Now, Maverick continued to operate as Agent Zero many years into the future. After the Director successfully wiped out the all three active X-Men teams, the sole surviving member Wolverine gathered a new team of X-Men to avenge their deaths and continue Xavier's mission. In addition to Zero, Wolverine recruited Archangel, Juggernaut, Aurora, Sunfire, Mystique and Deadpool. Tragically, the post-hypnotic control implants Mesmero had placed in North's mind years earlier were uncovered by Colcord, enabling him to reactivate Agent Zero as a sleeper agent and force him to murder the entire X-Men roster. It finally came down to a battle between Wolverine and Agent Zero, where a critically injured Logan held North's gun to his head, daring him to finish the job. Zero managed to resist his conditioning long enough to spare Wolverine's life and take his own life instead.