Soon, Mariko was on the verge of successfully purging Clan Yashida of its criminal elements. Her efforts came down to a final negotiation with the jonin of the Hand, Matsu’o Tsurayaba. These negotiations were interrupted by the untimely arrival of Wolverine in Japan, on unrelated business. Matsu’o had a long-standing grudge against Logan, and accused Mariko of summoning the Hand’s nemesis to Japan as an act of bad faith. Meanwhile, the Silver Samurai continued to insist Mariko give up her misguided promise to Logan, and allow Clan Yashida to continue as a criminal enterprise, preferably under his control. 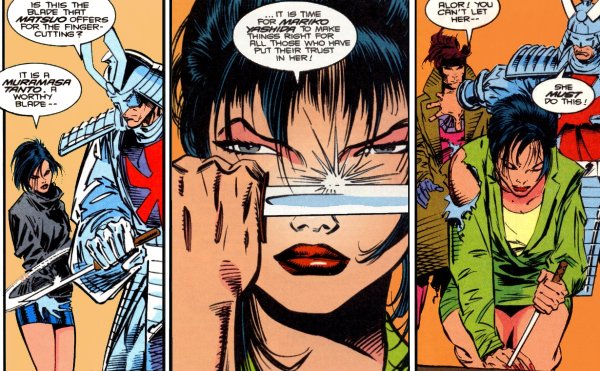 As Wolverine and Harada’s cousin, Sunfire, warred with the Hand ninja on the Tokyo estate, a single envoy named Reiko was sent through the defenses of Clan Yashida with a final offer for Mariko. The Hand would purchase Clan Yashida’s criminal holdings and then liquidate them, allowing Mariko to provide for her clan while not directly profiting from crime itself. In exchange, Matsu’o asked for one of her fingers, in the traditional sacrificial fashion of the Japanese underworld. The Silver Samurai questioned the offer, and feared the blade provided by Matsu’o was poisoned, until Reiko rather dramatically plunged the blade through her hand in order to demonstrate it was safe. Mariko agreed to the deal, but screamed as the blade pierced her skin and the blowfish toxin entered her system, for Reiko was an expert poisoner who spent years building up a tolerance. Wolverine arrived too late to save Mariko, and granted her a quick death with his claws instead of a protracted demise due to the painful neurotoxin. [Wolverine (2nd series) #56-57] 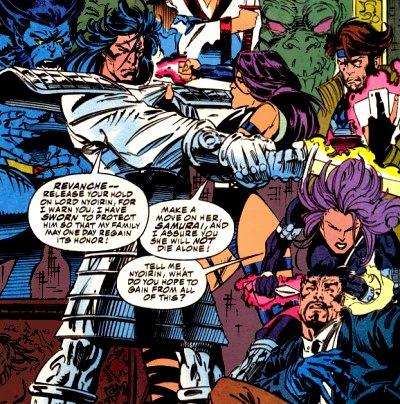 Clan Yashida was in a state of unrest after Mariko Yashida’s death. The Silver Samurai assumed his place as head of the clan, [Cable: Blood and Metal #2] but Mariko’s final efforts left Clan Yashida in a gray area between its legal and illegal dealings. The final negotiation with the Hand was never fully completed, so Clan Yashida was not totally cleansed of its criminal ties. On the other hand, the ongoing efforts Mariko made to separate Clan Yashida from criminal activities left it in a weak position among the underworld as well. The Silver Samurai was forced into an alliance with the crimelord Nyoirin to prevent his organization from forcibly swallowing the weakened Clan Yashida whole. He opposed the X-Men on Nyoirin’s behalf when they invaded the crimelord’s house looking for information on their member, Psylocke. [X-Men (2nd series) #21-23] Despite this encounter, the Silver Samurai bore the X-Men no ill will, and they joined forces mere months later when the X-Men learned that Sabretooth planned to target Clan Yashida. Harada and the mutants fought side-by-side as Creed attempted to kidnap an old telepath in the care of Clan Yashida. Mere contact with the blood on Creed’s conscience was enough to drive the telepath to his death, however, and the X-Men moved on their pursuit of Sabretooth, parting on good terms with Harada. [X-Men Unlimited (1st series) #3] 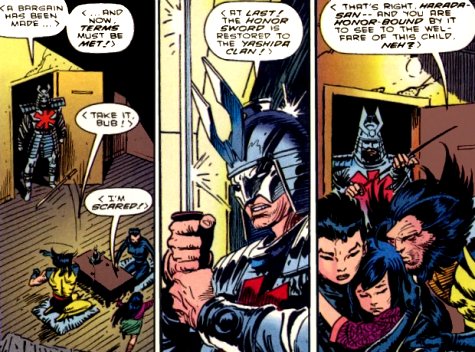 Believing he was near death after a horrific encounter with Magneto cost him his adamantium, Wolverine contacted Harada as part of an effort to settle his affairs. The Samurai assisted Logan in arranging placement for his foster daughter, Amiko Kobayashi. Formerly a ward of Lady Mariko, Amiko fell into the foster care system after Harada’s half-sister was killed. With the influence of Clan Yashida behind him, the Silver Samurai helped Wolverine get Amiko legally placed with the ronin Yukio and pledged to look after her and her well-being throughout her life. In exchange, Wolverine returned the Honor Sword of the Clan Yashida to Harada, reuniting the Silver Samurai and the sword of his ancestors. [Wolverine (2nd series) #82] The Silver Samurai kept his word to Logan even after the X-Man recovered from his injuries, and occasionally visited Yukio and Amiko to check up on their progress. [Elektra (1st series) #15] 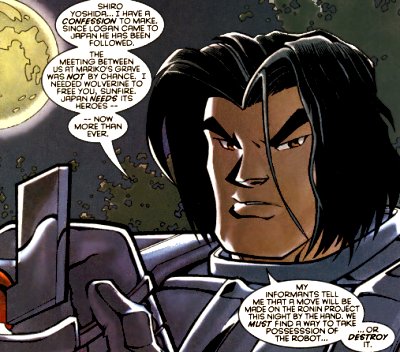 In the aftermath of Onslaught’s assault on New York and the loss of Earth’s Mightiest Heroes, the Silver Samurai began to reconsider his place in the world. He saw a need for heroes in his homeland, and dreamed of possibly filling that role as an honorable samurai devoted to a cause, instead of a mercenary and ronin as he had lived for most of his life. Harada’s new determination also left him concerned by the fate of his cousin, Sunfire, who had been unjustly detained for months after a flare up of his atomic powers left the Japanese people in fear of another nuclear disaster on their soil. Meeting with Wolverine at Mariko’s grave, the Samurai asked for assistance in freeing Sunfire from his imprisonment. When they succeeded, he warned the mutant heroes of a twofold threat. Clan spies had uncovered information indicating that the Japanese government planned to reactivate the Godzilla-fighting Red Ronin war machine as a mutant deterrent. Worse, the Hand planned to steal Red Ronin and use the mechanoid for their own evil ends. The mutants interrupted the rise of Red Ronin, and prevented it from being used against mutants or the Japanese people at large by either party. [Wolverine Annual ‘96]

As Sunfire left the country in order to seek treatment for his unstable powers in Canada, Harada decided to step forward as the new champion of Japan. He made contact with the Japanese government and offered them his sword and services as a defender of the people. Building off of Silver Samurai’s recruitment, Japan decided to form their own official super-hero team, like the Canadian Alpha Flight or the Russian Winter Guard, which they named Big Hero 6. The group was co-sponsored by the Japanese government and the Giri Corporation, who also provided funding, staff and housing for the group. The Silver Samurai was the veteran member of the fledgling group, and was quickly named team leader by their liaison, Mr. Oshima. Harada was self-conscious of his position, however, and believed the government would replace him with his more famous cousin, should Sunfire ever return to Japan’s shores. 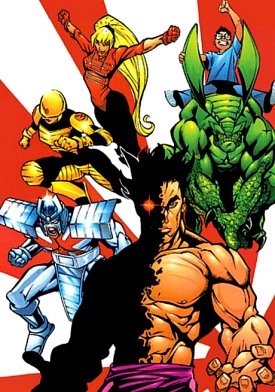 During the formation of Big Hero 6, Silver Samurai oversaw recruitment of the first two agents, Honey Lemon and Gogo Tomago. Amusingly, it was the recruitment of a thirteen year old boy named Hiro Takachiho that caused Harada the most difficulty. Hiro was a child prodigy and polymath, and his sentient robotic bodyguard Monster Baymax would be equally welcome in Big Hero 6. Unfortunately, Hiro’s widowed mother politely declined Harada’s request that Hiro serve with Big Hero 6, hoping her son could have a relatively normal childhood before deciding what to dedicate his intelligence to in life. Harada tried again, approaching Hiro directly at school as the Silver Samurai, only to discover the boy was a devout Sunfire fanboy, who considered Harada a distant second next to his cousin.

Hiro’s own private investigations led Silver Samurai and Big Hero 6 to Sunfire, who had returned to Japan in secret. Believing his own powers were killing him with an aggressive form of cancer, Shiro came back from Canada in order to die in the land of his birth. This also brought the group into conflict with Everwraith, a supernatural entity forged from the collective suffering of Hiroshima and Nagasaki. Believing that Japan prospered from adversity, Everwraith planned to use Sunfire to trigger another nuclear disaster within the country’s borders. The Samurai and Big Hero 6 worked together and prevented Everwraith from carrying out his scheme. To Harada’s selfish relief, Sunfire acknowledged Big Hero 6 as his friends and teammates, but chose not to join the group permanently. [Sunfire and Big Hero 6 #1-3]

Even without a full-time sixth member, Big Hero 6 continued to operate in Japan under Harada’s command. They confronted the monster called X the Unknown and provided disaster relief during the Masters of Evil’s worldwide weather extortion scheme. [Alpha Flight (2nd series) #17, Thunderbolts (1st series) #25] The Silver Samurai also made himself available to the Japanese government for solo missions as a field operative, such as when he tracked a traitor onto United States soil. [X-Men Unlimited (1st series) #24]

Despite his ties to the government and focus on acting as a hero, the Silver Samurai retained control of Clan Yashida and its still active criminal ties. The lack of attention he showed to these ties led to the clan’s downfall, however, when the Chinese based Clan Kaishek overwhelmed Clan Yashida and forced Silver Samurai to submit. Haan Kaishek made Harada act as his personal agent after the takeover, shaming Harada for his failures as clan leader and driving him to drink. The Silver Samurai ultimately rebelled against Kaishek when he refused an order to murder the helpless child of one of the clan’s rivals.

Fleeing from his pursuers, Silver Samurai sought refuge with Yukio and the visiting Wolverine. Harada was stabbed through the chest by Haan Kaishek with his own sword during the brawl that followed, and the group only escaped thanks to Gom Kaishek, who wished to enlist Wolverine’s aid in overthrowing his brother Haan’s rule of the clan. Gom held the injured Harada, Yukio and Amiko hostage to force Logan into doing his bidding, but Kia Kaishek manipulated both of her brothers against each other, arranging their deaths to claim power for herself. The Silver Samurai and Yukio escaped from the Kaisheks, and joined up with Logan as they raided Clan Kaishek’s fortress. Harada redeemed his honor when he brought Yukio and Amiko to safety as the fortress collapsed around them and Wolverine fought to the death against Kia. [Wolverine (2nd series) #150-153] 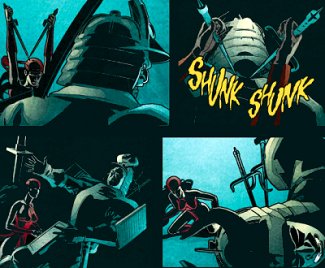 Later, for unknown reasons, the Silver Samurai offered his services to Hydra, who were involved in dealings with the Iraqi ruler Saddam Abel Dasam. He was pitted against the ninja assassin named Elektra, who had been hired by S.H.I.E.L.D. to execute Saddam. Despite his size and power, the Samurai was ultimately defeated by Elektra, who plunged her sai daggers into the seams on the back of his armor, impaling them in his neck. Harada spent a great deal of time recovering from these injuries. [Elektra (2nd series) #3-4]

On another occasion, Kenuichio caught the X-Man Kitty Pryde as she attempted to steal one of the Five Swords of Secrets from the Clan Yashida ancestral home in Agarashima. Ginrei, the Silver Spirit, had been an honored treasure of the Yashida family for generations. Harada politely offered Kitty some tea and a chance to explain before he killed her for the insult. Pryde was being blackmailed by the Path of Destiny, a cult that worshipped her former master Ogun and wished to solidify their place in the Japanese underworld. Already in possession of Kurokaze, the Black Wind, the Path hoped a second Sword of Secrets would legitimize them to the other clans. 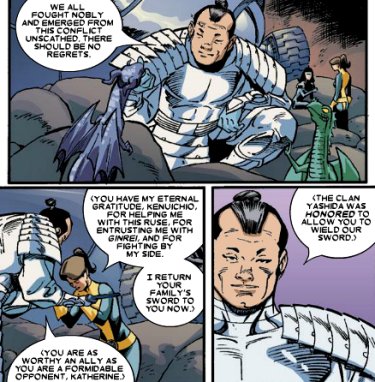 After Pryde explained her situation, as the Path of Destiny had kidnapped her dragon Lockheed, the Silver Samurai agreed to help her against her blackmailers. They arranged a mock trial by combat to fool the Path’s spotters into believing Kitty killed Harada in a match for the Silver Spirit. Free from observation, the Silver Samurai contacted Kitty’s allies in the Department of Supernatural Sciences and arranged a raid on the Path of Destiny, following in Pryde’s footsteps. The Path was defeated, and Kitty Pryde honorably returned the Silver Spirit to Kenuichio and his clan. [X-Men: Kitty Pryde – Shadow and Flame #4-5]

Further Adventures of Cyclops and Phoenix #4