Unfortunately, Harada’s growth as a leader of men and an honorable samurai was tragically reversed one night by Blindspot, the Memory Thief. Caught up in an old debt to Lady Deathstrike, Blindspot was forced to use her abilities in a plot for revenge against Sunfire and the old Brotherhood of Evil Mutants. As part of this plot, she used her memory manipulating abilities to remove the last several years of memories from the Silver Samurai. Forgetting the path of redemption on which he had been walking, Harada was convinced by Deathstrike and Blindspot that Sunfire brainwashed him into acting a hero the last few years and dismantling Clan Yashida’s criminal ties.

Quietly furious at his “dishonor,” the Silver Samurai began secretly working against his cousin from within Clan Yashida. He released documents to the media that painted Sunfire as a terrorist and gangster, destroying his public reputation. This included a photo of Sunfire cavorting with Mystique’s Brotherhood, something Shiro no longer remembered thanks to Blindspot. Disgraced by the media onslaught, Shiro was on the verge of committing seppuku, with his “loyal” cousin as a second, when he was contacted at the last moment by Rogue of the X-Men. Rogue also had no memory of the photo showing them with Mystique, and wanted to compare notes with Shiro. 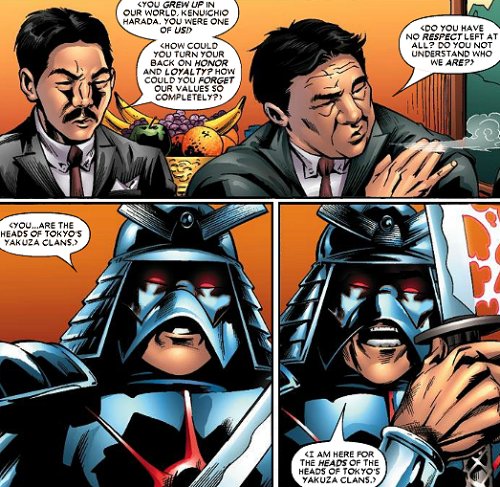 Rogue was a distraction, and so when Sunfire asked Harada to send a plane to America for her, he sent Lady Deathstrike aboard that plane to kill the X-Man. Although Rogue escaped and made her way to Japan anyway, she and Sunfire were too busy trying to clear his name to even suspect the honorable Silver Samurai of any misdeeds. With his cousin distracted, Harada struck fast and hard to reclaim his father’s legacy. He summoned the heads of all Tokyo’s Yakuza clans… and left with their heads, so that no one stood between him and control of the Japanese underworld.

The Silver Samurai gathered the remaining lieutenants of the Yakuza to a kabuki theatre in the Asakusa Rokku district of Tokyo. Harada demonstrated his skill and ambition to the underbosses, and impressed them into agreeing to serve under him as the new oyabun of the Yakuza, the Silver Shogun. Sunfire and Rogue finally wised up and confronted Harada at the theatre, but he held them at bay and escaped during the melee, his role as oyabun apparently intact. Blindspot and Deathstrike were ultimately dealt with separately by Rogue, but the Silver Samurai’s memories (and reformation) were seemingly lost for good. [Rogue (3rd series) #7-9] 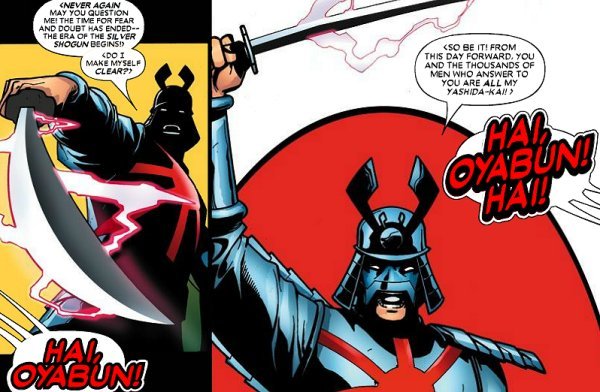 Harada’s newfound prominence in the underworld did not begin easily. He was kidnapped from his own private plane in flight by a corrupt faction inside S.H.I.E.L.D. (likely a group of Skrull infiltrators acting as part of their invasion plan). He woke up deep within the Raft prison facility off the coast of Manhattan, where he was held without notice or trial until a riot sparked by Electro offered him the opportunity to escape. Operatives claiming to work for the Japanese Secret Service spirited him out of the country and back to the Clan Yashida stronghold in Japan. [New Avengers (1st series) #1-3] 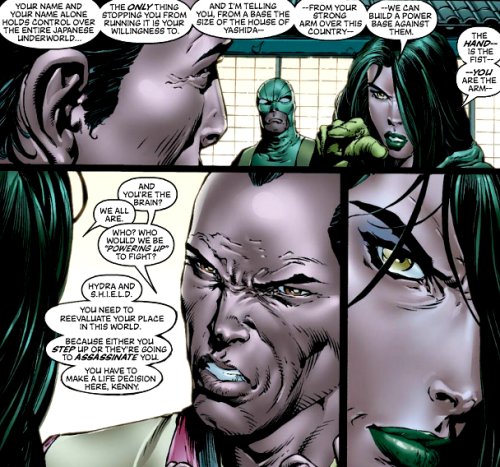 Only after they returned home did the Samurai learn his escorts actually worked for the Hand. After years apart, Kenuichio found Viper waiting for him at Clan Yashida’s ancestral home, looking to arrange an alliance between the Japanese underworld and factions of the Hand and Hydra. She claimed that both S.H.I.E.L.D. and Hydra had become corrupt in recent months, and a new world order was necessary for all parties involved. Despite Viper’s attempts to play on their past relationship, the Silver Samurai remained unconvinced. When the Avengers arrived and subdued Viper, the Silver Samurai joined them in disabling the representatives of the Hand in his home. Although he wanted nothing to do with the alliance, Harada was still furious over being kidnapped and held without trial by, essentially, the US government. He went public with his kidnapping, blaming S.H.I.E.L.D. and America while deliberately drawing a large enough spotlight onto his clan to avoid being “disappeared” again by any faction in the near future. [New Avengers (1st series) #11-13]

As part of his new high profile, the Silver Samurai accepted a position as captain of the Japanese prime minister’s security detail. When the prime minister’s diplomatic convoy was surprisingly attacked by Wolverine, Harada was present. Logan wasn’t there for the prime minister, however, but for the Samurai. As they fought, Wolverine demanded information from the Silver Samurai about Muramasa, information which he was honor bound to withhold as Keeper of the Secrets of the Old World. Logan had recently regained his full memories, and was on a quest to eliminate those responsible for manipulating him throughout his life. 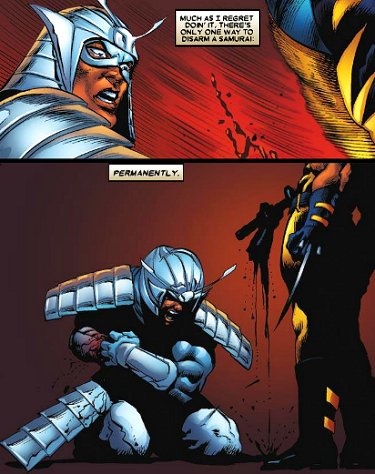 A Muramasa blade Logan forged decades ago with his own hatred was key to his efforts, and he wanted to know who else knew of the blade’s existence. The Silver Samurai’s oath as the Keeper prevented him from discussing Muramasa with Logan, or even acknowledging the existence of the man. Wolverine wouldn’t take no for an answer, though, and so Harada caught him off guard with a secret he was not bound to keep: Logan’s escape from the Weapon X Project didn’t happen without help. The surprise revelation gave the Samurai an opening, and he plunged his katana into Wolverine’s chest. Any ordinary opponent would have died, but Wolverine took the blade and separated it from Kenuichio by cutting the Samurai’s hand off at the wrist. Defeated, the Silver Samurai finished answering Logan’s questions about Weapon X, and so Logan left him with his life and his honor, asking no more about Muramasa. [Wolverine (3rd series) #36-37, Wolverine: Origins #2]

Despite his refusal to join her alliance, Kenuichio and the Viper renewed their personal relationship after the encounter with the Avengers. At least, they did until the secret rulers of Hydra called her back into service for the ultimate uprising. [Secret Warriors #2] Under orders from Baron Strucker, Viper and the new Madame Hydra kidnapped and ransomed the wives and children of Clan Yashida’s 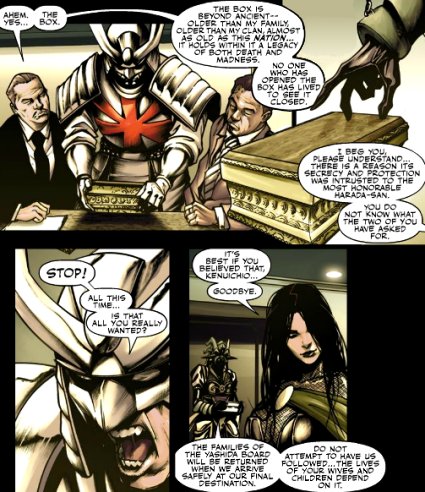 ruling board. With this powerful leverage, Hydra forced Clan Yashida to devote much of their manufacturing facilities to the Typhon Group, Hydra’s public corporate face. Furthermore, they required The Box, and the power source within that Shoji Soma once entrusted to Lord Shingen years ago. The Silver Samurai capitulated to their demands in exchange for his clan’s families, but he was furious at Viper for betraying his trust and forcing him to tarnish his honor by turning over The Box. He accused her of manipulating him from the start, believing that their entire history and relationship was in preparation of this deceit. The truth was far more complicated, as Viper actually DID love Kenuichio, but she was bound by her service to Hydra and did not contradict his accusations, thinking it would perhaps be better if he thought the worst of her. [Secret Warriors #6]

The Japanese underworld remained in a state of unrest, despite the Silver Samurai’s attempts to stabilize it. When the Skrull Elektra galvanized the Hand into seeking power for themselves, Clan Yashida was caught in a dangerous turf war between the Hand and other factions. [New Avengers (1st series) #28-30] Although the Hand quieted down after the death of “Elektra,” they still remained a force to be reckoned with. Against the Silver Samurai’s wishes, the council of Clan Yashida agreed to an alliance with the Hand, orchestrated by Mariko’s killer, Matsu’o Tsurayaba. The clan council was willing to dishonor itself with the murderers of their former oyabun in the name of profit, a maneuver Harada strongly opposed. The Silver Samurai was on the verge of being ousted by his own clan when Wolverine arrived and began savagely attacking Clan Yashida’s warriors. A deeper game was being played by all parties involved: Wolverine’s origin quest had led him to confront an ancient mastermind known as Romulus and he needed the Silver Samurai’s aid for that quest. By attacking Clan Yashida at that moment, he gave Harada the opportunity to reassert his control over the Clan. In fact, the clan council’s alliance with the Hand had secretly been plotted by Romulus himself. 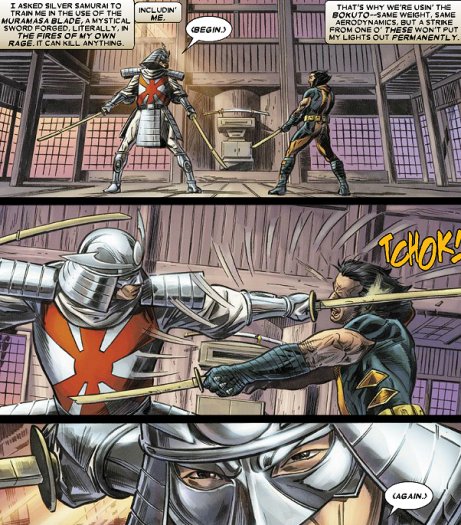 Discerning Logan’s motives, the Samurai agreed to raise his sword in defense of the clan council only if they reneged on the alliance with the Hand. Fearing for their lives, the council agreed. Although further conflict was no longer necessary and Wolverine had saved Clan Yashida from further dishonor, Harada still remembered losing his hand to the X-Man. Kenuichio beat Logan around the temple a little longer than necessary for good measure. Satisfied for the moment, the Silver Samurai attended to Wolverine’s objective: training in the use of the Muramasa blade he had recovered. They trained for a week straight as Harada coached Wolverine to remember his past samurai training and moves. [Wolverine: Origins #42-45]

Not long after that, Silver Samurai and Clan Yashida were ransacked at the Agarashima compound by agents of the Red Right Hand. As part of their elaborate revenge plot against Wolverine, the Right Hand intended to murder as many of Wolverine’s friends, family and allies as they could find. Their Black Samurai team trained for years to counter Harada specifically.

They lay siege to Clan Yashida and burned the ancestral home to ash. Facing his last stand, the Silver Samurai fought his way through swordsmen, archers and all variety of attackers. Each member of the Black Samurai had spent countless hours preparing for this single raid, and yet in the end they all fell before the determination of Kenuichio Harada. When the last opponent was felled, the Silver Samurai made his way to the grave marker of his sister, Mariko. As his wounds caught up to him, the Silver Samurai’s final thoughts were of his son, Shingen, and how he would miss him. [Wolverine (4th series) #1]