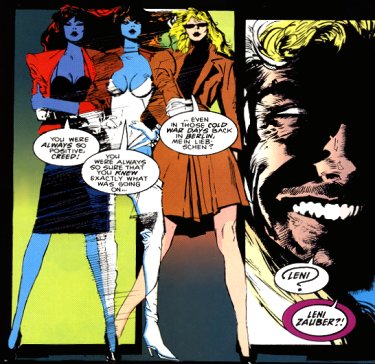 Sometime during his service with Logan, Creed was ordered to extract from East Berlin a German spy named Leni Zauber. During their time together hiding in a safe house, the two struck up a sexual relationship. Unknown to Creed at the time, the woman he met was actually Mystique, who was impersonating Leni Zauber on that mission. Shortly thereafter, Mystique disappeared by faking her death and leaving behind the body of the real Leni Zauber for Creed to find and identify. It would be decades before Creed learned the truth about the woman he had known as Leni Zauber, or that the two had conceived a child during their brief time together. [Sabretooth (1st series) #3-4, X-Men Unlimited (1st series) #4]

While on vacation in 1968, Sabretooth went to Vietnam as a mercenary and was hired by a woman to investigate goings on in the jungle. Before beginning the job proper, Sabretooth enjoyed himself with one of his favorite pastimes, killing prostitutes. At a local bar, Creed was located by John Greycrow, a mutant going by the name of Scalphunter. Employed by Mister Sinister, who was responsible for the mysterious “goings on,” Scalphunter informed Creed that his client had been killed for asking too many questions, but offered to compensate Sabretooth for his time and trouble to avoid any unpleasantness. Shrugging the whole thing off, Sabretooth accepted payment and departed, never learning the connection to, or existence of, Sinister. [Weapon X (2nd series) #27] 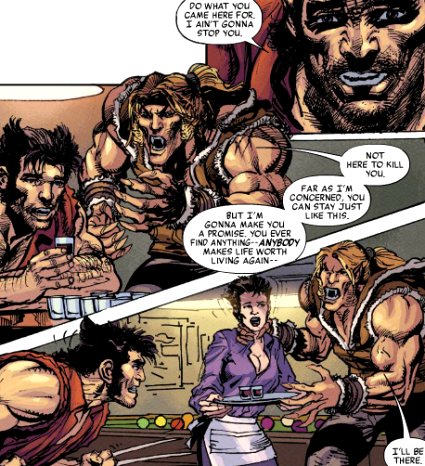 Team X eventually dissolved, and the members went their separate ways. Creed continued to perform covert ops for the government, either as a mercenary or a salaried agent. He also worked with Logan on occasion during this period as well, and their camaraderie with each other suggests further memory modification after their falling out during Team X. In fact, when Logan realized that the U.S. government had learned of mutants’ existence and was beginning to collect them, it was Creed whom he first called. Still the mercenary, Creed scoffed at Logan’s crusade on behalf of their fellow mutants and only assisted when Logan promised to pay him. However, things became more personal when Creed soon developed what seemed to be a genuine emotional attachment to their first recruit, a young woman with impressive powers of illusion. Going by the name of Holo, the young woman reciprocated Creed’s physical, but not emotional, attraction. However, Creed never had a chance to realize this, after she was killed during a confrontation with Logan’s group and a squad of prototype Sentinels. As she died, Holo allowed Creed to experience a lifetime together with her, during which they married, had children and grew old together. Reality soon set back in and Creed could only watch her die, after which he blamed Logan personally, promising always to be there in the future to take away anything or anybody which made his life worth living. [First X-Men #1-5]

Some years later, Sabretooth and Logan once again crossed paths, this time on opposite sides of the mutant agenda. Sabretooth was working for a secret cabal comprised of interests within both the U.S. and Canadian governments, 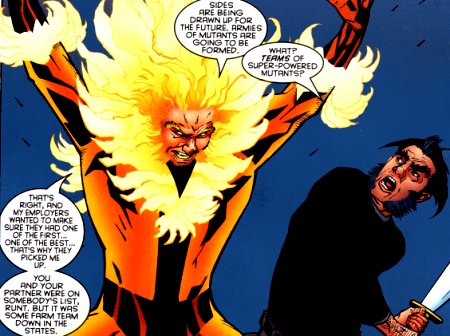 which was receiving funds through the Hellfire Club. The group used Sabretooth to keep others from discovering their conspiracy. When Sabretooth assassinated Canadian secret agent Neil Langram, it drew the attention of Langram’s partner, Agent Logan. Acting against orders, Logan investigated Langram’s death only to find that everyone who might have known anything had been terminated by Sabretooth. Ultimately, the two once again came face to face, but Sabretooth escaped by detonating a bomb, from which he recovered far more quickly than Logan. [Logan: Shadow Society]

Despite his government work and mercenary activities, Creed remained above all under Romulus’ control. When Romulus arranged for Logan to become Experiment X for the Weapon X Program’s Adamantium bonding procedure, Sabretooth accompanied Romulus as they made contact with the Professor. [Wolverine (3rd series) #54] 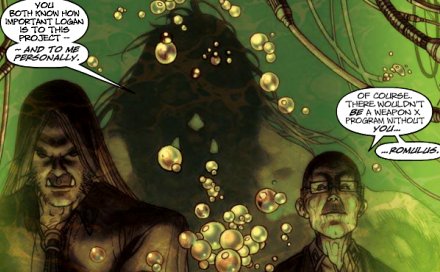 Soon, Sabretooth also became a test subject as Weapon X. Whether or not Creed willingly submitted himself to the program is unknown, but presumably Romulus had a hand in him (and the rest of Team X) being recruited for the Professor’s work. During this time period, Creed was subjected to additional memory implant procedures, thanks to Aldo Ferro and Weapon X. This round of memory alterations is likely when Creed’s original memories of Silver Fox’s death were restored, and when he was first implanted with the idea that Logan was his son.

Creed remained associated with the intelligence services after going through the Weapon X Program. After Logan escaped from the program and was accepted into Department H, his memory was severely damaged. He traveled to Washington DC to speak with the inventor of Adamantium, Dr. MacLain, to find answers. An unidentified party dispatched Creed to the scene when Logan was spotted, and he ordered MacLain to stop talking about his theories. Creed was amused that Logan had no memory of him, and initially played things nice while subtly mentioning their shared history, 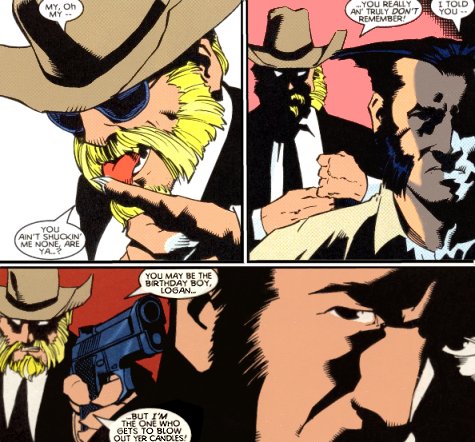 including a veiled reference to killing Silver Fox. Ultimately, Creed attempted to kill Logan, so that his superiors could study Logan’s skeleton, but Logan’s new Adamantium claws tipped the edge in Logan’s favor. Rather than finishing him off, though, Logan simply walked away, satisfied with a slash to Creed’s gut with his claws. [Wolverine (2nd series) minus 1]
NOTE: Who Creed represented at this time is unclear. He may have been working directly for the Professor, whose program was then governed under the Department of Agriculture’s Pest Control Division. He may have been released from Weapon X as a sleeper agent by this point, and merely returned to his former work as a CIA troubleshooter. It’s also possible he was working directly for Romulus at this point, or doing his bidding through one of the other agencies mentioned. 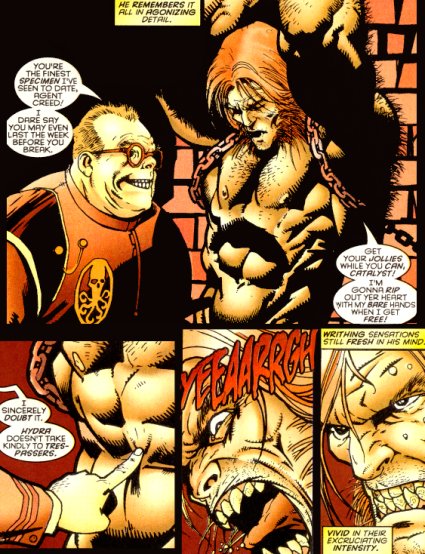 A few years later, Creed was in the direct employ of the CIA when he was sent on an extraction mission to the outskirts of Jerusalem. On this mission, Sabretooth unknowingly had another encounter with Mystique, who at the time was disguised as a male agent of the Israeli Mossad, Amichai Benvenisti. They were looking to retrieve Mystique’s friend Destiny, and the mission brought them into conflict with Hydra. The three were captured by the Hydra scientist called Catalyst, who took great pleasure in torturing the genetic oddity that was Sabretooth. This torture deeply affected Creed and left lasting psychological trauma. Together with “Amichai,” Sabretooth escaped but was denied revenge when Catalyst apparently died in one of his own torture mechanisms. [Sabretooth & Mystique #1-3]

At some point following this mission, Creed’s relationship with the government soured and he began working solely as a criminal mercenary. On one occasion, he returned to Madripoor, where he crossed paths with an old associate of Logan’s, named Seraph. Seraph called Logan for assistance, but even with the aid of the mercenary called Viper, the encounter turned tragically violent. Seraph was critically wounded in a skirmish with Sabretooth before Viper could extract her and Logan to safety. [Wolverine (2nd series) #126] 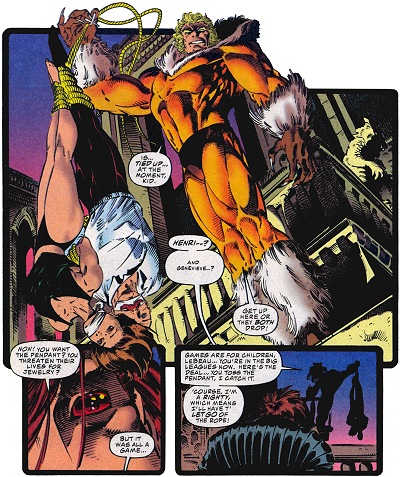 On another job, Sabretooth was hired by the wealthy Martin Herzog to recover a pendant called the Cheating Star from his ex-mistress, Genevieve Darceneaux. Initially a straightforward job, Sabretooth was foiled when a teenager named Remy LeBeau came to Genevieve’s rescue. Sabretooth was familiar with the New Orleans’ Thieves Guild and recognized LeBeau as a member of that clan. Suspicious of LeBeau’s true intentions, Creed decided to hold back for the time being to see what this young thief really had planned for Genevieve. Sure enough, LeBeau romanced Genevieve for a time before stealing the Cheating Star for himself. Once he did, Sabretooth made his move. Creed kidnapped Genevieve and Remy’s brother, Henri, forcing LeBeau to choose between them or the pendent. Though LeBeau surrendered the pendant, Sabretooth dropped his two hostages to their deaths, leaving LeBeau only enough time to save one, his brother. Amused by the incident, Sabretooth vanished into the night while Remy cradled the dying girl in his arms. [X-Men (2nd series) #33] 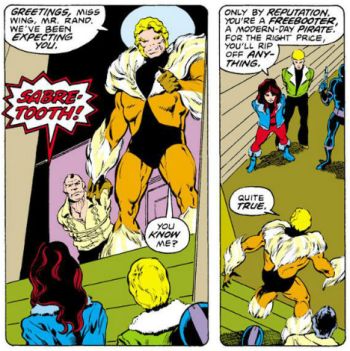 Continuing his life as a mercenary, Sabretooth began to cultivate a reputation as the ultimate freebooter, able to do any job for the right price. This reputation led to his employment by a master art thief called Montenegro, who had been ripping off priceless artwork from the Rand-Meachum Corporation. When the mystery of the thefts drew scrutiny, the art thief hired Sabretooth and his gang of mercenaries to thwart those investigating. Unfortunately for Sabretooth, this in turn drew the attention of costumed martial artist and adventurer Iron Fist, who happened to be the major owner of Rand-Meachum. In their first skirmish, Iron Fist was unprepared, but managed to turn the tables in their second encounter by relying on his skill, rather than speed & brute strength, as Sabretooth did. [Iron Fist (1st series) #14]

In police custody following his encounter with Iron Fist, Sabretooth was soon transferred from custody of the Canadian Ministry of Defense to SHIELD. It was the hope of the Canadian government that SHIELD would train Sabretooth to recover Wolverine, who had recently quit Department H to join the X-Men. Department H viewed this as a government operative gone AWOL, and wanted their investment back. Sabretooth accepted the job for pay but took his first opportunity for escape when it came while being transported through Manhattan. However, Sabretooth soon encountered Ms. Marvel and, after a battle in the New York subway system, he was recaptured. [Marvel Super-Heroes (2nd series) #10]