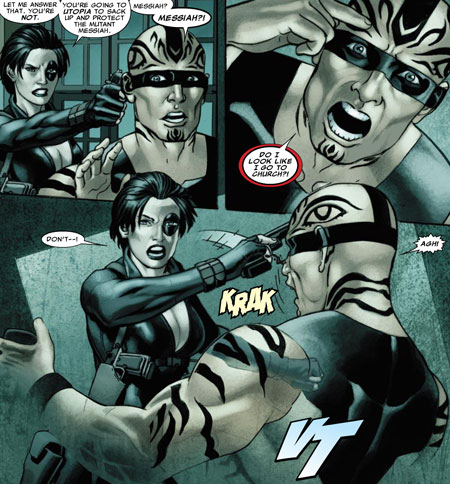 Surprisingly, the Vanisher decided to remain on X-Force after defeating Selene, even though several other team members quit. When the mutant messiah Hope returned from the future, X-Force was enlisted in defending her against Bastion's anti-mutant hordes. Telford waited in San Francisco with Domino on standby. Unfortunately for him, Bastion's plans for eliminating Hope and the X-Men required that he neutralize each of the X-Men's teleporters. Telford happened to overhear Cyclops relaying this intel to Domino over her communicator. Unsurprisingly, Telford panicked and decided to abandon the X-Men while he still had a chance. Despite Domino's violent protestations, he retreated to his safe house in Portugal. Unfortunately for him, Bastion had anticipated this move. Telford arrived home to find his prostitutes all dead, and Steven Lang—the same Steven Lang who once kidnapped and experimented on him—waiting for him. Lang and his Purifiers riddled the Vanisher with bullets. He teleported away, but his wounds were so severe by the time he escaped that he collapsed in a ditch on the side of the road and lost consciousness, seemingly dead. [Second Coming crossover]

Somehow, Telford soon reappeared among the ranks of the living—curiously enough, without any of his facial tattoos. He made no effort to contact the X-Men after leaving them to Bastion's mercy, nor they him. 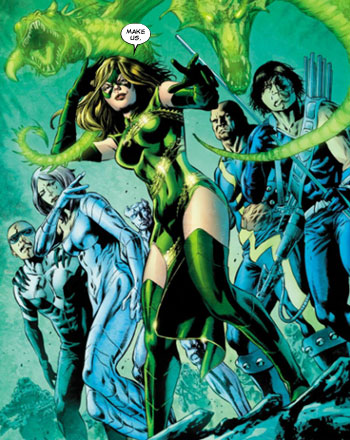 Through means unknown, he fell in with Chimera and the Marauders and, under the grip of the villainess Susan Hatchi's mind control, ambushed the X-Men in New York City. The X-Man Karma, however, broke the hold over the Marauders, at which point they fled—albeit only after some confusion. Shortly thereafter, Hatchi, forced her pawns to kill each other, but both the Vanisher and Chimera escaped. The Vanisher's current whereabouts, as well as the motives for his behavior after his apparent death, remain a mystery. [Astonishing X-Men (3rd series) #48-50]