BIOGRAPHY - Page 2
While Magneto was forming his Brotherhood, his old friend Charles Xavier was forming his own plans to secure the future of mutantkind. Xavier and his lover, Amelia Voght, confronted Magnus on the grounds of the former death camp, Auschwitz. The two men had not seen each other in over a decade and both had changed a great deal. Xavier had been crippled and was now confined to a wheelchair while Magnus had become hardened by his experiences and donned an imposing metallic armor. He kept the name Magneto to

strike fear into humanity. Charles and Amelia tried to talk Magneto out of his planned war on humanity, comparing his idea of mutant supremacy to the Nazis’ views of inherent superiority. Voght especially was frightened by his power and the talk of an impending genetic war and she begged him to set aside his philosophical differences and work together with Charles to help mutantkind. However, Magneto could not be convinced. [X-Men #minus 1] 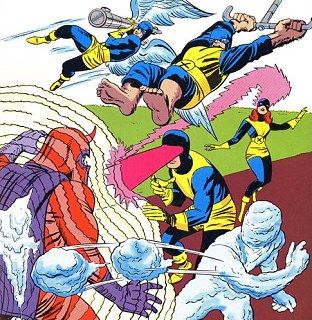 Magneto made his public debut several months later. He staged a massive display of power by thwarting a military missile launch and then claiming the Cape Citadel military base for himself. The human military forces were unprepared for Magneto’s superhuman abilities and easily fell to his power. However, during the long weeks that Magneto had been planning this attack, Xavier had gathered and trained young mutants as well, the original five X-Men. He sent his novice team to oppose Magneto. Despite the fact that this was their first field mission, the X-Men prevailed and, through teamwork, managed to surprise and overwhelm the more powerful Magneto, forcing him to flee. While his plans to conquer Cape Citadel may have failed, Magneto had succeeded in sowing the seeds of fear in humanity and officially declaring war on Homo sapiens. [X-Men (1st series) #1]

Magneto led the Brotherhood with an iron fist inspiring loyalty through fear and intimidation, but only Astra dared to leave the group when Magneto rejected her romantic advances and when her greedy intentions clashed with Magneto’s grand scheme for mutant dominance. Whereas the sycophant Toad worshipped Magneto unquestionably despite being physically and verbally abused by his leader, Mastermind viewed the Brotherhood as an avenue to greater power. The Scarlet Witch and Quicksilver despised Magneto and his controlling demeanor but felt they owed him a debt for saving Wanda’s life. This mismatched group was nonetheless effective in helping Magneto attain his goals. 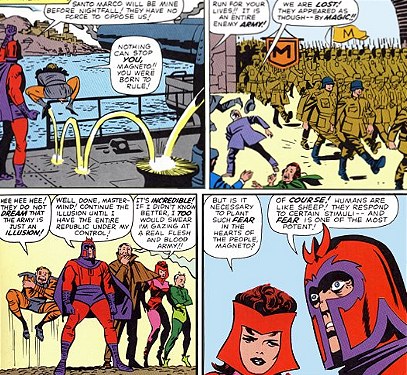 When Magneto reappeared, he had set his sights on a much bigger prize. Leading his Brotherhood of Evil Mutants, Magnus easily conquered the South American republic of Santo Marco with an illusionary army, created by Mastermind’s powers. After he installed himself as the new ruler, Magneto built a genuine army. It was not long before Xavier and his X-Men came to Santo Marco to oppose Magneto once more. Magneto anticipated this and laid a trap for the young mutants. He set a bomb to kill his adversaries and a larger nuclear device to obliterate all of Santo Marco if the first bomb failed. He and the Brotherhood fled the nation, but Quicksilver couldn’t stand the thoughts of numerous innocent people dying, so he remained long enough to assist the X-Men in defusing the nuclear bomb. [X-Men (1st series) #4]

Magneto became single-minded in his quest to attain power and obsessive about destroying the X-Men, who he saw as the major obstacle in achieving his goals. When his efforts to locate the X-Men’s headquarters proved futile, he instead sought to ally himself with other powerful mutants such as the Blob, Namor and Unus. However, time and again the X-Men would interfere, and none of these mutants would fully join the Brotherhood, either not sharing Magneto’s goals or because they realized that Magneto viewed them only as cannon fodder in his mutant war. [X-Men (1st series) #5-8]

When the mysterious and powerful Stranger arrived in New York, both the Brotherhood and the X-Men believed him to be a mutant. Both teams wanting the Stranger to join their cause, led to yet another clash between them. During the course of the battle, Magneto witnessed a portion of the Stranger’s power and, when the Stranger teleported away, Magneto and the clingy loyal Toad followed him. This proved to be their downfall, though, as the Stranger then

revealed his true alien nature. He had come to Earth to study mutations and, leaving the planet again, he took Magneto and the Toad along as specimens - after all, Magneto had repeatedly requested to team up with the Stranger. [X-Men (1st series) #11]

Held captive on the Stranger’s planet for weeks, Magneto carefully studied the Stranger’s technology and eventually found a means to escape and return to Earth. Still carrying his grudge against the X-Men, 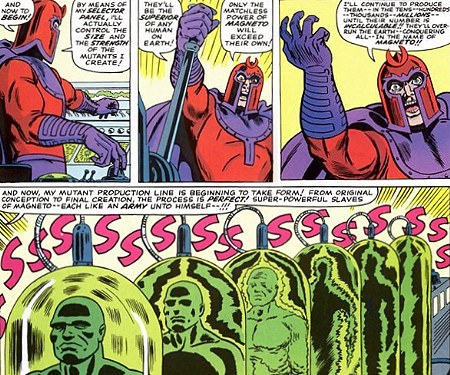 he managed to finally discover the secret location of their headquarters and attacked them when they least expected it. Magneto defeated his enemies one by one and trapped them in a metal sphere attached to a hot air balloon. Next, he captured the unsuspecting parents of one of the mutant teenagers, Warren Worthington aka the Angel, and placed them in a deep sleep. A special device enabled Magneto to use the Worthington‘s combined DNA to create an army of mutants. However, before these mutants were fully developed, the X-Men escaped from Magneto’s deathtrap and stopped the machine. The battle ended when Professor Xavier used his telepathic powers to summon the Stranger, who returned to Earth to reclaim his mutant specimen. [X-Men (1st series) #17-18]

Even though the Stranger had banished Magneto and the Toad to a remote planetoid, the self-declared master of magnetism would succeed in an escape a second time. Detecting electro-magnetic probings originating from Earth, sent out by a pair of scientists, Magneto found that he could seize control of the energy transmit beam 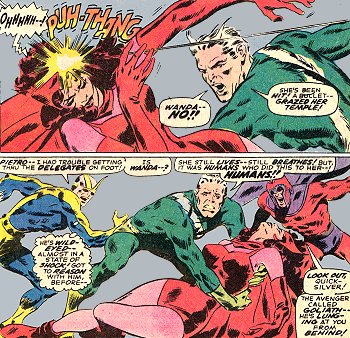 and use it to transport himself and the Toad back home. In the hopes of rebuilding his Brotherhood, Magnus contacted the Scarlet Witch and Quicksilver, despite the fact that the mutant twins had joined the Avengers during his absence and had no desire to return to their criminal lives under Magneto’s tyrannical command. Magneto declared them traitors to mutantkind but continued to try and woo them to his side, convincing them to at least accompany him to the United Nations building to hear him plead his case for a new mutant nation. Magneto’s speech to the UN delegation was broadcast on TV and the Avengers saw it and traveled to the UN building. The delegation rejected Magneto’s proposal just as the Avengers arrived and a battle broke out. Magneto manipulated events to win Pietro and Wanda back, as he convinced Quicksilver that a bullet meant for Magneto by humans had been deliberately aimed at Wanda, when in fact the trigger had been pulled and the projectile’s course magnetically altered by Magneto himself. His sister’s injury, apparently caused by a human, fueled Pietro’s doubts about humanity and led him to believe that he could no longer trust anyone else but mutants. [Avengers (1st series) #47-49]

During his imprisonment at the hands of the Stranger, Magneto had become even more angry, powerful and cruel to the members of his Brotherhood. He continued to manipulate Quicksilver and the Scarlet Witch 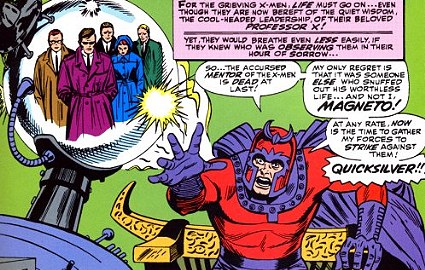 to keep them at his side and his abuse of the pathetic Toad worsened. When he learned of Charles Xavier’s apparent death (actually it was the Changeling who had died in his place), Magneto was distraught that someone other than he had been responsible for the death of his archenemy. Still, he considered this the perfect opportunity to destroy the X-Men. Before he could even launch an attack at the mutant teenagers, the X-Men tracked down the master of magnetism to his lair and launched a surprise attack on his island headquarters. But once again, Magneto proved to be more powerful than the young mutants and defeated the team soundly.

Magneto imprisoned the X-Men and considered killing them but was persuaded not to by Quicksilver. As part of his master plan, Magneto allowed the Angel to escape. The winged X-Man sought the Avengers’ help in rescuing his teammates just as Magneto had hoped. Magneto mentally subverted the remaining X-Men’s wills 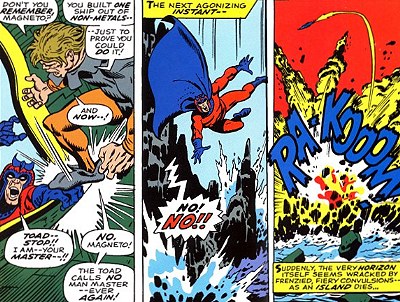 during the Angel’s absence. When the Avengers attacked the island, the X-Men fought back under Magneto’s orders. However, during the battle, the Angel destroyed some of Magneto‘s equipment, weakening the villain‘s grip on his teammates and giving the Avengers the chance to defeat them. Setting his island base to explode, Magneto fled. However, his escape was prevented by the Toad, who finally had enough of Magneto’s constant abuse. Magneto disappeared in the explosion of the island and was presumed dead by the escaping heroes. [X-Men (1st series) #43-45, Avengers (1st series) #53]