Magneto did not perish in the Atlantic. He burrowed deep into the ocean ground and discovered a series of catacombs underneath. They led him to the Savage Land, a primordial “lost land” in a secluded area of Antarctica, where dinosaurs still lived, along with various primitive human tribes. Even though Magneto’s mutant powers were considerably weakened, his resolve was not and he further explored the area and its resources. Using technology similar to some he had used in the past, Magneto experimented upon the native Savage Landers. The results were christened the Savage Land Mutates, an army of self-made “mutants” that Magneto could use to rule the Savage Land. Crafting a new persona as the “Creator,” Magnus’s plans may have succeeded were it not for the intervention of the X-Men and Ka-Zar, who opposed Magneto’s forces. 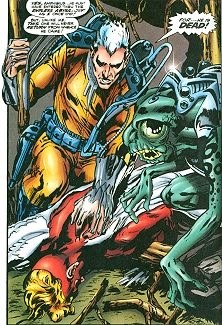 However, Magneto discovered the body of the Angel, who had just died from injuries he sustained in a battle against a pack of pteradons. Using his devices, Magneto revived the winged X-Man, who didn’t recognize the Creator, as he had never seen Magneto without his helmet during past encounters. Magneto portrayed himself as saving the Savage Land “mutants” from persecution, kind of like a “Stone Age Professor X,” and the grateful Angel agreed to help his savior against his teammates, hoping to convince them of the Creator’s noble intentions. However, Magneto only needed the Angel to stall the approaching heroes, giving him enough time to create yet another mutate. By the time the X-Men and Ka-Zar arrived in his stronghold, Magneto revealed his true identity before using his newest creation, the mesmerizing Lorelei, to capture and enthrall the X-Men. As her powers only work on males, though, Marvel Girl was unaffected and managed to destroy Magneto’s mutate-creating device. With the machine that hyper-evolved them destroyed, the Mutates returned to their original, more primitive forms. Seeing his life’s work destroyed, Magneto seemingly sacrificed himself in the resulting fires and collapsing equipment. [X-Men (1st series) #62-63]

Nevertheless, once more Magnus cheated death. This time, he fell through the floors of his Savage Land base into an underground river underneath. 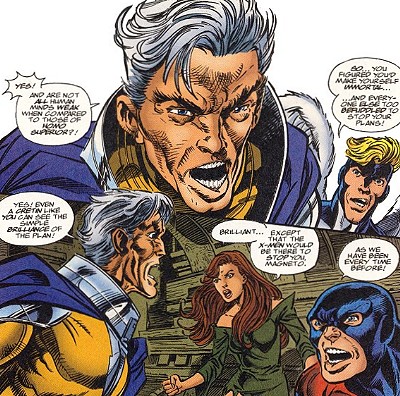 He was washed deeper into the Savage Land, where he happened upon an ancient civilization of winged humanoids. Magneto employed his rarely-used ability to project his astral form to win over their leaders, claiming that he was a ghost and had been murdered by the X-Men. Magneto had discovered that the lava in this area had strange radioactive properties that enhanced the higher brain functions of those around it, granting rapid healing and mild telepathy. Magnus planned to use an impending volcanic catastrophe to assert his dominion over the surface world. Key to his plot were radioactive gases that sapped the will of weaker minds and granted immortality. Once again, his paths crossed with that of the X-Men and they managed to thwart his plans and capture him. He soon escaped them, choosing to toss himself into the sea rather than die at a time of their choosing. [X-Men Hidden Years #1-5]

Magneto was found near death by one of the Savage Land Mutates, who carried him to a nearby island. There, Magnus gathered his strength and plotted his next move. He discovered the underground equipment that provided geothermal warmth to the Savage Land and sought to use it for his own goals. This brought him into conflict with the mutant-draining Sauron. Still in a weakened state, Magneto tried to forge an alliance with Sauron but the winged menace rejected his offer and left him to die in a fiery volcanic chasm. It took the master of magnetism three days to escape the raging fires and make his way back to the surface, where he passed out and would have been easy prey for the Savage Land’s pteradons. Fortunately, his unconscious form was discovered by Namor, the Sub-Mariner, who took Magneto to Atlantis. [X-Men Hidden Years #10-12]

When he awoke, Magneto tried once more to convince Namor to join him in a war against humanity. Namor was not immediately swayed by Magneto’s arguments but, when the Fantastic Four’s Thing inadvertently fired a missile on Atlantis, Namor responded with words of war. Magneto goaded the Atlantean king and asked to accompany him into battle. Namor agreed but insisted that he would not share command. 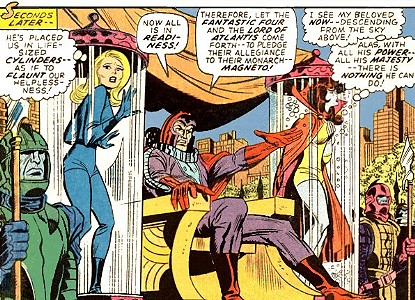 However, when the Fantastic Four arrived to confront Namor’s forces, Magneto used his magnetic powers to fan the flames of aggression between the heroes and Namor. With Namor otherwise engaged, Magneto captured his flagship and took the Invisible Girl hostage. He then lured Namor’s paramour, Lady Dorma into a trap as well. Using Sue Storm and Dorma as leverage to control Namor and the remaining members of the Fantastic Four, Magneto led the Atlantean forces to victory and conquered New York City, where he declared the world to be his. Growing overconfident, Magneto demanded for Namor and the Fantastic Four to pledge their allegiance in a public ceremony, but he underestimated Reed Richards’ genius and was easily defeated by devices that created an energy cone around him, fueled by his own magnetic powers. [Fantastic Four (1st series) #102-104, X-Men Hidden Years #20-22]

Magneto was turned over to the US military, but it didn’t him long to escape from his human captors. He continued in his quest to genetically engineer an army of mutates to help him supplant humanity. After he had rebuilt his mutating equipment and created a small contingent of mutates, Magneto set his sights on the powerful Inhumans who he wished to use to obtain an even greater mutagenic energy source. Although briefly captured by the Master of Magnetism, the Inhuman Royal family soon broke free, destroying Magneto’s equipment and along with his latest base of operations. [Amazing Adventures (2nd series) #9-10]

This proved to be a minor setback for Magneto. He resurfaced a short time later and led the Savage Land mutate called Piper and a pack of dinosaurs in an attack upon the X-Men. His goal was two-fold; first he needed to restore his waning mutant powers. When he rescued Angel in the Savage Land months earlier, he had outfitted him in a new costume. Unbeknownst to the X-Men, this uniform had been slowly sapping Warren’s mutant energies. Once he donned the costume himself, Magneto received a much needed boost to his own mutant powers, allowing him to control his victims’ blood flow to the brain, making them submissive to his orders. After defeating the X-Men, Magneto also overpowered some of the Avengers when they came to the mutants’ aid. He tested his 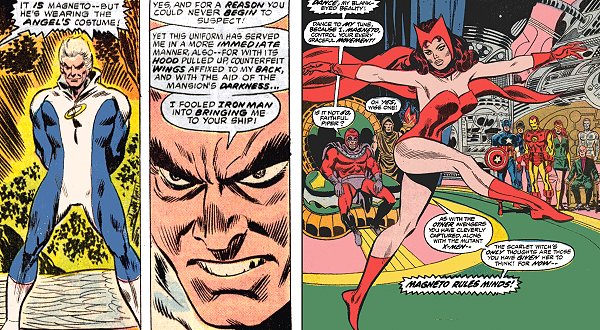 new ability on his captives, forcing the Scarlet Witch to dance for him. This was a clear sign of just how depraved and maniacal Magneto had become at this point in his campaign against humanity. Next, he used his small army of mind-controlled heroes to kidnap the members of the Atomic Energy Commission, wanting to start a nuclear war, but eventually the remaining Avengers defeated Magneto with the help of Daredevil and the Black Widow. [Avengers (1st series) #110-111] The Avengers trapped Magneto in a bubble of raw energy and placed it in the Earth’s core, where the magnetic lines of the planet were in such balance that they would completely negate Magneto’s powers.

Eventually, though, a slight fluctuation in the Earth’s magnetic field allowed him to escape, and he made his way to the surface. Along the way, he discovered a cavern filled with the remnants of an ancient advanced civilization. Magnus believed this was a convenient coincidence but, in truth, the technology was left for him to discover by the mad geneticist called Maelstrom. Magneto studied the technology and texts he found for months and uncovered the means to create the ultimate mutant! 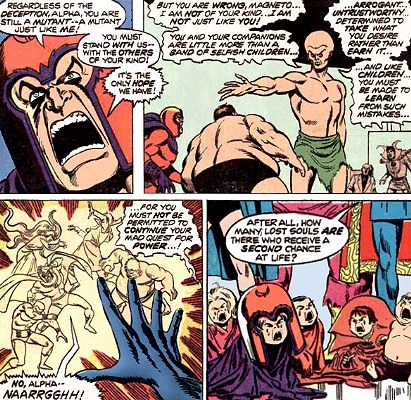 He returned to the surface and assembled a new Brotherhood of Evil Mutants comprised of the Blob, Unus the Untouchable, Mastermind and Lorelei from the Savage Land Mutates. Together, this new Brotherhood attacked Professor X and the Defenders when they stumbled upon Magneto’s efforts to create the being of near unlimited power. Naturally, a battle ensued. It was interrupted by the emergence of Alpha, the Ultimate Mutant. Alpha possessed vast powers but rudimentary intelligence and was malleable enough to be controlled by Magneto. He ordered Alpha to teleport his team to the United Nations building. Emboldened by the raw power that Alpha represented, Magnus demanded mutantkind’s birthright: control of the world! The Defenders and Xavier traveled to New York to oppose Magneto but were hard-pressed when confronted by Alpha’s might. However, Alpha continued to evolve and his child-like obedience did not last long. He saw through Magneto’s machinations and lies and turned on Magneto and his Brotherhood. He then punished Magneto and his Brotherhood for their selfish acts and thirst for power by reducing them to infancy. [Defenders (1st series) #15-16]

Xavier took the infant Magneto and entrusted his care to his close friend and colleague, Dr. Moira MacTaggert. For several months, Moira looked after the boy at her Muir Isle Mutant Research Center. Charles and Moira hoped to provide an opportunity for a better life for the child whom they hoped would grow up to be someone other than Magneto. During this period, Moira discovered an instability in Magneto’s central nervous system. She believed that his body was not adequately equipped to handle the incredible energies

it harnessed when he utilized his mutant powers. Her theory was that this deficiency affected the electro-chemical imbalances in his brain and was responsible for the significant shifts in mood and demeanor that Magnus had demonstrated over the years. It explained how the compassionate man Xavier had known in Israel could be responsible for the maniacal cruelty he exhibited as Magneto. By altering Magnus’ DNA, Moira attempted to correct this genetic defect in the hopes that she could later use the same process to help her own mutant son, Proteus. [X-Men (2nd series) #2]

However, Magnus’ second infancy was abruptly ended by the Shi’ar agent Davan Shakari, in the guise of Erik the Red. Due to the effects of an alien energy ray, Magneto was restored to the prime of life, decades younger than he had been when Alpha reduced him to infancy. Shakari needed Magneto as an ally in his battle against the X-Men and, feeling humiliated upon hearing that he had spent months as a vulnerable child in Xavier’s care, Magneto enthusiastically accepted Eric the Red’s offer of an alliance, determined to

have revenge on Xavier. Magneto easily took control of Muir Isle. From there, he monitored Xavier’s new team of X-Men. He drew them to the island and engaged them in combat. These new X-Men had been formed during the months that Magneto was an infant on Muir and had not been trained to combat him. Now at power levels he had never before experienced, Magneto easily defeated the new X-Men forcing them to flee. [X-Men (1st series) #104]

Apparently, Moira’s modifications didn’t seem to have much of an effect on Magneto’s state of mind, as he immediately resumed his efforts at securing mutantkind’s future by any means necessary. He began by seeking out mutants who might join his cause, forming a new Brotherhood of Evil Mutants that included the mutant misfits Burner, Lifter, Peeper, Shocker and Slither. The Master of Magnetism was not pleased with the group’s performance, though, and when their efforts to recruit a mysterious new mutant brought them into conflict with Captain America, Magneto entirely abandoned them. [Captain America Annual #4]