BIOGRAPHY - Page 4
Some weeks later, while helping Meggan to search for her origin, Rachel mindprobed her teammate and discovered the reason for their unexplained "mergers." They had similarly structured memories. Rachel's were scrambled and mixed with false memories, so she had to live in the present; Meggan's was a natural state, as she accepted the past without

regret, choosing to live for the moment. What's more, Rachel discovered that the usage of the Phoenix powers was responsible for her scrambled memory. To give her memory time to reassert itself, Rachel willed the Force to be dormant. [Excalibur (1st series) #44-46]

Before her memories could fully reintegrate, however, the two women had to return to the team and deal with the power of Necrom and the 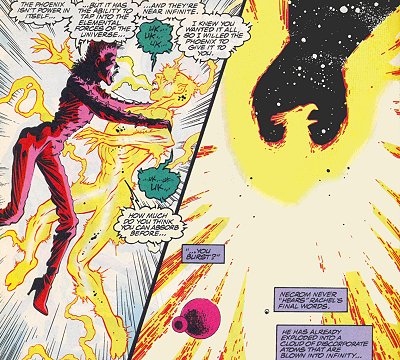 Anti-Phoenix. Centuries ago, a sorcerer named Necrom had observed the first contact between the Force and a human named Feron. Unexpectedly, he attacked and stole a portion of the Force, which he left to incubate in an animated corpse as the Anti-Phoenix. Necrom then fled elsewhere in the multiverse, awaiting the proper time to return and claim his encapsulated prize. In the present, Necrom returned and accessed the corpse and, through it, dared to wrest the full Force from Rachel. She had no choice but to reactivate her full powers and fight for her right to wield the Phoenix Force. In outer space, the two fought to a stalemate but, at last, Necrom exploded when he attempted to absorb more Phoenix energy that he could handle. Rachel too was mortally injured in the battle and was returned to Earth by the goddess, Roma. [Excalibur (1st series) #47-50] 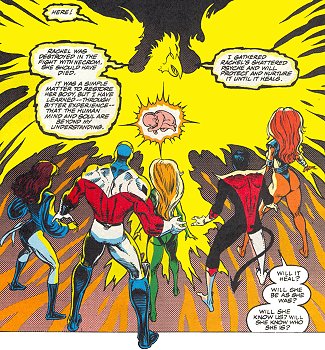 When Professor X and Jean Grey probed the catatonic Rachel, they met the Phoenix Force’s consciousness instead. It revealed Rachel’s history to them and how it met Rachel and that, upon Kate Pryde’s request in the future, it had been scrambling her memory. It also explained that Rachel’s physical injuries were so severe that her body needed special healing and nurturing. Swearing to protect Rachel inside itself, the Force departed to the stars. [Excalibur (1st series) #52] 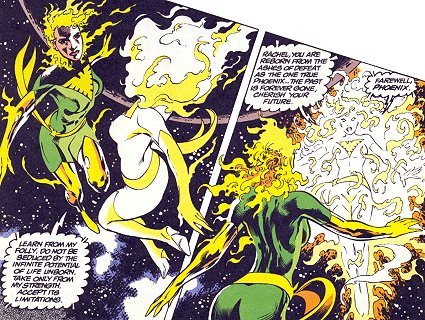 Soaring through the universe, the Force encountered Galactus again and the World Devourer told it the truth about itself. As long as it had been simply existing, it was the sum of all that lives. However, to provide itself with a conscience, it needed energy to feed off; energy that else would have been used as lifeforce for future generations. Shocked that, by her desire to explore humanity, it had once again caused mass destruction and genocide, the Force waited until Rachel had fully recovered. Afterwards, it gave up all feelings and awareness and handed full control back to Rachel. [Excalibur (1st series) #61-64] 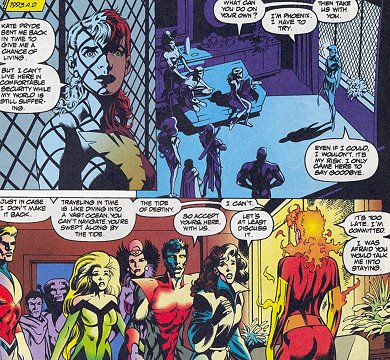 With her memory now fully intact, Rachel returned to Earth, much to the joy of her teammates. However, she only came back to say farewell. Fully recalling her life as a hound in Ahab’s service, Rachel felt responsible for her future timeline and wanted to make amends with her past by stopping Ahab. Naturally, Excalibur opted to help Rachel and they time-traveled to a point two years after Rachel had originally left. Once in the future world, Rachel also discovered the truth behind Widget. It was her old friend Kate Pryde, who had been captured by Ahab and accidentally merged with Sentinel parts, while being scanned for timewave frequencies of the escaped Rachel.

While Phoenix and Widget were captured by Ahab’s forces, they eventually broke free. With the rest of Excalibur running interference together with a team of future super-beings, Rachel and Widget managed to change the directives of the Sentinels of the era to preserve all life, thereby ending the genocide that had prevailed for decades. One of

the giant robots even saved Rachel when Ahab shot a harpoon at her. He then vowed to get revenge before escaping to whereabouts unknown. The era now saved, Rachel felt that she no longer belonged there and preferred to return to the present together with her friends and teammates. [Excalibur (1st series) #65-67] 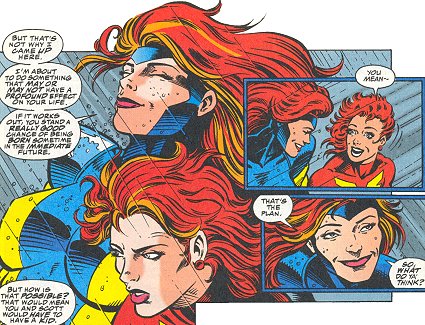 However, after their time-jump, Captain Britain was missing - he had become stuck in the time-stream. After grieving for their lost teammate, Excalibur moved on and resettled to Muir Island. Before long, Jean Grey visited them along with Xavier and Cyclops. Jean had decided to finally marry Scott and the first person she told this was Rachel, with whom Jean wanted to make up for not being able to accept her as her daughter. [Excalibur (1st series) #71] 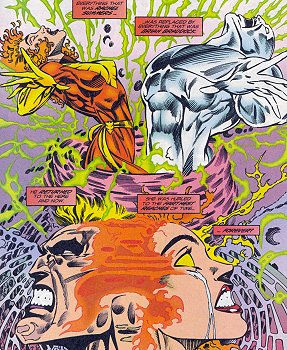 The wedding of Scott and Jean was the happiest day of Rachel’s life, after all it increased the chance of her being born into this reality one day. However, when Excalibur returned home, Rachel could no longer deny that she, a temporal anomaly herself, was still connected with Captain Britain. Over the last days, they had been switching body parts several times, and Brian was desperately trying to get back. With the help of the sorceress, Amanda Sefton, aka Day Tripper, Excalibur managed to pluck Brian back. But to do so, Rachel had to trade places with him. Bidding her teammates fare-well, Phoenix entered the time-stream to a fate unknown. [Excalibur (1st series) #73-75]