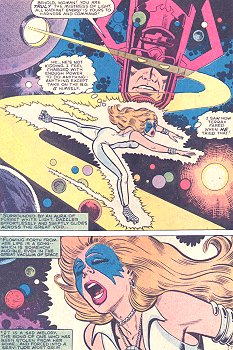 Dazzler’s main goal in life was always to become a performer but not in every reality was she given the chance to pursue her singing career. For example, in the divergent timeline depicted in [What if (1st series) #33], right after helping him retrieve his former Herald, Terrax, Galactus was so pleased with her performance that he chose her as his new Herald. Alison was given no choice in the matter, as Galactus threatened to consume Earth, should she not accept his offer. Cosmically empowered, Dazzler soared through the universe, the deep black void filled with her songs of pain and sorrow. She understood her great responsibility and kept the Devourer away from inhabited planets, saving billions of life. Over the course of long centuries, Dazzler’s gentle ways even began to affect Galactus, making him somewhat softer, though it all seemed lost when they were attacked by an alien army. In mere seconds, Galactus reverted to his old ways and terminated the aliens, causing an argument with Dazzler. Momentarily touched by her disapproval, Galactus freed Alison of her duty and allowed her to return home. However, arriving on Earth, Dazzler found the planet dead, humanity having been killed in some unknown holocaust. She then decided to return to Galactus for the sake of the rest of the universe - after all, she had managed to affect him once and might do so again.

In the Age of Apocalypse, Alison too had no chance to become the singer the she desired to be. By the time she would have been able to start a music career, Apocalypse’s forces were already dominating the planet, culling the frightened humanity. There was no place for a songstress in this world, but for a fighter. Somewhat bitter, Alison joined Magneto’s X-Men and, no longer caring about her voice, she became a chain-smoker. Due to her training, this Dazzler was more experienced and skilled in the use of her powers, her being capable of sending holographic messages across vast distances, for example. At least she found some relief among the X-Men, as she shared an intimate relationship with her teammate, Exodus, one of Magneto’s most loyal followers. Although he tried to get her to stop smoking several times, Dazzler couldn’t be bothered to even consider it, as her own dream was dead. 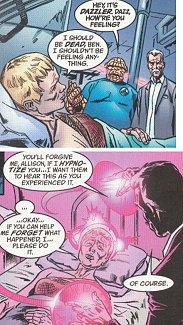 Her being a mutant marked Dazzler no longer an outcast in the Earth X universe, for every human being on Earth gained superpowers when the Inhumans’ Terrigen Mists was released into the atmosphere. Free to pursue her career, Alison found the audience’s interest in Disco music fading and less audience came to her shows each year. Her last performance ended rather tragic, with Mephisto ripping out her heart to cruelly demonstrate that the heroes had made an error in killing Death itself. Like thousands of other sick people, Dazzler suffered from mortal pain, yet could not die. 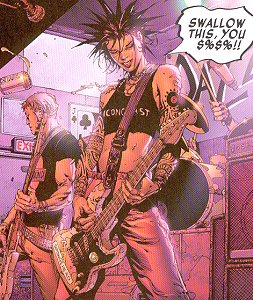 whoever offered her a record deal, Dazzler initially refused the X-Men’s invitation to join them, instead signing up with Emma Frost’s short-lived government-sponsored team. Later on, though, she did join the X-Men. Dazzler was not afraid to use her powers violently, and the majority of her teammates did not warm to her, as Dazzler often got them into trouble. She found a friend - and more - in Angel, who took responsibility for them going on a mission that had not been approved by Xavier. During a battle, Dazzler was impaled by Deathstrike and rendered comatose. In the hospital, Dazzler was secretly visited by a disturbed Nightcrawler, who kidnapped her when she woke from her coma and held her in a cave. When the X-Men learned of her fate and rescued her, Dazzler was upset when the X-Men did not take more of a hard-line with Nightcrawler. She then quit the team, wanting to pursue her dream to become a rock star. This didn’t go according to plan, though, as her band split up and she spent more time drinking in bars than performing in them. Eventually, Dazzler was approached by Storm and Bishop to join their new X-Men, and she accepted. She also convinced the Angel to leave the Academy of Tomorrow and join the new group as well.
------------------------------------------------------------
Ten to fifteen years in the future, several of the X-Men’s opponents banded together and attacked the team simultaneously on various fronts and from all sides. Eventually, Cassandra Nova was discovered to be the Mastermind behind these attacks. Dazzler was 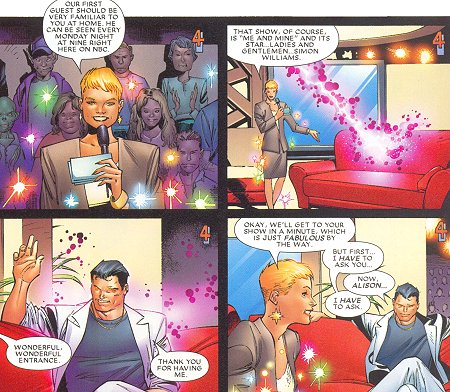 In the House of M reality, Alison Blaire was a celebrity. A famous singer and actress, she had also written books and even hosted her own talk show “Alison” on Channel 4, interviewing other celebrities such as Simon Williams, for example, a famous actor himself.