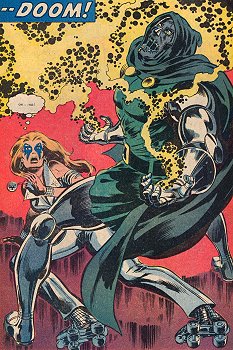 Around the same time, Alison had gone on a few dates with the Human Torch, but she found Johnny Storm too much of a macho to really delve into a deeper relationship. Osgood got Alison various gigs, though many of them went wrong. When she was to appear at a charity concert before the UN, Alison stumbled over Dr. Doom, who was stealing some piece of jewelry with mystical capabilities. Doom captured Alison and chose to send her to another dimension, where she had to locate a second stone. In the end, she destroyed both gems with a tight laser beam. With his plans thwarted, Doom left when he saw the Human Torch arriving to help Alison. [Fantastic Four (1st series) #217, Dazzler #3-4]

Another concert was interrupted by the rampaging Hulk. After the audience had fled, Alison battled the green goliath with her light powers, but finally she came to understand that he was not really a menace but a troubled, misunderstood soul. Dazzler used her light to calm the Hulk down and he transformed back into his human counterpart, Bruce Banner. [Dazzler #6-7]

When Harry Osgood was kidnapped by the minions of the Techmaster, a former technician who had disfigured himself by using untested light show equipment against Harry’s advice, Dazzler had no choice but to reveal her secret powers in front of her manager. She saved Harry’s life and, surprisingly, he was not disturbed by her being a mutant at all. In fact, he thought it would even boost her popularity, but when she asked him to keep it secret he respected Alison’s wishes. [Dazzler #8]

However, others too suspected the secret behind her “stage gimmick“ and Ali was stalked by governmental agents. When they had gathered enough evidence, they blackmailed her into letting herself be examined at Project Pegasus, otherwise they would have publicly outed Dazzler as a mutant. Alison agreed and partially even enjoyed the tests, which were designed to explore the limits of her powers. While at the Project, she even befriended security chief, Vendell Vaughn, aka Quasar. However, when after a full week of tests, Dazzler wanted to go back to her life, she was informed that she would have to remain much longer, until all tests were completed. Frustrated, Dazzler took to her room and, on the way, passed the cell block where Klaw was held. Dazzler had no idea who he was and,

when he acted the part of helpless victim, she helped him escape. Klaw showed his true face when he attempted to murder Quasar and Dazzler then opposed him, only her light powers didn’t harm the master of sound. When Klaw, in turn, blasted his raw sound energy at her, she too was unharmed and in fact absorbed it. With the energy flow started there was no way to turn it off and Alison absorbed Klaw’s entire being, as he was fully composed of sound. With the additional energy, she blasted her way out of the governmental complex. [Dazzler #9]

Right then, she was recognized by Galactus. He believed his herald, Terrax, trapped in a black hole and Dazzler was one of the 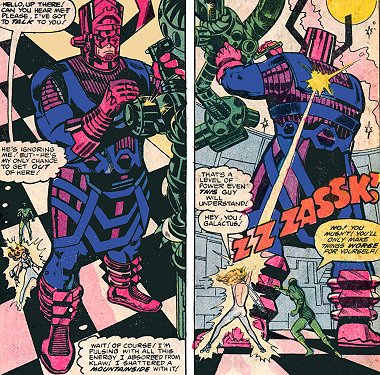 few beings in the universe who stood a chance to shed light on the inside of that space phenomen. Galactus transported her aboard his ship, bestowed to her some cosmic power and sent her to rescue Terrax. Yet, once inside the hole, Dazzler had to find that Terrax was not trapped but actually hiding there from his master. A fight started and, as Alison was still empowered by sound blasts that Galactus‘ ship kept firing inside the black hole, she was able to render Terrax unconscious. She returned the herald to his master and Galactus then went on with his usual business, forgetting the Earth mutant. Only by glowing really bright did she made her presence known and Galactus finally returned her back to her apartment in New York. [Dazzler #10-11]

Back on Earth, Dazzler found herself framed for murder. As revenge for leaving them, Project Pegasus claimed that Dazzler murdered Klaw and they presented 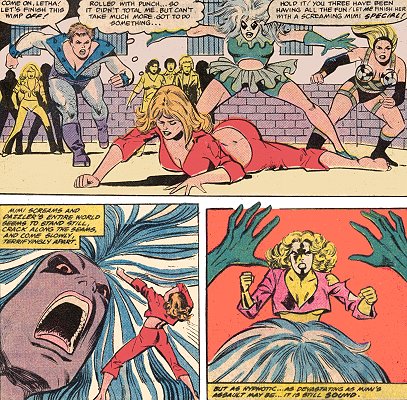 video footage of the incident. The reasoning was that Dazzler showed great control of her skills in their earlier tests and that the claim that the absorption happened by accident had to be a lie. Dazzler had to spend the night before the trial in prison on Ryker’s Island, where she ran into the Grapplers. The female villain group wanted to see the woman responsible for Klaw’s death and beat her up until Alison absorbed Screaming Mimi’s screams and knocked the Grapplers out with her light blasts. Thankfully, Quasar testified on Dazzler’s behalf and she was cleared of all charges. [Dazzler #13]

Soon, Alison found her music career on the upswing. She was booked as the opening act for the tour of Bruce Harris and, in fact, 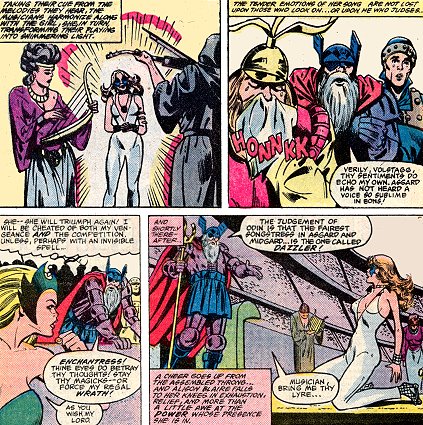 she performed so well that the fans actually loved her more than Harris. But then, all of a sudden, Dazzler found herself in Asgard. The Enchantress was still out for revenge and wanted to settle the matter in combat.

Disturbed by the fight, Odin asked what the enmity was about and the Enchantress claimed that the “mortal“ had defeated her in a song contest by cheating. Odin decided to have both females sing in front of him and all Asgardians present were so touched by Alison’s voice that she was announced as the best singer of both Asgard and Midgard (Earth), much to the Enchantress’s anger. [Dazzler #16]

Dazzler actually had the chance to join the Avengers two times. When the group had another session of deciding their next roster, Moondragon invaded and, to demonstrate her superior mental powers, she telepathically summoned many possible recruits to the mansion. Dazzler was among them, but explained that she wanted to be a singer and not an actual superhero. Moondragon sensed the deepness of her dream and let her go, despite sensing the true, full amount of her light based powers. Several weeks later, when the team was again in need of new members, Dazzler was among a few super-powered females that were invited by the Wasp, thinking that the team needed more ladies. Like most of the others, Dazzler again declined; only the She-Hulk remained behind to join. [Avengers (1st series) #211, 221]

Around the same time that Alison discovered a heart-shaped brooch among the old belongings of her mother, she found herself stalked by a handsome man. He tried to impress Alison with his fortune and his good looks, 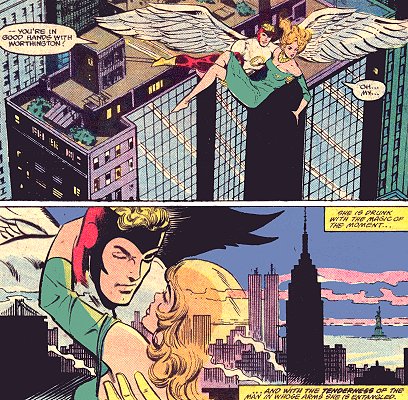 but only when he took off his clothes, Alison understood that he was the Warren Worthington III, aka the Angel. Ever since he had learned about her from the X-Men, he was curious and wanted to get to know her. At first, Alison found him a jerk and too annoying, but when he took her for a flight over New York, he literally swept her off her feet. Alison and Warren shared a deep kiss, endangering her relationship with lawyer, Ken Barnett, whom she was dating since he defended her in her murder trial. Over the next days, Warren and Ali kept seeing each other, but when they spotted Dr. Octopus, Angel immediately rushed into action, taking Dazzler along. He endangered both their lives while she had actually not wanted to get involved and let the pros handle the situation. Angrily, she told the Angel to leave her alone, but Warren would not give up so soon. He decided that helping track down Alison’s lost mother would prove his love. [Dazzler #17]

Somewhat later, Alison was attacked by the Absorbing Man, Crusher Creel, during one of her performances. As she seemed to be good friends with the Avengers, he wanted to use her as hostage against the team and was quite surprised when Dazzler attacked him with her “stage gimmick.“ Yet when Creel touched her while she was blasting her light, he transformed into a giant being composed of energy. Alison knew that she could not handle this threat alone and tried to get help from the Fantastic Four. Their headquarter was empty, but she used one of their communication devices and, by pure luck, reached the Inhumans on the lunar surface. Black Bolt had Lockjaw teleport him to New York and by absorbing and transmuting the raw sound of Black Bolt’s destructive voice, Alison possessed enough power to knock out the Absorbing Man, who then shrank back to normal size. [Dazzler #18-19] 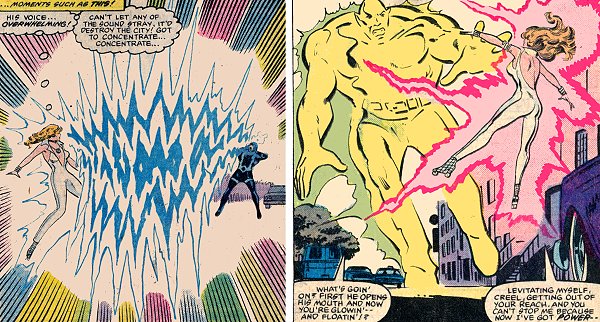