BIOGRAPHY - Page 5
Dazzler continued to travel across the US, helping people in need, until she was taken into custody by bounty hunter O.Z. Chase and his dog, Cerberus, for bailjumping. The charge was faked but Ali did not resist, she wanted to clear up the error and agreed to be taken to Colorado. Yet, during the trip, she suddenly was teleported away. The Beyonder was interested in her and had 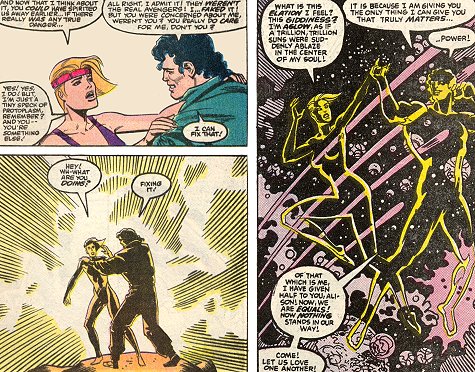 whisked her away as he wanted to explore love and needed a sufficient partner. At first, he tried to impress her with his might but it did not work. He then made Alison his equal in power and consciousness but she still resisted him. After taking these extra powers away, he simply rearranged Dazzler’s mind that she admired him, but again found this not to his satisfaction. After restoring her, he tried a more subtle approach by giving her what she desired. Yet, when he reshaped reality and Dazzler was a successful singer, she again turned him down, as she wanted to earn her fame and not getting it handed on a silver plate. The Beyonder then found that she also wanted to help others and so he deliberately created situations and empowered villains for her to fight, but after she saw through it and walked away from the battle. Finally, the alien left her alone, and Ali returned to O.Z. Chase. [Dazzler #39, Secret Wars II #4, Dazzler #40]

Once in Denver, Dazzler and O.Z. met with her father Carter Blaire, who pretended to have heard of his daughter’s problems and wanting to help. He had gathered evidence that Alison did not bailjump, as the legal matter with which she was charged with had already been settled by Roman Nekobah, and she needed not even appear before a court. O.Z. saw that the documents were correct and let her go, 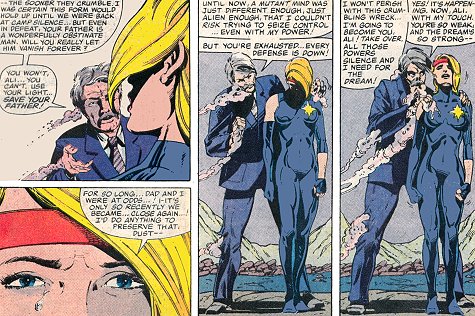 however it was not really Carter Blaire, only his body. He had been taken over by a man called Dust, one-half of the deadly duo of Dust and Silence. They were a couple of scientists who had created an enhancement drug decades ago and had even taken it themselves before knowing that, along with developing super powers, they would slowly die. They adjusted each in their own way. Silence needed to focus her telepathy through silence, while Dust refrained to using host bodies that would soon burn out and crumble to his namesake. They wanted Alison because they had discovered that exposure to her light waves could increase the drug’s effectiveness and cure the side-effects at the same time.

To ensure Dazzler’s cooperation, they had also kidnapped her mother and treated her with the same drug. Ali’s friends, O.Z. and the Beast, 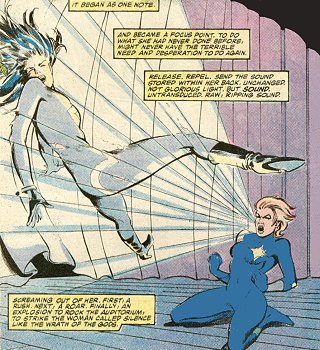 teamed up to help her and battled the many minions of the deadly couple, O.Z. had to shoot the remains of Carter Blaire to get rid of Dust. In direct battle with Silence, Dazzler found herself in a bad situation. She could not use her light power as that was exactly what the villain wanted, but she kept pumping more and more sound into Dazzler for her to absorb so that she would reach a critical limit and have to release her light. Yet, in this stressful moment, Ali managed to do a stunt she has never since been able to do. She managed to unleash the bottled up energy untransduced as raw, ripping sound. This unexpected attack made Silence lose concentration and her frail form perished after years of being maintained by her will aloe. In the aftermath of the fight, Dazzler let the authorities believe that she had died in the fight as well and decided to keep a low profile for a while. [Dazzler #41-42]

Disguising herself with a black wig, Alison re-joined the band of Lila Cheney as keyboarder and background singer. For many months it worked, although it pained her to see somebody else do what she had always been dreaming about. Slowly, she was influenced by the psychic entity Malice of the Marauders, who unlocked this buried jealousy and made Alison try to steal the center spot from Lila. Finally, Cheney contacted the X-Men

about Ali’s strange behavior and Malice had some fun, hopping around their minds, pitting the team members against each other, before escaping from the scenery. When the X-Men told Alison about the Marauders killing hundreds of Morlocks during the Mutant Massacre, she realized that she, by herself, was a too obvious target and had to join the mutant team. [Uncanny X-Men #213-214] 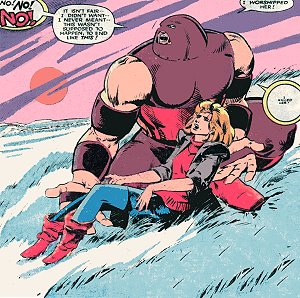 Shortly afterwards, Alison was very frustrated and went for a strall into town, where she recognized the Juggernaut. Determined to prove to the rest of the team that she was not as inexperienced and incapable as they thought, she battled him by herself, but was defeated. Cain Marko believed that he had killed her and regretted it, as he actually was a fan. Out of respect, her gave her a decent funeral and buried her, unaware that she was only unconscious. Psylocke picked up her thoughts and Dazzler gathered her last reserves to send a flare through the earth, so that the others could dig her out before suffocating. [Uncanny X-Men #217-218]

Later, when the X-Men faced their heart’s desires in the Citadel of Light and Shadow, Alison found herself with multiple scenarios she had to choose from. Alison was insecure and finally accepted to become a homeless bag lady, because, as a “loser,“ she would have the luxury of self-pity and no longer would need to make any decisions. [Uncanny X-Men Annual #11]

Returned from this unique experience, Rogue was not to pleased to see Alison run Danger Room scenarios with herself as the villain,. However, after saving each other lives in battle against the Marauders, the two women sorted out their differences. [Uncanny X-Men #221-222] 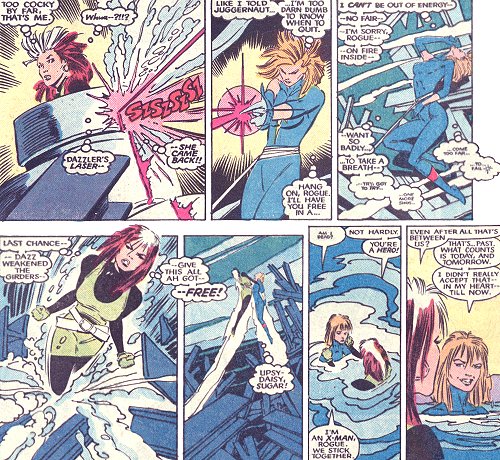 During the Fall of the Mutants, the X-Men were opposed by Freedom Force. Mocking Dazzler’s concerns for her image and her looks, Spiral made fun of her by magically attaching Destiny’s face mask to Alison’s head, thus blinding her. The X-Men’s friend, Madelyne Pryor, then guided her, while Psylocke helped along, with telepathically telling Dazzler, where to shoot. Later, 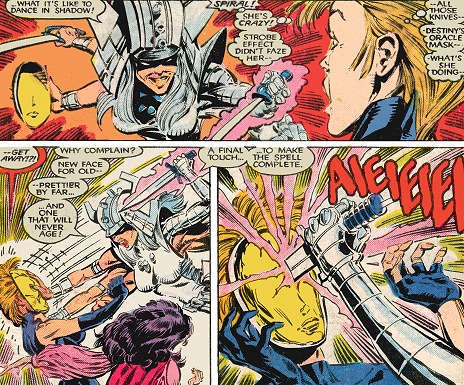 when the two groups had to work together against the mystical entity known as the Adversary, Spiral discovered that, because of the magical disturbances, she could not remove the mask. In the final battle, the X-Men's physical and spiritual essences were used as fuel for Forge's energy star, which closed the doorway to the Adversary’s plane of existence and saved the multiverse. They, in effect, died. Roma, a prisoner of the Adversary and guardian of the multiverse, used her powers to recreate the fallen X-Men from scratch, making her own minor alterations and Dazzler was remade without that cruel spell of Spiral. The X-Men, now invisible to cameras and all forms of detection equipment, resettled to Australia, claiming an abandoned ghost town in the Australian Outback, formerly used by the Reavers, as their new base of operations. [Uncanny X-Men #225-227, 229]