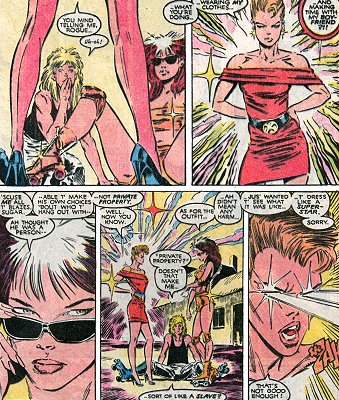 Isolated in the Australian Outback, Dazzler found herself attracted to teammate Longshot pretty soon and he responded. However, Rogue too was interested in him and they battled over the man various times, much to Longshot’s confusion. He didn’t understand the concept of jealousy and thought he could be friends with both of them. [Uncanny X-Men #239-240]

During Inferno, the X-Men were influenced by Limbo demons and it brought out the worst personality traits of the mutants. Both Dazzler and Longshot, who stems from the media-ruled Mojoverse, were only concerned about their looks and their images and stood idly by while the rest of their team battled for their lives. When it came to the big showdown between Jean and Madelyne, they complained about the others getting the “center spot“ all the time. [Uncanny X-Men #242, X-Factor (1st series) #38] 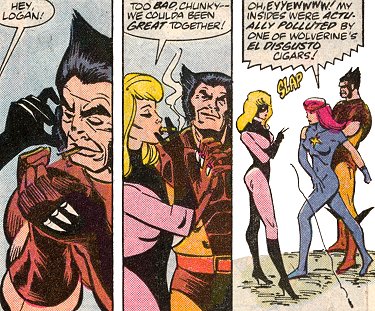 Somewhat later, a villain needed the services of the X-Men and to make them do their bidding he captured both Dazzler and Diamondback of the Serpent Society. He exchanged their minds and would only reverse the switch after the mutants had brought him some artifacts he needed. Much to Alison’s anger, Diamondback smoked, ate sugar and even tried to seduce Wolverine while being in her body. [Uncanny X-Men Annual #13]

Curiously, Dazzler used her light powers to look into the Siege Perilous. Inside, she saw various images of herself: singer, lawyer, housewife, superhero and baglady. Suddenly, all versions died. 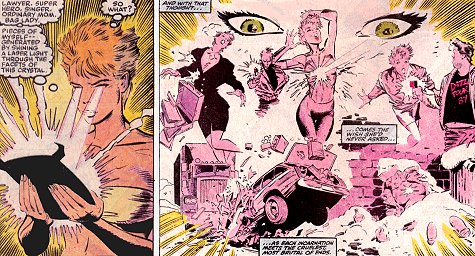 The corpses united into a single image that told Alison that everyone has to die sooner or later. The incident left her completely drained. On the same day, the X-Men had to battle a merged Nimrod / Mastermold and were loosing, when Dazzler remembered the crystal inside her pocket. She enlarged it and the robot was pulled in, but it captured Rogue and both went through. Although Rogue had told Alison to do it, she blamed herself for her teammate’s disappearance. At least she could hope that Rogue somewhere got a fresh start. [Uncanny X-Men #246-247]

Later, when the team consisted only of Havok, Dazzler, Colossus and Psylocke, the X-Men fought in the Savage Land where Betsy received a precognitive vision of them being 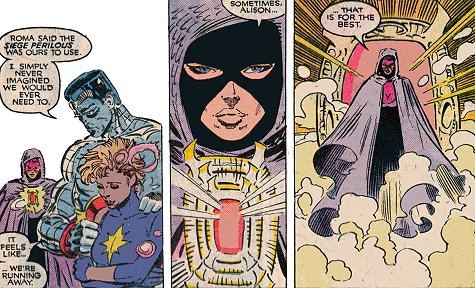 killed by the Reavers if they returned to Australia. After the mission, Gateway teleported them back to the Outback and Betsy could already telepathically sense the Reavers. The team was in no shape to fight, so Betsy suggested to use the crystal as an escape. After a short discussion, Dazzler and Colossus stepped through willingly, but Havok needed a little telepathic push. Psylocke entered last, right as the Reavers arrived. Pierce was mad to have been robbed of his revenge and crushed the shrinking crystal. [Uncanny X-Men #251] 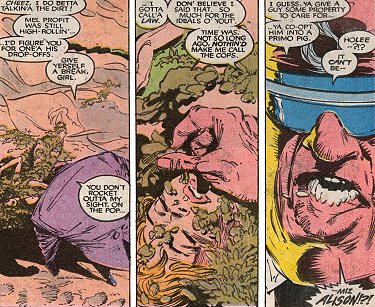 Dazzler was found washed ashore on Malibu beach by Lila Cheney’s bodyguard, Guido. He took her into Lila’s villa, although Cheney was not present. Through the various computer files of Lila’s mansion, Dazzler learned about her former life as songstress and reluctant superhero, even though she could not remember it. Alison went clubbing and was recognized by a guy who recently found the only remaining copy of the yet unreleased movie that Dazzler had taken part in. 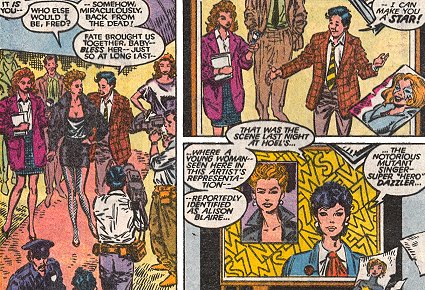 With Dazzler‘s miraculous return from the dead and the mystery of her technical invisibility, the movie could be promoted very easily and Alison Blaire again became a media celebrity. Yet, it also drew some unwanted attention. Back when Eric Beale was blackmailing Alison and she refused by burning the movie, she had no idea that his entire fortune was dependent on it. He was now totally broke and had developed a fixation on Dazzler. He blamed her for everything that went wrong in his life. Hearing of her return, he unsuccessfully tried to kill her a few times and, finally, kidnapped her on the evening of her movie premiere. 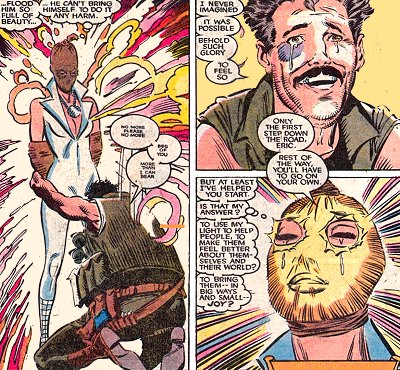 She awoke tied up in Beale‘s place, which actually was a shrine full of Dazzler pictures, and Beale tried to kill her once more. However, Alison used her light powers to soothe the man and make him see the beauty of life. The incident showed Dazzler that there were more important things than being a star. [Uncanny X-Men #259-260]