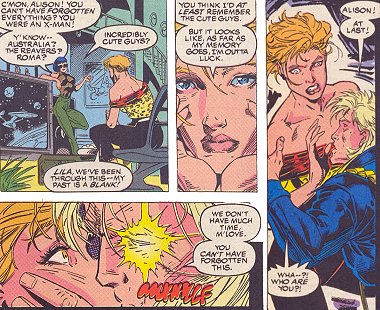 Weeks later, Longshot contacted Lila and Dazzler for help, as he was on the run from Spiral and other bounty hunters of the Mojoverse. Lila tried to teleport them all to safety, but something screwed up her power and they ended up trapped in the Mojoverse.

Having no other choice, Lila and Alison fought alongside Longshot in his rebellion. Even though Dazzler could not remember their times together among the X-Men, Alison felt she could trust and love this man. Fighting side-by-side in the rebellion, her memories returned over time. [X-Men (2nd series) #5-7] 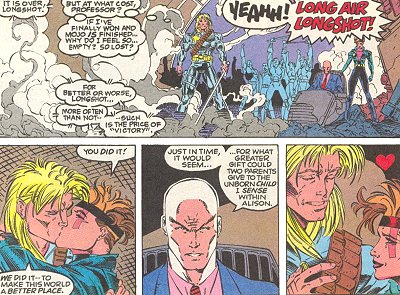 When her friends were captured, Alison managed to contact the X-Men for help. However, they ended up captives of Mojo as well. While his students had to star in Mojo’s movies, Xavier tried to break their mental hold and Alison worked together with some rebels. In the end, they overcame the dictator and a new era for the Mojoverse began. Surprisingly, Xavier sensed that Alison was pregnant and so the happy couple decided to hand rulership to Mojo II, the Sequel. [X-Men (2nd series) #10-11] 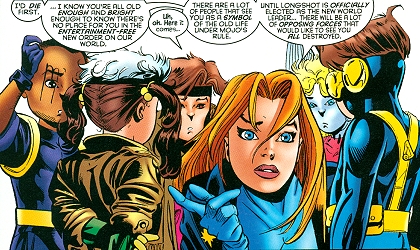 Off-panel, Ali and Longshot married (or had a similar ceremony in the Mojoverse), however things did not turn out well. Something seems to have happened to the unborn child, because when Dazzler next met the X-Men and Iceman tried to ask her about the child, Jean stopped him in midsentence. She sensed that there no longer was another life within Alison and, apparently, she had miscarried the baby. Instead, she took in the X-Babies, who were hunted by various parties, as they still represented the cruel rule of Mojo. [X-Men (2nd series) #47] 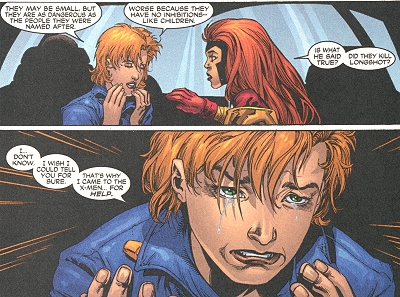 Some time later, Mojo returned and wrested control of his dimension again. He tried out a new media project: baby versions of the Age of Apocalypse villains, but they became out of control and went on a rampage through the Mojoverse. Many people were killed and the villains claimed that even Longshot was among their victims. Dazzler escaped and tried to get the X-Men to help, only they were in a the middle of a crisis themselves, as Magneto was about to start a third World War and Xavier was captive on Genosha. Dazzler joined Jean’s quickly-assembled squad of mostly untrained mutants and they infiltrated Genosha, but were soon discovered by Magneto. 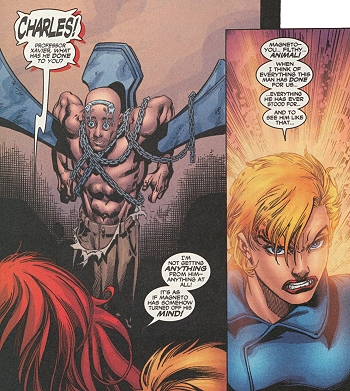 When Dazzler saw Xavier crucified in the middle of Magda Square, she angrily lashed out at the master of magnetism, only to have her blast redirected at her and was pulverized to ashes. Yet, as it turned out, the battle had taken place on the astral plane. Jean secretly entered the minds of all combatants and, while they continued to fight, Dazzler traded place with Xavier, disguising herself as him with a holographic light projection. After Magneto was defeated and the X-Men had returned home, they offered to help Dazzler to get back to the Mojoverse, but she refused. Apparently, too much had happened on that day and Alison departed. [Eve of Destruction]

Dazzler returned to singing, but as she was re-building her musical career, an insane fan threatened to kill her, so Dazzler’s manager hired Deadpool to protect her, against Alison’s will, who thought she could handle herself or ask the X-Men to help. When Deadpool asked why she did not do that he apparently struck a nerve. It seemed that Dazzler carried a grudge against the team. [Deadpool (2nd series) #67]

Regarding her music, Alison shared the fate of many one-hit wonders and others singers who are famous for a certain style. Even though she had personally moved on from her disco days, sporting a somewhat rougher attitude and a pink-died short haircut, fans fondly remembered the Dazzler of old. That’s why she had to wear a blond wig on stage as well as put on her stage costume and make-up again; after all she needed to earn a living. 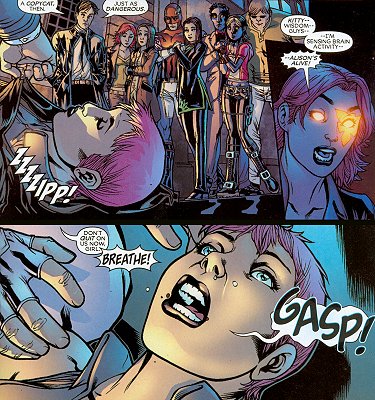 After a gig in London, she witnessed a businessman being hunted down by Shadow X, evil versions of the original five X-Men from an alternate reality. Dazzler decided to get involved and held her ground for a while, but, outnumbered five to one, she was eventually killed by Jean Grey, who telekinetically crushed her heart. British Agent Pete Wisdom informed Captain Britain and several former X-Men of Alison’s death. To everyone’s surprise, though, Dazzler miraculously resurrected herself, showing no ill after-effects of being clinically dead for 93 minutes. The heroes eventually tracked down and detained Shadow X. Afterwards, they decided to stay together as a new version of Excalibur, to deal with any and all problems arising in England. [New Excalibur #1-3]

Dazzler quickly became best friends with her teammate Nocturne, the two of them sharing the same interests. [New Excalibur #4-5] 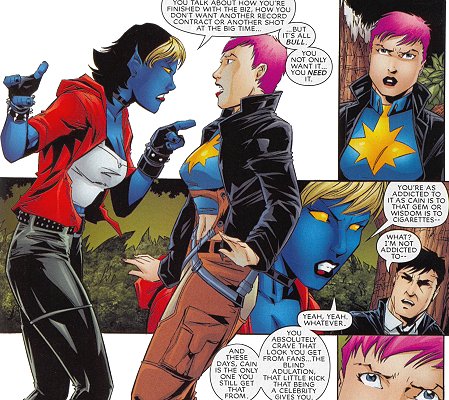 However, the new friendship was put under a strain a few weeks after the team’s formation. Apparently, Nocturne had developed romantic feelings for the Juggernaut, who has chosen not to reciprocate, having only eyes for Dazzler, on whom he has had a crush ever since he first heard her sing years ago. Nocturne went as far as accusing Dazzler of toying with Cain’s emotions as she was addicted to fame and he was the only one still adoring her. Partially though, her outburst was influenced by a demon Cyttorak, who was boosting Excalibur’s negative emotions to cause some dissention in their ranks. [New Excalibur #13-15]

In fact, Dazzler actually had the chance to re-new her music career full time. Next to her duties among Excalibur, Alison has been doing a few music gigs in London and, during one of them, she met a talent scout who was blown away by Dazzler’s performance. He offered her to do a demo tape for his record label, but Alison declined, explaining that she already had it all - albums, fame and even a movie, and that she couldn’t care less about it. The only thing that still mattered to her was the music itself, and for that she didn’t need a record label. [New Excalibur #8]

During Excalibur’s missions, Dazzler has been killed two more times by an opponent, yet has beaten death each time. While everyone else is greatly concerned by this, Alison herself tries to avoid the subject and was rather hesitant to let herself be examined. 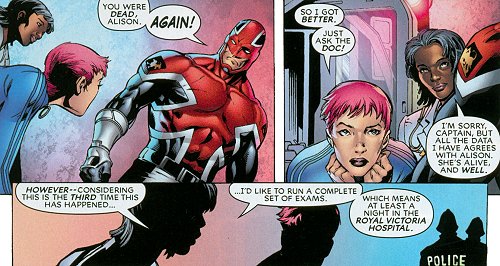 So far, the medical tests have been unable to provide an answer for Dazzler’s apparent immortality, and it remains to be seen what the source of this new power is. [New Excalibur #6-7, 16]