BIOGRAPHY - Page 1
Born into a rich family, Emma Frost is the second of three daughters. She also has an older brother, Christian. The dynamics of Emma’s family life played a profound role in shaping her future goals and personality. Her father, Winston, was a domineering figure who had impossibly high standards for his children. He was cold, ruthless and unflinchingly demanding of his family. He offered little support, encouragement or love to his children. Emma’s mother was a fragile woman who numbed herself to the tensions in her marriage and household by abusing prescription drugs. The beautiful and vain Adrienne was the ambitious one, always scheming to win her father’s favor… and his fortune. Cordelia was the rebellious one, willing to do whatever it took to win a little of her father’s attention, no matter who might get hurt as a result. Christian was carefree and playful once he stopped caring what his father thought of him. He was Emma’s sole friend and ally in the dysfunctional Frost household, which was filled with power games, manipulation and secrets. 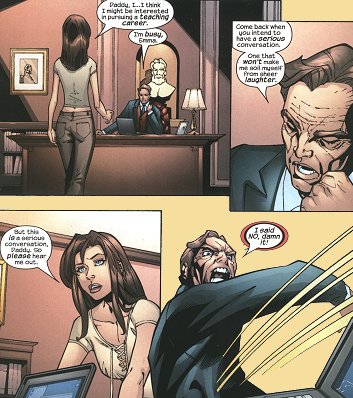 As a teenager, Emma tried to reason with her father. She did the things he asked of as best she could, not out of a desire for personal gain so much as from a need for a normal teenage existence. The emergence of her telepathic powers only added to the mounting tensions that Emma already faced on a daily basis. She subconsciously used her powers to excel at school, picking up ideas and thoughts from her classmates. Emma achieved academic success and received validation from her teacher, Ian Kendall, on whom she had an immense crush. Emma announced to her father that she wanted to pursue a career in teaching. Naturally, her father was infuriated by this idea. Thinking that Emma was being influenced by Mr. Kendall, Winston Frost had him fired. [Emma Frost #1-4] 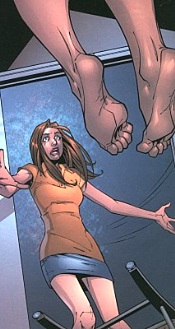 Emma began to see the deceit and manipulations of her father and sisters when she herself became a target of their malicious power plays. Angered by the hurt and pain they had caused her and those she cared for, Emma fought back. She discovered her father’s affairs and blackmailed him, exposed Adrienne’s secret modeling career and more. In retaliation, Adrienne revealed to their father that Christian was gay, a secret Emma herself had only recently learned. When Winston Frost learned this, he arranged for Christian’s lover to be framed for dealing drugs and deported. In utter despair, Christian attempted suicide. Emma found Christian and called for help. He survived but fell into a deep depression and drug addiction. Desperate to save the only person in her life she truly loved, Emma went to her father in the hopes he might help Christian. [Emma Frost #5-6] 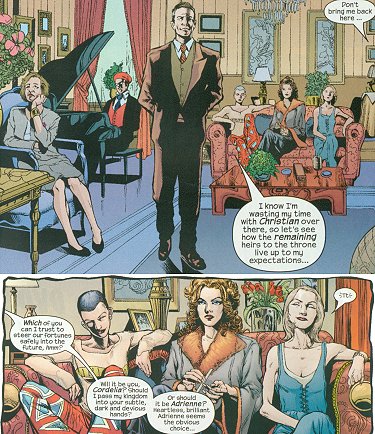 Winston confessed to Emma that he was surprised and impressed by her guile and attempts at deceitfulness. He agreed to get Christian the help that he needed. This same night, he decided that the time had come to name his heir. Emma’s father considered which of the girls to choose – with Christian obviously being a non-acceptable option. Finally, much to the surprise of the others, he settled on “rebellious, little Emma.” His announcement was interrupted by a doctor from a mental institution, who had come to collect Christian. Emma was enraged and, to the surprise of all present, refused the family fortune. She decided to make her own way instead, with her entire fortune consisting of 400 Dollars. [New X-Men #139, Emma Frost #6]

Emma would later tell her students in Generation X something different about her past, though. She claimed that her parents were ashamed of their apparently insane daughter, who kept hearing voices in her head, and that they had her locked away in a mental asylum. In the institute, the teenager was easy prey for the doctors and the guards until, one day, it occurred to Emma that, if she could hear their thoughts, then maybe she could make them listen to hers as well. With her growing telepathy, Emma took over a guard and used him to fight the way out of the asylum and set it on fire. She did not even look back as she left. [Generation X #48, 24]
[Note: As it seems, these events never took place, and it was just a story Emma told her charges to make them a bit more sympathetic towards her. Obviously, her brother’s unfortunate fate served as an inspiration for Emma’s lies.]

Determined to make it on her own, Emma left the family home and moved to Boston, taking odd jobs as a sales girl and dishwasher to try and survive. The pampered Emma was not cut out for such work and fell on hard times until she met a young man named Troy Killkelly. Troy took Emma in and the two became romantically involved. However, Troy owed money to a local gangster named Lucien and Emma’s happiness was to be short-lived. 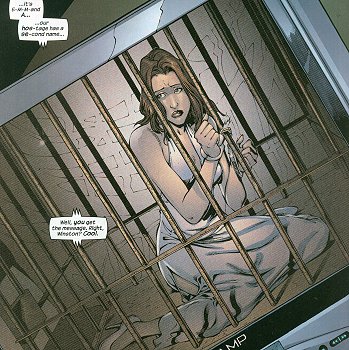 Various other schemes to make money having failed, Troy came up with the idea to have Lucien’s gang pretend to kidnap Emma and extort ransom money from her father. Lucien tried to blackmail Winston Frost into paying for Emma’s safe release but Winston refused to pay, claiming that his daughter was worth nothing to him. Enraged, Lucien decided to hold Emma hostage for real. When Troy tried to stop him, he was shot and killed.

Seeing an opportunity to burn her father, Adrienne released the ransom video to the media. Winston was left with no choice but to pay in order to avoid a public disgrace. Realizing that the gang planned to kill her once they received the ransom, Emma used her mental powers to subtly turn them against each other. Their greed, mistrust and anxiety amplified by Emma’s powers, the gang members killed each other off one by one. Emma escaped and used knowledge gleaned from her captors to claim the ransom money herself. With 160,000 dollars, she embarked on a new life as a student at Empire State University in New York City. [Emma Frost #7-12]

Along with her new life, Emma also adopted a new look - she bleached her hair blonde. At university, Emma quickly befriended her roommate, Christie McDermott, but it was two other people who would shape her life for years to come. One was a telepath by the name of Astrid Bloom. Though around Emma’s age, she was much more skilled in the use of her powers, and she taught Emma new tricks, such as reading people’s past memories instead of just their present thoughts, and how to speed-learn by piggybacking on other student’s focused and organized thoughts when they were learning in the library. The other important person was Ian Kendall, Emma‘s old high school teacher, who was now working as a university mentor, and briefly in a relationship with Christie before Emma seduced him back. When Christie threatened to report their relationship, Ian suddenly went mad and almost strangled her. However, Emma discovered that all of this was Astrid’s doing – afraid of losing Emma’s companionship, Astrid had manipulated the people around her for weeks, determined to show her that mutants were superior and had to stick together. 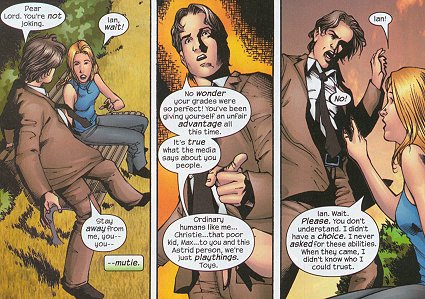 In a direct conflict, though, Emma turned out to be the more powerful telepath, leaving Astrid in a catatonic state. Afterwards, Emma confided in Ian about her being a mutant and what all went on. She was looking for love and comfort, but the man had only hatred and disgust for her. The only person that meant something to her having ditched her, Emma grew cold and bitter, and she began to share the idea of mutant superiority. It didn’t help either that, around the same time, the general public had learned of the existence of mutants, leading to some massive anti-mutant hysteria. [Emma Frost #13-18]

In the times that followed, Emma had no more scruples to use her mental powers for her own advantage and to take whatever she wanted. 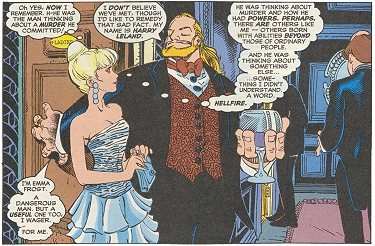 Parallel to earning her degrees in business and education, she attended the parties of Manhattan’s high society with faked invitations. Standing next to the Wall Street elite, Emma mentally gained enough inside knowledge to make a fortune. During one of these parties, she got to know Harry Leland and immediately realized that, although he was a dangerous man, he would become very useful to her.

Having overtaxed her telepathy, Emma left the party, only to run into some bullies who wanted to have some fun with the beautiful teenager. Before anything serious happened, Emma was saved by the Dark Beast, an alternate version of 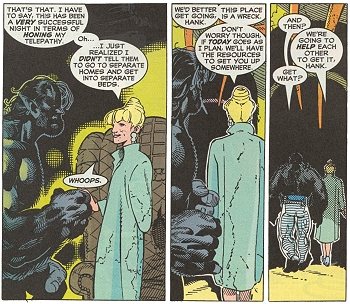 Hank McCoy from the timeline known as Age of Apocalypse. McCoy had been transported from his own reality twenty years into the past of the main Marvel Universe, but his memory was fractured and he was partially amnesiac. He only remembered that he had performed some experiments and was trying to do the same in New York’s sewers. He and Emma decided to help each other; she telepathically helped restore his mind and, with her growing fortune, set him up a new lab. It is not fully known how long their partnership lasted and what exactly Emma did get in return, though possibly he helped her further hone her mental powers and also might have provided her with some special equipment. [Generation X #minus 1]

When the Hellfire Club was hiring dancers, Emma auditioned (possibly thanks to her connections with Leland), dressed in what would later become her White Queen outfit. With her telepathy, she could make the audition believe she was a brilliant dancer. Meeting Sebastian Shaw, who became her mentor, Emma rose in the ranks of the Hellfire Club, also undergoing cosmetic surgery to become the perfect “Ice Queen. The dominatrix from hell.” Unlike most other women, Emma was not ashamed by the Hellfire Club’s strict dress code that forced females to walk around in nothing more than lingerie. Actually, she liked it as it gave her psychological power. Because of her revealing outfit, men were easily distracted and usually underestimated her, thinking her to be nothing more than a mere waitress. [New X-Men #139, Classic X-Men #34]

Over the next years, Emma built her own empire, including Frost Enterprises and a private school in Massachusetts. Simply being part of this organization was not enough for Shaw, he wanted to rule it. At first, he tried to buy his way into the Council of the Chosen, as he helped the Club’s leader Ned Buckman to fund Project Armageddon, without knowing that Buckman wanted to use the

Project’s Sentinels to totally eradicate mutantkind. When the Sentinels killed Shaw’s lover, Lourdes Chantal, Shaw and Emma wanted revenge. They attacked during a meeting of the Council and Emma took mental control of Ned Buckman’s mind, making him shoot all the members, including the former White Queen, Paris Seville, and Buckman himself. That night, Shaw and Frost rose as the Black King and White Queen of the new Inner Circle and they soon started to fill the other positions with their friends, like Harry Leland and Donald Pierce. [Classic X-Men #7]