BIOGRAPHY - Page 3
With the rise of more and more threats to mutants in general, the Hellfire Club and the X-Men decided to ally themselves after they successfully worked together to battle Nimrod, a super Sentinel from the future. Magneto was offered the seat of White King and, after pondering on whether to accept or not, he joined the club together with Storm, who was the leader of the X-Men at that time. Emma was one of those who welcomed the addition and she took great effort to bring Magneto up to date in the club’s affairs.
[Uncanny X-Men #210, New Mutants (1st series) #51, Uncanny X-Men #219]

Soon, Magneto and his students found themselves invited to one of the many parties at the Hellfire Club and the former enmity between the New Mutants and the Hellions developed into a friendly rivalry.

Much to the surprise of her teammates, Magma even transferred to the Massachusetts Academy after finding that she had feelings for Empath and Emma commented that the young woman from Nova Roma would be more at home with the Academy’s elegant environment anyway. Though she apparently really cared for him, Empath subtly influenced Magma on Emma’s orders, as she had certain business interests in the area of the Amazonas and needed Amara’s father on her side. [New Mutants (1st series) #53-54, 57, 62]

After the X-Men supposedly died in Dallas, the balance within the Inner Circle was in danger. Now, Magneto no longer was the representative of the hero team, he was only in charge of an untrained bunch of trainees that repeatedly disobeyed his orders. Emma realized that Shaw and Magneto did not get along and carefully pitted them against each other. 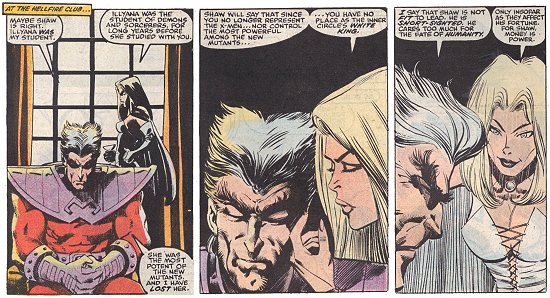 Finally, after Inferno, Shaw blamed Magneto that the demonic mess was his fault, as he apparently did not have full control over Magik. With her reduced to early childhood, the most promising of the New Mutants was lost to them. Shaw wanted Magneto out of the Circle and challenged him to a duel, but lost. Knowing that only one of them could remain as King, the matter was put to a vote. Promising her a free hand in the Amazonian area, Emma dragged Selene to her side and, together, the three voted Shaw out of the Hellfire Club. [New Mutants (1st series) #74-75] In retrospect, this might have been a bad move as Magneto soon lost interest in the Inner Circle and departed. On the other hand, though, Shaw was almost assassinated by his own son, forcing him to go into hiding and let everyone else believe him dead. Neither King would have remained with Emma for long.

Around the same time, Firestar had to learn that the White Queen was a woman who carried grudges. Still bound by her promise to never interfere with her again, Emma tipped off Firestar’s real name and location to Freedom Force, who immediately wanted to make her sign the Mutant Registration Act.[Marvel Comics Presents #78] 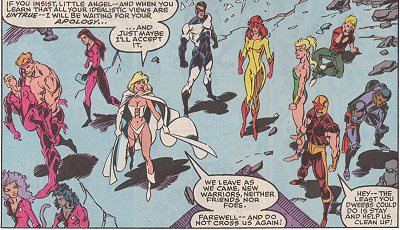 Yet, the resourceful young woman managed to avoid it and, several weeks later, joined the New Warriors. Discovering that somebody had hacked into her databanks (Night Trasher did it to learn how to contact Firestar), the White Queen thought that she was no longer bound by her vow and she investigated together with her Hellions. They tracked the hacker down to the New Warriors headquarters and, wanting Firestar back, they fought the team over her fate. However, the Warriors beat the Hellions and the White Queen left, though not before laughing at Firestar’s idealism, telling her that one day she would come back to her and apologize. [New Warriors (1st series) #9-10]

Learning that the members of the Hellfire Club were under attack by the Upstarts, Emma contacted the X-Men for help and they came to another party she was hosting. Suddenly, Trevor Fitzroy teleported in, ready to attack the White Queen while his personal Sentinels were slaughtering the Reavers in Australia. Donald Pierce tried to escape and ordered Gateway to take him to the person responsible, but a few Sentinels followed him into the warpgate. They emerged at the Hellfire party and one of the first Sentinel blasts hit Emma Frost. Empath thought her dead, not feeling any emotions from her. 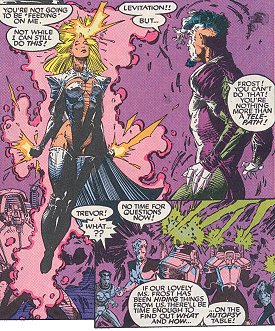 Despite the X-Men’s good intentions, the Hellions were killed one by one by either Fitzroy or the mutant hunting robots, who finally started to attack Jean Grey. In the last instant, Jean managed to transfer her consciousness into Frost’s comatose body. When she later awoke, she discovered that Fitzroy had claimed it as a prize but she took him by surprise when she managed to generate a telekinetic field in the White Queen’s body. Later, the X-Men retrieved her and Xavier helped her back into her own body, while the comatose Emma was brought to the mansion’s sick bay. [Uncanny X-Men #281-284]