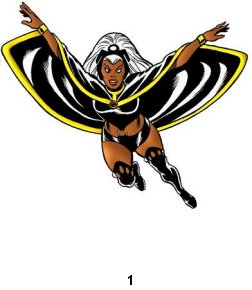 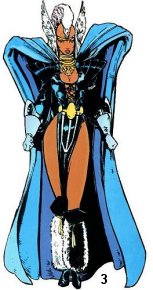 1) The costume given to Storm when she joined the X-Men basically consisted of a bikini suit held together by a gold ring, thigh-high boots and a mix between a cape and a poncho with gold trimming covering her upper arms and fastened to her back and her gold bracelets. Her own additions were the tiara she used to wear in Kenya and the ruby gemstone given to her by her mother (or a facsimile thereof), which was used as a brooch to hold together the cape. This was considered one of the definitive Storm looks, although certain elements of the outfit quickly grew dated. [Giant Size X-Men #1]

2) After an extended stay in space, Storm changed. Egged on by Yukio during a stay in Tokyo, Ororo's internal change also manifested in her look. Having become tougher, Storm cut off her hair to a short Mohawk and wore a punk outfit, consisting of leather pants, a tight shirt and boots, matched with the vest she won from Callisto as a symbol of her leadership of the Morlocks. The ensemble was complete with strong eye-make-up and she also took to wearing different kinds of earrings with her uniform, the lightning bolt earrings eventually becoming a standard part of her outfit. [Uncanny X-Men (1st series) #173]

3) Shortly after she lost her elemental powers, Ororo was kidnapped by Loki and offered the chance to become the new Goddess of Thunder. While under Loki's influence, Ororo wore this Asgardian ensemble and was given a replica of Thor's hammer. This hammer simulated Thor's own weather-controlling abilties. In addition to the costume shown here, she also wore a similar outfit that featured chainmail armor on her legs and arms. [New Mutants Special Edition #1] 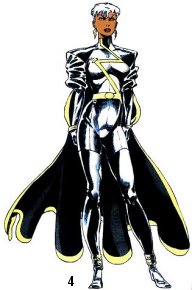 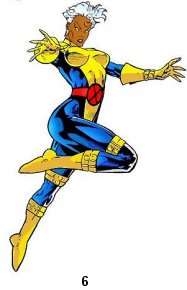 4) After Storm regained her powers, she adopted a look that combined elements of both her previous incarnations: a long-sleeved black-leather suit with a lightning bolt motif on her chest, combined with a cape that was split in two parts at the back- similar to her old cape. Her hairstyle was also a combination of her previous looks. While it was long again, her head was still shaved at the sides. [Uncanny X-Men (1st series) #230] The image presented here stems from a later time period when Ororo briefly wore this uniform again, hence the short hair.

-) When Storm was reduced to a child, for the most time she wore street clothes. Only after she remembered her life as an X-Man and returned to Westchester, she came to wear Moira MacTaggert’s improved versions of the basic blue-and-gold X-uniforms. [Uncanny X-Men Annual #14]

5) After shortly being turned into a Genoshan mutate, Storm’s hair was shaved off completely. It quickly grew back and she wore it in a stylish, short look with somewhat longer hair on top. Briefly, Ororo returned to her costume from the Australia days. [Uncanny X-Men (1st series) #273]

6) However, she soon switched again to the updated basic X-uniform worn by all her teammates at the time. The idea was to give the recently re-united X-Men a team feeling. [Uncanny X-Men (1st series) #276] 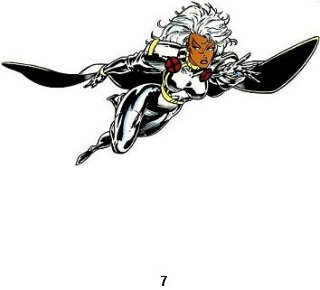 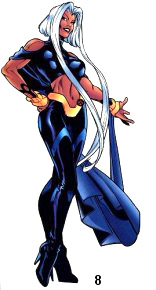 7) The original five X-Men rejoining and the group splitting up into two strikeforces marked the return of individual uniforms. Her hair grown back, Storm took to wearing another long-sleeved black leather suit, similar to the one worn in the outback, though without the lightning bolt motif. Her cape was attached in front with two X-symbols encircled in red. She wore the outfit for a long time and it is probably her best-known look. [X-Men (2nd series) #1]

8/9) After a grueling adventure with the Morlocks, Storm decided she needed a new more stylish look: She cut her hair to chin length, keeping a longer strand of hair in front of each side. She wore a tight top that left her mid-riff and shoulders free. Attached were two ribbons instead of a cape that could be connected to her bracelets. This was combined with long low-cut pants and clunky boots. The combination was first presented in black and gold, but she quickly switched to a purple/silver combination. After her hair grew back, she combined the look with her classic tiara and some time after removed the ribbons. [Storm (1st series) #4, X-Men (2nd series) #62, 71] 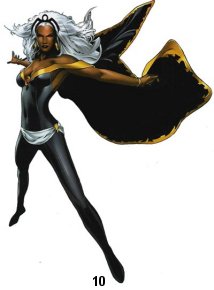 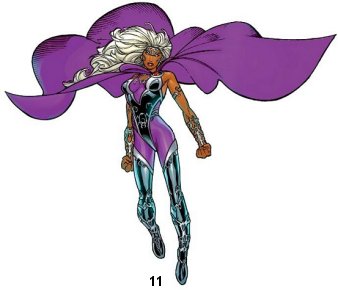 10) Shortly before the Twelve saga, Storm opted for a more classical look: a bodysuit that left her shoulder and arms free and had a low neck with a ruby ornament. Her cape, trimmed with gold, was connected to the outfit with a lightning bolt motif that covered her upper arms and was held together by the ruby gemstone. In addition, she wore a sash with tiny lightning bolts. She wore that outfit both in two color schemes - purple and black/gold. [Uncanny X-Men (1st series) #372]

11) In the following months, all the X-Men got new costumes and, while most of them opted for a team look, Storm’s look was very different; a black swimming suit, showing a lot of cleavage, worn over a purple body suit. The ensemble was completed by back ankle-length boots a purple cape, held together with an X-brooch and silvery filigree adorning the outfit. The costume didn’t last very long and was soon replaced ... [Uncanny X-Men (1st series) #381]

12) ... with a black bodysuit that left Storm’s arms free. The outfit was adorned by a golden-neckline and low-cut belt, reminiscent of Egyptian jewelry. Her arms were covered by long black gloves, which left her fingers free. In addition, the outfit sported a back cape with gold trimming, which was crossed over the neckline and attached in an asymmetrical way to her shoulder and waist with an X-symbol each. In addition, Storm wore her hair pulled back in a practical ponytail and she kept her hair out of her face with a simpler version of her tiara. [Uncanny X-Men (1st series) #383] 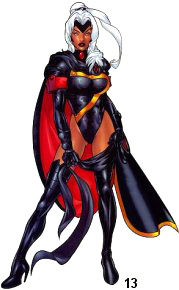 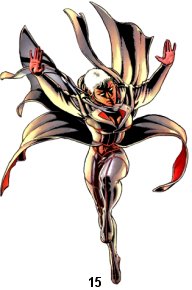 13) The costume Storm wore when she and several others left the mansion to search for the diaries of the late Destiny was a Christmas gift given to her by Yukio. A black, short-sleeved bathing suit with a lightning motif on her chest, cut very high, showing a lot of leg, combined with long gloves and thigh-high stiletto boots, a red-trimmed cape (black and red being the team’s colors), a simple tiara and her mother’s ruby as a choker. [X-Treme X-Men (1st series) #1]

-) After Jean Grey braided her hair in a typically African style, she also changed her costume to a full-body leather outfit with belts and buckles. Storm kept the hairstyle for a while, but quickly ditched the outfit. [X-Treme X-Men (1st series) #9]

14) During an adventure at the Xavier Institute, Storm was given a version of the school uniform by Emma Frost. A typical gray sweater with an X-emblem in front as worn by several of Xavier’s X-Men, although short enough to leave her mid-riff bare. In addition, Storm wore a micro-skirt, thigh-high boots and a ponytail held back by a huge gold hairclip. [X-Treme X-Men (1st series) #23] In the following weeks, Ororo wore the current standard outfit from Xavier’s, meaning some leather pants, dark shirts and a black and yellow leather jacket. [X-Treme X-Men (1st series) #25]

15) Eventually, the entire X-Treme X-Men opted to wear more street wear like outfits in rather dark colors. In Ororo’s case, it was a black or gray pantsuit with red lining and a matching trench coat and scarf. In addition to that, she swore her hair short – although thanks to Masque’s tampering that didn’t last very long. [X-Treme X-Men (1st series) #35] 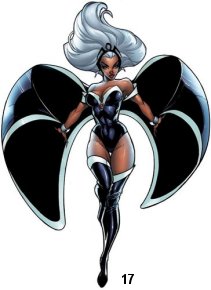 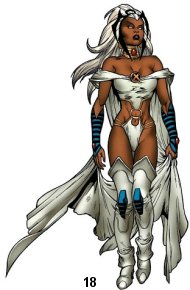 16) As a fighter in the Arena, Storm wore a large number of strange exotic outfits. Presented here is just one of them, as an example. [X-Treme X-Men (1st series) #36-39]

-) After Storm’s group returned to Westchester, and all of the X-Men going back to more superhero-like uniforms, Storm adopted an old look - the black and yellow version of the outfit she had worn around the Twelve saga. [Uncanny X-Men (1st series) #444] After joining the Fantastic Four, she made some slight modifications to the uniform to fit the black-and-white color scheme of the team, replacing the yellow accents with white. [Fantastic Four (1st series) #544]

17) Upon returning to the X-Men temporarily from the Fantastic Four, Storm also adopted a variant on the above costume. Although it kept the same basic design, this version replaced the full body suit with a one piece bathing suit and thigh-high boots. Ororo would switch back and forth between the two looks interchangeably over the next few years. [Uncanny X-Men (1st series) #487]

18) While working with Cyclops's Alpha Team in San Francisco, Storm occasionally wore a different uniform, essentially a white version of her original costume. It consisted of a strapless two-piece held together by a golden ring near her navel. An 'X' buckle rested on the center of her chest and affixed her cape to the rest of the suit. She also wore high boots, arm bands, a golden ring choker, and her traditional tiara. [Astonishing X-Men (3rd series) #25] 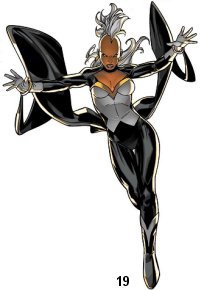 19) After returning to her mohawk hairstyle, Storm changed outfits as well. She wore a black bodysuit with leggings, exposing her chest but covering her arms and neck. The suit had a stylized white 'X' on the front with gold trim at the top, and slits cut into the back to let her breathe. She wore white gloves and boots with white trim. A partial cape was attached to the backside of her costume, and occasionally to her wrists by golden bracelets. [Uncanny X-Force (2nd series) #1]