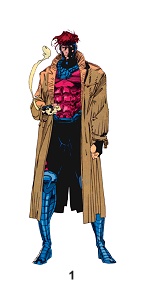 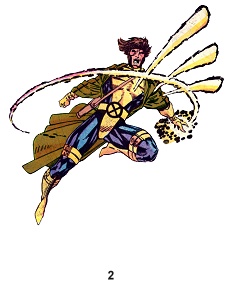 1) When Gambit first met Storm, he wore a rather unique form-fitting costume, with the pants and sleeves colored black with stripes of magenta and the torso entirely magenta. He also wore knee-high metallic boots, fingerless gloves and a headdress and was rarely seen without a long brown trenchcoat. This outfit is most closely associated with Gambit and he has worn it for the longest time. [Uncanny X-Men (1st series) #266]

2) For a short time, all X-Men, including Gambit, wore Dr. MacTaggert’s new design of the classic blue and gold X-Men uniforms. Gambit once more combined it with a headdress and his coat. [Uncanny X-Men (1st series) #273]

-) With the original five X-Men rejoining and the X-Men dividing into two strikeforces, the group returned to wearing individual uniforms. Many of them, including Gambit, donned the same outfits as before. [X-Men (2nd series) #1]

3) For a time, the X-Men were abducted to space to help battle an alien invasion. They had nothing to wear but some Shi’Ar mining suits and other uniforms. Remy chose a dark blue suit with some metallic bodyarmor elements, though not too much to hinder his movements. The meaning of the Shi’ar symbol on the chest is unknown. It was in this costume that he was abandoned in Antarctic by his fellow X-Men. [Uncanny X-Men (1st series) #342]

-) Back to civilization, Remy returned to his default uniform. 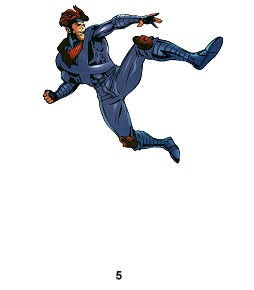 4) Only when, many months later, all X-Men re-designed their costumes, Gambit too changed his costume. While most of the team chose to go with a team look, displaying a prominent X-symbol, Gambit wore only a blue-black bodysuit with some red accessories (scarf, belt with a tiny x-buckle), large metallic boots with red knee-caps and, of course, his trenchcoat and headdress. [Uncanny X-Men (1st series) #381]

5) When he was with the Thieves Guild or had other adventures outside the X-Men, his look was similar, though slightly more street-look with his baggier pants. However, at those times, he often also wore a shirt with a prominent X-symbol. [Gambit (3rd series) #16-17]

6) When Gambit left Xavier’s School and started hanging around the fringes of the X-Treme X-Men, he adopted, whether intentional or not, a look more consistent with theirs: an entirely black bodysuit with a belt, combat boots, kneepads and other accessories all in the same color. This was, of course, off-set by his ubiquitous trenchcoat. [X-Treme X-Men #4] 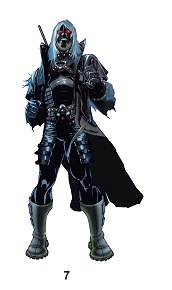 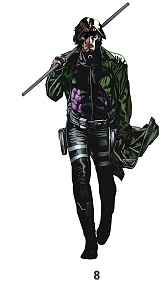 7) As Apocalypse’s Horseman Death, Remy still wore his trademark trenchcoat but underneath was a black bodysuit with several pieces of metallic body armor that were held in place with dark leather straps. [X-Men (2nd series) #184]

-) After Mr. Sinister helped Remy to return to his regular self, he went back to wearing his original costume. [X-Men (2nd series) #200]

8) Eventually, Gambit slightly updated his classic look, keeping the pants and the coat, but settling for a streamlined version of his top. It no longer displays the metallic neck area and is mainly black with magenta areas on both sides of his abdomen that are only visible if he keeps the trenchcoat open. [X-Men Legacy #229]